Liverpool edged their way into the Champions League quarter-finals despite losing 1-0 at home to Inter Milan, who were reduced to ten men late on. Just as they had to in the first leg, Jurgen Klopp’s side had to pull out all the stops to make it into the last eight, as they hit the woodwork on three separate occasions.

Mo Salah was unusually wasteful at Anfield as Liverpool spurned several golden chances to make life more comfortable for themselves, as Simone Inzaghi’s side kept the tie alive with a gameplan reliant on intensity.

Liverpool were far from their best tonight and will have to be much better if they are to win this competition, but the most important thing is that they have made it through. Meanwhile, the Serie A champions, who were desperately unfortunate to lose the second leg, will be thinking ‘what if?’ on the plane home after an even 180 minutes.

The visitors had the first effort as Denzel Dumfries saw his effort go straight at Alisson, and on a blustery evening on Merseyside, the away side were hoping to cook up a storm in front of a vocal visiting support.

The best chance of a quiet first half came as Joel Matip flicked Trent Alexander-Arnold’s free-kick onto the bar, before Virgil van Dijk had his header brilliantly blocked by Milan Skriniar from the resulting corner. Time and time again, the right-back’s delivery was causing the Italian champions issues, and the Reds should have been in front as a result.

Alisson had to parry a low Inter free-kick but was relatively untested in a quiet first half, while Alexis Sanchez should have seen red before the break as he went in late and high on Thiago before Alexander-Arnold whipped a free-kick inches wide of the post moments before the break.

Liverpool should have got the lead at the start of the second half as Inter goalkeeper Samir Handanovic punched the ball straight to the feet of Salah under pressure from Diogo Jota, but the Egyptian saw his effort come back off the post when the goal was gaping in front of the Kop. 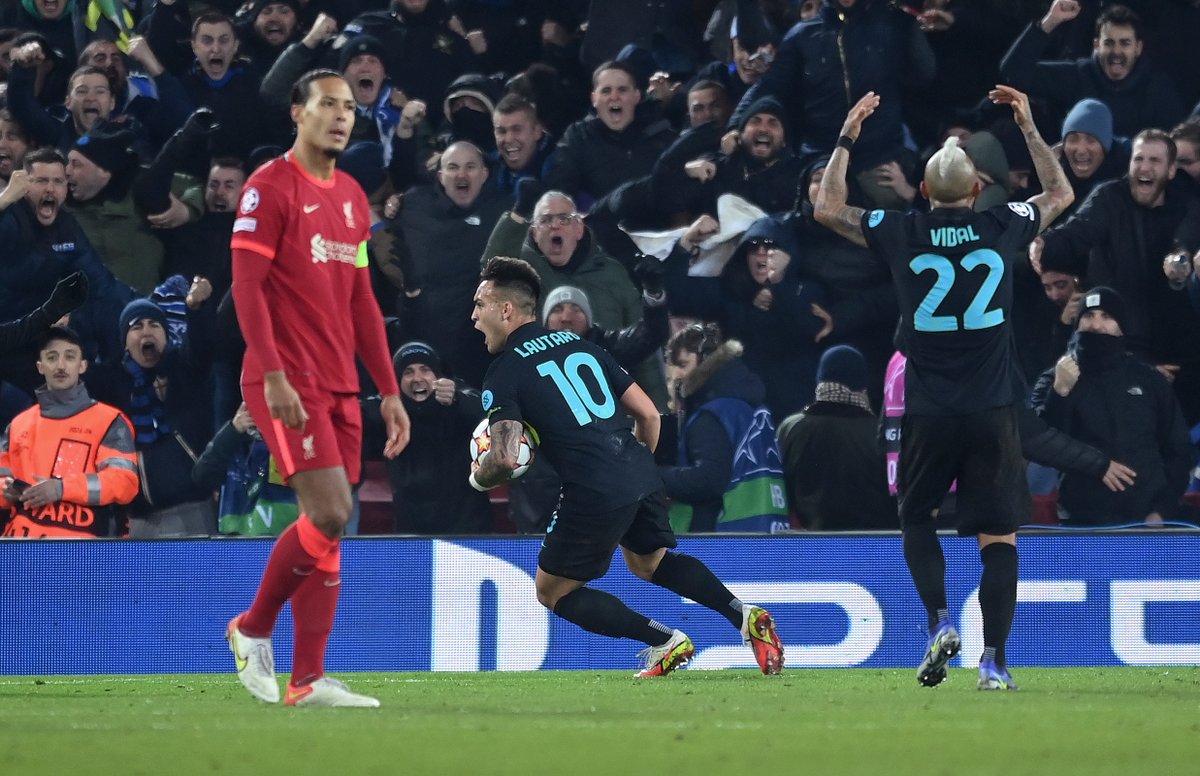 Lautaro Martinez saw his effort deflected wide from inside the box and Inter kept on coming, before the captain fired one into the top corner. He was fed the ball from Sanchez, and from outside the box, drilled the ball into the net past a helpless Alisson to give the visitors real belief heading into the closing stages.

However, hopes of a comeback were dashed by the Chilean as he was sent off moments later. He got a touch to the ball before Fabinho but his follow through caught the Brazilian, and he was harshly shown a second yellow, having fortunately escaped a straight red in the first half.

Salah should have made them pay but saw his effort fly past Handanovic and once again come off the post. It meant that Liverpool had hit the crossbar, the left post and right post on a night when they strangely lacked that clinical edge in front of goal.

In injury time, just as Liverpool looked to kill the game off, substitute Luis Diaz was just six yards out and ready to seal the tie when Arturo Vidal came from nowhere to pull off an incredible block. It was goal-saving, but also summed up just how wasteful the Reds had been in front of goal on a night where they made it through to the last eight.

Meanwhile, in the other Champions League match tonight, Bayern Munich ran riot against RB Salzburg as Robert Lewandowski scored three in a 7-1 win. A few questioned their ability after the 1-1 draw in the first leg but they silenced their critics with an outstanding display that once again asserts themselves as serious contenders for the European crown.