Boxing
News
Two former world champions will return to reassert themselves and begin the climb back to the thrones they once ruled from with iron fists
Joey Mills
17:24, 18 Aug 2022

October is officially the spookiest month of the year, with Halloween bringing out all manner of horrors. For the boxers of the heavyweight and lightweight divisions, there will be extra reasons to fear this All Hallow’s Eve. Two former world champions will return to reassert themselves and begin the climb back to the thrones they once ruled from with iron fists. Former WBC heavyweight champion Deontay Wilder will meet Robert Helenius in his first fight since an all-time classic with Tyson Fury last October. Meanwhile, Vasiliy Lomachenko will box for the first time since December 2021 when he takes on lightweight contender Jamaine Ortiz.

Boxing loves a comeback. While we admire the “0” in Rocky Marciano’s 49-0 or Floyd Mayweather’s 50-0, the true fighting spirit of boxing is found elsewhere. It’s in Muhammad Ali or Evander Holyfield reclaiming the heavyweight throne after losing the gold. It’s about fighters like Glen Johnson or Frank Bruno putting heartbreaking losses behind them to reach the top. Wilder and Lomachenko’s journeys back are intriguing because these men were once invincible but are now mortal. A human is more relatable to the general public than a god. We now get to see how two of the most exciting fighters of the last decade react after being brought back down to Earth.

We have glimpsed into ‘The Matrix’ once since Lomachenko’s greatest defeat. The Ukrainian boxer followed up his shock defeat to Teofimo Lopez with a near-shutout win over Richard Commey last year. The victory at Madison Square Garden had looked set to hand ‘Loma’ a route back to his old unified lightwent title. The man who had defeated Lomachenko for those belts, Teofimo Lopez, had lost them to George Kambosos Jr in an upset of his own.

Lomachenko was supposed to travel to Australia and fight Kambosos in his own backyard, but the Russian invasion of Ukraine halted the plans. Like heavyweight monarch Oleksandr Usyk, Lomachenko put his fight career on hold to join the territorial defence force. WBC boss Devin Haney would travel in his place, unifying the championship with an enthralling twelve-round decision. Now, the 34-year-old cannot wait to reclaim what he sees as his rightful place on top of the 135lb division.

The man who stands between Lomachenko and a title shot against the winner of Haney’s undisputed title rematch with Kambosos is Jamaine Ortiz. The 26-year-old is no pushover, as former WBO super featherweight leader Jamel Herring found out last time out. ‘The Technician’ matches up well with Lomachenko, but his experience is levels beneath the former three-weight world champion. Look for ‘Hi-Tec’ to make a dangerous statement against his younger foe, setting up a dream fight with likely-champion Devin Haney.

Wilder’s return marks the first time we have seen him in a ring with someone other than Tyson Fury since 2019. ‘The Bronze Bomber’ is coming off back-to-back stoppage defeats to the apparently-retiring WBC champion. He’s been matched carefully in his comeback bout, though Robert Helenius is no soft touch. ‘The Nordic Nightmare’ is on a run of three stoppage wins, including twin-upsets over former prospect Adam Kownacki. The Pole was a crowd-pleasing heavyweight hope until he ran into the veteran, who splattered him in six and four rounds over the course of their two bouts. 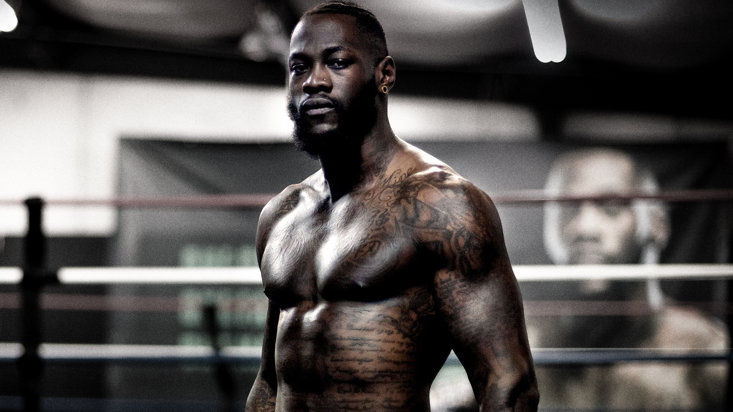 Deontay Wilder exists on another plane entirely though. Of the three men to have defeated Helenius, Wilder has shared the ring with two of them. He dealt with Gerald Washington in five rounds and stopped Johan Duhaupas in eleven. If Wilder is anything even approaching his best against Helenius, he will win comfortably and decisively.

The real question surrounds how close to his best he will be. Wilder has endured three brutal wars with Fury in the last four years. There have been other tough nights too. Bracing clashes with Luis Ortiz spring to mind. At the age of 36, Wilder is far from old for a heavyweight. But in terms of miles on the clock he has taken his fair share of punishment. Will the Helenius bout be the one where the levee breaks?

The chances are slim. Realistically, 38-year-old Helenius has had a rougher career than the former heavyweight champion. While Wilder has gone the distance just once, Helenius has been extended on multiple occasions. The Swede lacks the one-punch knockout power of Wilder, and we have seen how much punishment ‘The Bronze Bomber’ can take without giving in. The former champion's power and toughness should see him through this one.

October will be a pivotal month for two fighters who will be remembered for generations. Will everything they have given us in the past be the sum total of their contributions to the sport, or are there years of terrific achievement ahead of them? Those questions likely won’t be settled this Autumn, but both men will set out on the road to finding out the answers.

x
Suggested Searches:
The Sportsman
Manchester United
Liverpool
Manchester City
Premier League
More
boxing
Conor Benn: I’ve Not Committed Any Violations
Conor Benn’s O2 Arena superfight with Chris Eubank Jr on Saturday was thrown into disarray today [ ... ]
boxing
Eddie Hearn Reveals Lawyers Are Involved To Resurrect Benn vs...
Matchroom boxing managing director Eddie Hearn says negotiations are taking place between lawyers, teams [ ... ]
boxing
Clomifene: The Drug At The Heart Of The Conor Benn vs Chris...
Conor Benn’s O2 Arena superfight with Chris Eubank Jr has been thrown into disarray after a banned [ ... ]
boxing
Conor Benn Fails Drug Test Ahead Of Blockbuster Bout With Chris...
Conor Benn has failed a drugs test just days before his highly anticipated bout with Chris Eubank Jr. The [ ... ]
boxing
Deontay Wilder Believes Anthony Joshua Could Beat Tyson Fury
Deontay Wilder believes that Anthony Joshua could have beaten Tyson Fury if their proposed December [ ... ]
boxing
25 Years Ago: Andrew Golota's One-Round KO By Lennox Lewis Sums...
25 years ago today, Lennox Lewis blasted out Andrew Golota in a single round. ‘The Lion’ [ ... ]
boxing
Chris Eubank Jr Vs Conor Benn: The Weight, The Fathers And The...
The long-awaited return of Benn vs Eubank is nearly upon us. After their fathers captivated a nation [ ... ]
boxing
George Warren Says Anthony Joshua's Team Had 'No Ambition' In...
George Warren has revealed that the highly anticipated fight between Tyson Fury and Anthony Joshua fell [ ... ]
boxing
Chris Eubank Jr Vs Conor Benn: Everything You Need To Know
One of British boxing’s biggest rivalries will be reignited this weekend when Conor Benn and Chris [ ... ]
boxing
Welcome To Box-Tober: Boxing Puts Its Best Foot Forward This...
The nights are drawing in, the sun-drenched summer is behind us and the slow, inexorable march to morbid [ ... ]
boxing
Who Should Tyson Fury Fight Next?: The Sportsman Readers Have...
The Tyson Fury and Anthony Joshua saga has gone back and forth in the last few days. The Gypsy King [ ... ]
boxing
Invasion Of The Body Snatcher: Dillian Whyte On The Comeback...
Heavyweight contender Dillian Whyte has hooked up with legendary trainer Buddy McGirt in a bid to rebuild [ ... ]
boxing
Fury Vs Joshua: When Negotiations Robbed Us Of Dream Boxing...
Tyson Fury and Anthony Joshua have decided to see other people. Like any break-up, there are two sides [ ... ]
boxing
From Battlefields To The Boxing Ring: Meet 164-Fight Journeyman...
The alarm goes off at 5.30am on a typical Friday morning for one of British boxing’s most popular [ ... ]
boxing
45 Years Ago Today: Muhammad Ali Leaves It All In The Ring Against...
Muhammad Ali faced one of the toughest nights of his career on this day 45 years ago. ‘The Greatest’ [ ... ]
boxing
Nowhere Man: Where Does Anthony Joshua Go Next Without Tyson...
WBC champion Tyson Fury insists his proposed December bout with Anthony Joshua is now off. Despite negotiations [ ... ]
boxing
Anthony Joshua Out, Mahmoud Charr In: Has Tyson Fury Gone Too...
WBC champion Tyson Fury has revealed Anthony Joshua has missed the deadline for a potential fight with [ ... ]
boxing
Tyson Fury Confirms Anthony Joshua Fight Is OFF After Contract...
Tyson Fury has confirmed on his Instagram story that the planned meeting with fellow British heavyweight [ ... ]
boxing
Joe Joyce Is Ready For The World. Is The World Ready For Joe...
‘Juggernaut’ by name, ‘Juggernaut’ by nature. Joe Joyce ran down everyone in [ ... ]
boxing
Onto The Next One: Shakur Stevenson Says Goodbye To Super Featherweight
Shakur Stevenson said his farewells to super featherweight on Friday with a dominant unanimous decision [ ... ]
boxing
The KO Show: Joe Joyce Knocks Out Tough Joseph Parker In A Thriller
As the dust settled on Joe Joyce’s spectacular 11th round knockout victory over Joseph Parker, [ ... ]
boxing
Living Legend Amanda Serrano Defeats Sarah Mahfoud In Manchester
Living legend Amanda Serrano won a unanimous decision over Sarah Mahfoud at the Manchester Arena. ‘The [ ... ]
boxing
Joe Joyce Vs Joseph Parker: A Heavyweight Headliner Like No...
Joe Joyce and Joseph Parker’s Manchester throwdown on Saturday night is an unusual heavyweight [ ... ]
boxing
Shane Fury Exclusive: Tyson Would Beat Usyk And 'Made To Measure'...
Shane Fury, brother of WBC champion Tyson, has opened up on watching ‘The Gypsy King’ battle [ ... ]
boxing
Beyond Joyce-Parker: The Best Non-Heavyweight Boxing Fights...
Joe Joyce’s Manchester clash with Joseph Parker is a fight on the lips of every British boxing [ ... ]
boxing
Joe Joyce Vs Joseph Parker: Tale Of The Tape
Joe Joyce and Joseph Parker finally do battle this weekend at the Manchester Arena. Joyce has been in [ ... ]
boxing
Rocky And Larry: Marciano's 0 Will Never Go, But Holmes Came...
On this day in 1955, Rocky Marciano won the final fight of an unblemished professional boxing career. [ ... ]
boxing
Floyd Mayweather Confirms Exhibition Bout With KSI's Brother...
Floyd Mayweather has confirmed he is to fight YouTube star Deji Olatunji in a big-money exhibition in [ ... ]
boxing
Katie Taylor Puts Undisputed Title On The Line Against Karen...
Matchroom Boxing have announced an exciting card for October which will be headlined by undisputed lightweight [ ... ]
boxing
Floyd Mayweather Confirms That Conor McGregor Rematch Is Happening
Floyd Mayweather has confirmed that a rematch with Conor McGregor is in the works for 2023 and that [ ... ]