Football
News
Derby have lost their last five Championship matches and are hovering above the bottom three...
Simon Lillicrap
17:00, 26 Apr 2021

“We won’t be there (in the bottom three) at the end of the season. I’m confident in this group of players.”

Wayne Rooney was defiant on Boxing Day but now he has just two games to save Derby County from a humiliating relegation to League One. The Rams haven’t played in the third tier since 1986 and a thirteen year stint in the Championship could come to an end if the club lose their final two games.

They currently sit outside the relegation zone, four points clear of both Rotherham and Sheffield Wednesday, but the Millers still boast two games in hand and Wednesday visit Pride Park on the final day. It’s crunch time for Rooney’s side and they are in the midst of their worst form of the entire season.

Despite taking the lead, Saturday’s 2-1 home defeat by former relegation rivals Birmingham City condemned Derby to their fifth consecutive defeat. That result made the Blues safe and kept the Rams mired in misery on the edge of the relegation zone. They just can’t break clear of the bottom three and it is perhaps more through luck than judgement they don’t occupy one of those spaces already.

Sheffield Wednesday were deducted six points at the start of the season which has hampered their survival efforts while Rotherham had to play four games in eight days as they attempted to make up the games that were postponed due to a coronavirus outbreak in their camp. A win in one of their two remaining games in hand would turn the pressure up further on this shaky Derby side.

“The position we’re in isn’t great,” Rooney conceded. “There’s no getting away from that but we can still do something about it.”

They can still do something about it, but mathematically, it is no longer in their hands. If Huddersfield pick up another win and Rotherham, who are in awful form too having lost their last four, do the unthinkable and win their final four matches, Derby will be relegated no matter what they do on the pitch. Six points seemed an achievable goal with seven games left to play, but given their awful recent results, that same points target now remains for the Rams with just two to play. 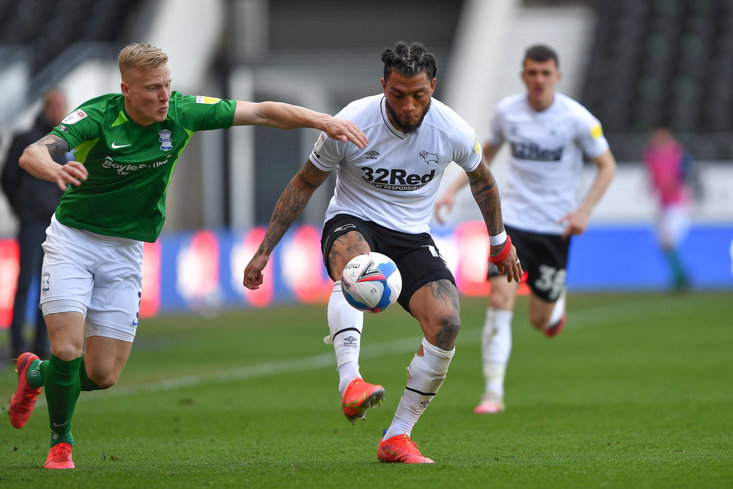 “I know the players are fighting. They’re working to get out of the mess we’re in,” said Rooney. “The belief is there. But if you’re in a bad run of form your confidence dips. That’s normal. I’ve had it as a player. It’s important that the players recognise the position we’re in. I’m sure they all do.”

It is worth noting that when Rooney took on the job in November 2020, Derby were bottom of the Championship having amassed just six points and scored five goals under Phillipe Cocu, the experienced boss who had led them to a tenth place finish in the previous campaign. However, with a side who had reached the play-offs in four of the six seasons prior to that, this was a sign of regression, which continued in the summer transfer window.

Max Lowe and Jadon Bogle both departed for Sheffield United and Chris Martin joined Bristol City on a free having scored eleven in the previous campaign as the Rams took risks on unreliable players like Jordon Ibe and Patrick Roberts. It was a move that blew up in Cocu’s face and Rooney was promoted from player-coach to first-team manager in an attempt to help unify a disgruntled and underperforming squad.

He has preferred a rigid 3-5-2 system but it is clear as day where the glaring issue lies with this Derby side: GOALS. A severe lack of them. Somehow they have scored just 32 in their 44 games, the lowest in the division as even basement club Wycombe Wanderers have hit the net three more times than the Rams. The fact that 34-year-old former Turkish international Colin Kazim-Richards was picked up on a free in October having most recently played for Pachuca in Mexico is telling. The fact he is by far their top scorer with eight goals (five more than anyone else) - even more so.

Not since the Premier League season that ended with one win and eleven points have Derby fans felt so disgruntled and even if they do avoid the drop this season, Rooney will not have ‘saved’ them as Lee Bowyer has done with Birmingham. Rooney walked into a mess at Derby. A club in turmoil. It was never going to provide the stable footing Frank Lampard enjoyed three years ago to make his managerial bow, but instead a true test of Rooney’s desire to be a manager.

In trying circumstances, the Manchester United legend has marginally improved a Derby side who were lamented earlier in the season under Phillipe Cocu, but it may not be enough. There was a brief revival in the winter, but the months that have followed have been nothing but miserable. Derby need to wake up to avoid relegation and they have just two games to do so. Leading Derby Country to League One will be a brutal start to life in the dugout for England’s greatest ever goalscorer.