Wayne Rooney’s Monday Night Football appearance was as dazzling as his playing career. One of the greatest footballers this country has ever produced is somehow still underrated when you look at all he achieved as a player. He won countless titles, put in an unforgettable performance for England at Euro 2004 as an 18-year-old, and of course is still the Three Lions’ top goalscorer in history. A complete joy to watch.

Over the last 18 months, the Liverpool-born legend has built his reputation away from the pitch in his first managerial role at Derby County. When he took over at Pride Park, many people were sceptical about his appointment due to his inexperience but this year he has proven them wrong as he has done an incredible job in the most difficult circumstances. He’s had to deal with a thin squad filled with young players, a 21 point deduction and the ongoing uncertainty of the club’s future with the financial turmoil off the field.

Regardless of what division Derby end up in for 2022-23, with hope that they still exist as one of the 12 founders of the Football League, Rooney deserves unrelenting praise for his work there. It won’t be long until he becomes one of the most sought-after managers in England. His efforts at Derby during a bleak period for the club that any manager would struggle with, have been nothing short of sensational.

So when the Rams boss was announced to be Sky Sports’ guest pundit for Monday Night Football for Crystal Palace vs Arsenal, many were excited to hear the former Manchester United attacker’s thoughts about the situation at Old Trafford and his view of the game in general.

A player who was so often ostracised for his stupidity during interviews has clearly matured in his time as a manager. And his footballing intelligence is unquestionable. After this measured performance, it is fair to say that Rooney knows exactly what he is talking about.

Andy Mitten
@AndyMitten
Wayne Rooney really worth listening to. Decent insight and a long way from the 'but, erm' days. Clearly has something as a manager and that's where he sees his future. Be fascinating to see how his management career goes.
172
6660

When he made his case for why Paris Saint-Germain boss Mauricio Pochettino should be the next Red Devils manager ahead of Ajax’s Erik ten Hag, you found it difficult to disagree with him because he made such a well-structured argument in favour of the former Tottenham Hotspur man.

Speaking on Monday Night Football, Rooney said: “I think Pochettino has done it in the Premier League. He knows the Premier League and at Tottenham he brought a lot of players through. He did it at Southampton as well.

“If I’m choosing from one of the two, that’s who I’d choose. He would need to be given time to place his blueprint on the club and on the team. If you give him time, I think he’d do well.”

As Rooney was pushed further about how the club he spent 13 years at can start to initiate the change that is needed, the 36-year-old highlighted that there will need to be an overhaul and some of the big names will need to be moved on. The two stars he mentioned were Paul Pogba and Cristiano Ronaldo, who he both played alongside at different times during his Old Trafford career.

Pogba rejoined the club from Juventus in 2016 in a club-record deal and the expectation for the Frenchman could not be grounded, but after almost six years into his return he hasn’t quite hit the heights at Manchester United and Rooney feels like it is time for both parties to go their separate ways.

“I think it’s got to a point where it’s probably better for him to move on. If Paul is honest with himself, he probably hasn’t had the impact he’d have liked since he returned to Manchester United,” he said.

“I watch him for France and he is a completely different player. The ability, the vision and control of the game is always there for France. It hasn’t quite worked at United for him, and there’s a few players they need to let go of.

“There hasn’t been a settled manager there since Sir Alex Ferguson so I think whoever comes in, they need to give them time to build relationships with players.

When discussing why United should let Ronaldo go, Rooney felt that while the Portuguese star had scored some important goals this season, the club desperately needs to look to the future in hungry, younger players to lift the club in the next few years.

"Cristiano is getting on a bit and he's certainly not the player he was when he was in his 20s and that happens. He's a goal threat but I think during the rest of the game, they need more,” said Rooney. 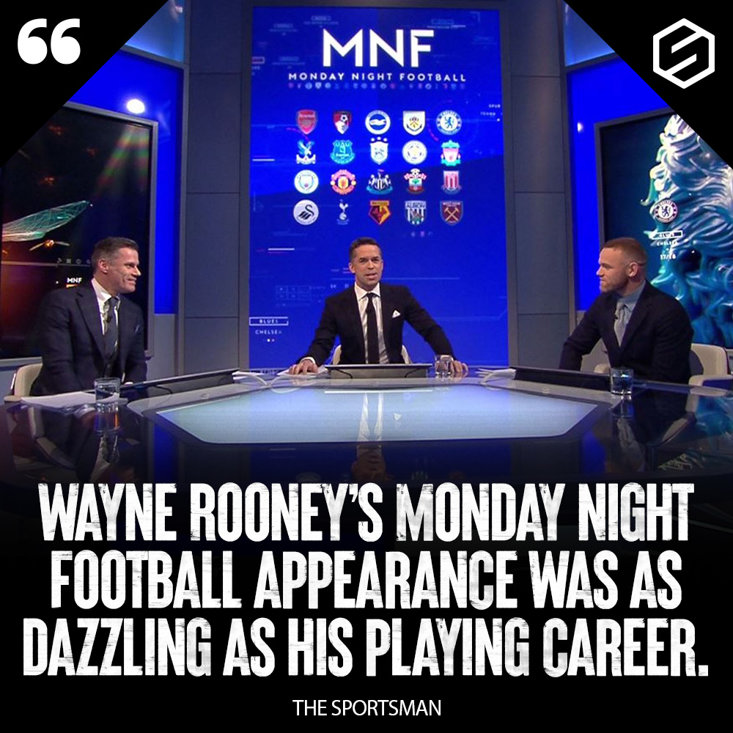 The Derby boss spoke eloquently and rationally about the ongoing issues about Manchester United, and even with his deep ties with the club he was not afraid to say exactly what he was thinking, which many supporters feel other ex-United pundits tend to do on television.

His Monday Night Football debut was insightful, interesting and it was educational, particularly when he was analysing Harry Kane’s performance as a number 10 against Newcastle United. As a striker who also dropped deep, his insight was valuable but Rooney was also able to explain the evolution of the role in the modern game and the effect it has on the role of sides with wingers and wing-backs.

Rooney’s answers were a breath of fresh air and there will be a lot of people that will hope it isn’t too long before he appears in the Sky Sports studio again. His knowledge is exceptional and his supporting points were well-founded. Viewers were able to see first-hand, just how he has been able to keep Derby fighting against all the odds this year and why he is establishing himself as one of the hottest managerial prospects in this country. It was excellent Monday night viewing.