Boxing
News
After being knocked out by Tyson Fury, what does the future hold for Dillian Whyte?
Joey Mills
14:00, 25 Apr 2022

After years of court battles, of being avoided and of overcoming setbacks; Dillian Whyte lost his WBC title challenge. Tyson Fury furthered his claim as a generational heavyweight talent by knocking out ‘The Body Snatcher’ with an absolute peach of an uppercut in the sixth round. While the world ruminates on Fury’s promise to retire, very few are talking about where Whyte goes next. It is the nature of modern sport to fete the winners and ignore the losers. But Brixton’s ‘Villain’ still has a lot to offer. Here are some options Whyte should consider for his next move.

Ruiz Jr’s proposed fight with ex-kickboxer Tyrone Spong appears to have fallen through due to the existence of a signed contract for a fight with ‘King Kong’. A fight between Whyte and the winner of this collision would be a box office occasion.

Former unified champion Ruiz would provide a stern test, outsizing Whyte and possessing more in the way of technical boxing nous. ‘The Body Snatcher’ would have to show a vast improvement in his head movement and defence to find a way past the Mexican. Ortiz would be preferable, providing a stationary target. The big Cuban has been knocked out before, but also boasts some firepower of his own. This potential bout has ‘war’ written all over it.

Frank Warren confirmed that Joyce and Parker will meet, and while his assertion it will be a stadium fight seemed overly-ambitious, this still represents a world class heavyweight dust-up. Whyte has beaten former WBO champion Parker before, in a 2018 thriller. A return engagement with the New Zealander would probably be his best bet here.

Joyce presents a lot of the same problems Fury did. He lacks the explosive power Sugarhill Steward seems to have added to the WBC champion’s game, but Joyce fights with the same awkward, debilitating style as Fury. Whyte would perhaps find it a little easier to get close to the unbeaten silver medalist, and that pressure would be key for a positive result. 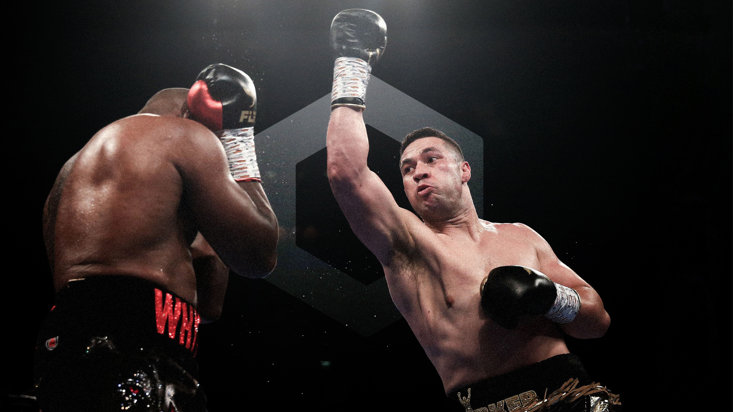 could we see Joseph Parker and Dillian Whyte meet again?

The nuclear option, this bout is a “out of the frying pan and into the fire” situation. This rematch for the WBA, IBF and WBO heavyweight belts would give Whyte a second bite of the cherry.

A fighter going straight back in for another title shot is not unheard of. Andrew Golota fought for the IBF, WBA and WBO belts in three consecutive fights across 2004 and 2005. While Whyte being given an immediate title shot seems unlikely, there is justification. A rematch between Whyte and Joshua would sell a lot of tickets after their 2015 thriller. Usyk might also view Whyte as a sensible second title defence should he beat ‘AJ’. The Ukrainian’s movement, sharp combinations and ring smarts would mesh well with Whyte’s size, strength and pressure-fighting style.

The sole option on this rundown without a date in the diary, ‘Dynamite’ is expected to meet WBA ‘regular’ champion Trevor Bryan in the coming months. While that bout would potentially net the 24-year-old a belt, it is not a title anyone takes seriously given Usyk’s status as the WBA ‘super’ champion. A fight with Whyte would garner far more interest at this stage.

The intrigue here would be the clash of generations. Dubois is the younger man by a decade, and may view Whyte as an attractive scalp to establish his reputation. For Whyte, a victory over the young lion might be just what he needs to rebuild after a damaging loss. If Dillian spends some time away, he could even wait on Dubois fighting Bryan and potentially nab himself a version of the WBA belt along the way. It’s a fight that carries benefits for all involved.