WBO welterweight champion Terence Crawford returns to the ring next weekend, in a top-drawer match-up with former two-time world champion Shawn Porter. The Sportsman caught up with a focused Crawford ahead of the big fight to cover a number of issues. Read on to hear ‘Bud’ give his take on the challenge ahead, the rise of Canelo and a potential fight with one of Britain’s best.

Shawn Porter is a former champion, and has been a great fighter for a number of years now. Is this a fight you have been targeting for a long time?

You’ll have been out of the ring for just over a year on fight night. What made you take such a big fight after twelve months out?

Why not? He's been out of the ring longer than me. I believe he fought before me. But it doesn’t matter. You know, I'm going to be ready, be sharp. I stay in the gym, I don't worry about things like that.

Have you been watching a lot of film on Porter in preparation or do you prefer to concentrate on your own gameplan?

The pandemic robbed us of big boxing occasions like this fight. How did you cope with the COVID-19 pandemic? 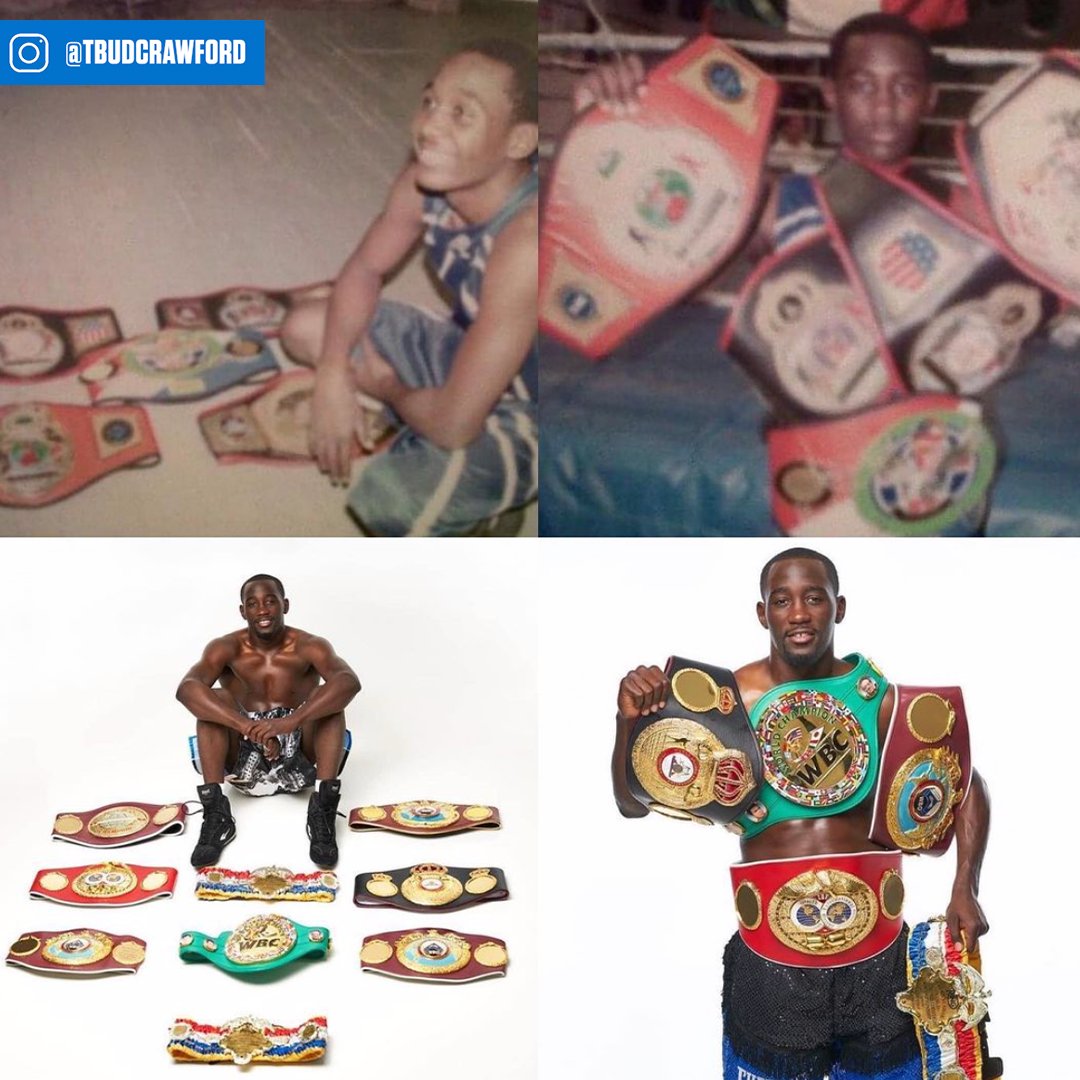 You went undisputed at 140 pounds before moving up to welterweight. There’s been a lot of talk about Saul ‘Canelo” Alvarez unifying the four super middleweight belts. Any designs on going undisputed at welterweight?

Of course, that's always the plan. But we’ve got to take it one step at a time. Right now we’ve got somebody in front of me that's trying to block everything that I'm trying to accomplish. That’s Shawn Porter, so we’ve got to get him out the way first.

Did you watch Canelo’s fight against Caleb Plant?

It was a great fight. Canelo showed why he is one of the best fighters in the world. The way he broke down Caleb Plant, it was beautiful.

You said “one of the best fighters in the world” there. Do you view yourself as the current pound-for-pound number one?

Manny Pacquiao lost to Yordenis Ugas in his last fight. There were a lot of rumours that, had he won, he wanted to fight you. Was that ever a real possibility?

Well that fight was basically signed on Pacquiao's behalf. It wasn't signed on my behalf, because the numbers and whatnot weren't right. So that fight then turned into a reality. Yeah, it wasn't meant to be. Things happen for a reason. For whatever reason, that fight didn't happen.

Yeah, Josh Taylor’s a great, talented fighter. Maybe in the future that fight will come to fruition and we’ll share the ring together.

Finally, do you have a message for Shawn Porter ahead of your fight?

Terence Crawford's blockbuster battle with Shawn Porter for the WBO welterweight championship is live on Sky Sports on November 20.

Terence Crawford is 10/11 to beat Shawn Porter on points with Betfred
x
Suggested Searches:
Manchester United
Liverpool
Manchester City
Marcus Rashford
Premier League
More
boxing
Teofimo Lopez vs George Kambosos Jr Could Join The Great Lightweight...
Teofimo Lopez and George Kambosos Jr finally step into the ring on Saturday in a blockbuster lightweight [ ... ]
boxing
Joe Joyce In Talks To Face Pulev: Five Boxing Stories You Might...
Joe Joyce is set for a heavyweight showdown with a division veteran, Amir Khan versus Kell Brook is, [ ... ]
boxing
Rocky Fielding, Ohara Davies And Badou Jack Take To The Ring...
Super lightweight standout Ohara Davies returns to the ring on Friday in Dubai. He was originally scheduled [ ... ]
boxing
On This Day: Roberto Duran And The Unthinkable 'No Mas' Against...
Roberto Duran had hands of stone. He had won 71 of 72 fights in a blistering career. He had reigned [ ... ]
boxing
Joe Joyce Wants To Face Tyson Fury, But Dillian Whyte Won’t...
Joe Joyce has thrown his hat into the ring for a possible world heavyweight title clash with Tyson Fury. [ ... ]
boxing
The Top 10 British Heavyweights Of The Modern Era
British boxers have taken over the heavyweight division in recent years. WBC and lineal champion Tyson [ ... ]
boxing
After The Porter Slaughter, Terence Crawford MUST Fight Errol...
People told Terence Crawford that his record needed a world class welterweight in their prime, so he [ ... ]
boxing
Everything You Need To Know About Teofimo Lopez vs George Kambosos...
It has been a long, bizarre road but Teofimo Lopez will finally step in the ring with George Kambosos [ ... ]
boxing
Mike Tyson’s Destruction Of Trevor Berbick Is Still Stunning...
On this day 35 years ago, Mike Tyson became the youngest world heavyweight champion in history. He was [ ... ]
boxing
Everything You Need To Know About Demetrius Andrade Vs Jason...
Demetrius Andrade, perhaps the most avoided man in boxing, returns to the ring tonight. ‘Boo Boo’ [ ... ]
boxing
Terence Crawford vs Shawn Porter Is A Match Made In Heaven
Modern boxing is often criticised for providing fights that aren’t competitive on paper, mismatching [ ... ]
boxing
Is Canelo Cruising For A Bruising? Saul Alvarez Targets WBC...
In the wake of Saul ‘Canelo’ Alvarez beating Caleb Plant to become undisputed super middleweight [ ... ]
boxing
‘If You Can’t Kill Me, Then Forget It’: Richard Commey Is Ready...
Former IBF lightweight champion Richard Commey is in a confident mood as he prepares to face pound-for-pound [ ... ]
boxing
Everything You Need To Know As Riakporhe Headlines Weekend’s...
This weekend sees Richard Riakporhe headline a fascinating night of action on BOXXER’s Sky [ ... ]
boxing
Triller Announces Triad Combat: Triangular Rings, Hybrid Rules...
Triller have announced Triad Combat, a “revolutionary, combat team sport” that incorporates [ ... ]
boxing
Everything You Need To Know Ahead Of Terence Crawford Vs Shawn...
This weekend sees one of boxing’s pound-for-pound best fighters make his long-awaited return to [ ... ]
boxing
Remembering The Fight When Muhammad Ali Proved He Was Undeniably...
“The greatest Ali ever was as a fighter, was against Williams - that night, he was the most devastating [ ... ]
boxing
Ki-KO: Kid Galahad Stunned By Super Spaniard Martinez In IBF...
The dream has come true for Kiko Martinez. The Spanish veteran had been written off by critics, and [ ... ]
boxing
Heartbreak For Terri Harper As Alycia Baumgardner Dethrones...
Terri Harper was sensationally stopped in the fourth round by Alycia Baumgardner, losing the WBC super [ ... ]
boxing
On This Day: Holyfield And Bowe Kick Off The Greatest Heavyweight...
On this day in 1992, the greatest heavyweight trilogy of all-time kicked off. With all due respect to [ ... ]
boxing
Eubank Jr vs Williams Set For December: Five Boxing Stories...
There’s been some rumblings of a brand new Fight Night game heading our way, we've got an [ ... ]
boxing
Liam Williams Says He Would Maul Chris Eubank Jr If They Met...
An all-British middleweight showdown between Chris Eubank Jr and Liam Williams looks imminent, with [ ... ]
boxing
On This Day: Usyk Knocks Out Bellew In Britain’s First Glimpse...
Oleksandr Usyk’s dominant September WBA, IBF and WBO heavyweight title win over Anthony Joshua [ ... ]
boxing
Angry Anthony Joshua Wants To “Bash Usyk Up” In Rematch Says...
Eddie Hearn has given an update on Anthony Joshua’s hunt for a new trainer ahead of the Brit’s [ ... ]
boxing
Everything You Need To Know Ahead Of Kid Galahad Vs Kiko Martinez
Kid Galahad makes the first defence of his IBF featherweight strap this weekend when he takes on veteran [ ... ]
boxing
On This Day: 25-1 Underdog Evander Holyfield Shatters The Mike...
On this day in 1996, Mike Tyson did what he always did. The commentators read off a list of his quickest [ ... ]
boxing
What Will Canelo Do Next? Saul Alvarez Has A Wealth Of Options
“And when Alexander saw the breadth of his domain, he wept, for there were no more worlds to conquer” [ ... ]
boxing
On This Day: Joe Calzaghe Takes Well-Deserved Victory Lap Against...
On this day, we saw Joe Calzaghe take to the ring for the last time. Boxing is a cruel, unforgiving [ ... ]
boxing
So You Think You Know Canelo? Take Our Undisputed Saul Alvarez...
Saul 'Canelo' Alvarez takes on Caleb 'Sweethands' Plant on Saturday night, in a fight [ ... ]
boxing
Prelude To History: The Canelo-Plant Undercard Carries Intrigue
The undisputed super middleweight title battle between Saul ‘Canelo’ Alvarez and Caleb ‘Sweethands’ [ ... ]