Football
News
The time has come for Southgate to prove he'll pick form over reputation between the sticks
Simon Lillicrap
17:00, 16 Feb 2020

England appear to be learning from their past mistakes. The promotion of Gareth Southgate from under-21 manager to the senior team has revolutionised the way the team play and results on the pitch have improved as a result. However, ten years on from the horror show that was the World Cup in 2010, the Three Lions are on the brink of repeating a potentially fatal error.

Heading into that tournament, Fabio Capello had many issues. An ageing squad, players forced to play out of position and most strikingly, he didn’t know who his best goalkeeper was. He took three options to the tournament. Robert Green, David James and Joe Hart.

At this time, Green was at West Ham, James was 39-years-old and Hart had just three international caps to his name at the age of 23. He was also playing for the unfashionable Birmingham City at the time which did nothing to help his case for a starting spot. The Three Lions, however, were certainly not spoilt for choice in between the sticks.

In the three warm-up games England played in the build-up to the World Cup, all three keepers were tested, but not trusted. Green played 135 minutes, Hart 90 and James just 45 as the Italian manager failed to determine who was his preferred goalkeeper. This chopping and changing meant that no rapport or stability could be formed between the ‘keeper and his back four, leading to a disaster of a World Cup.

Robert Green made the howler to end all howlers in the opening game against the United States and Capello dropped him for the rest of the tournament, instead turning to the experienced David James. England limped out in the last 16 after a 4-1 hammering by Germany. 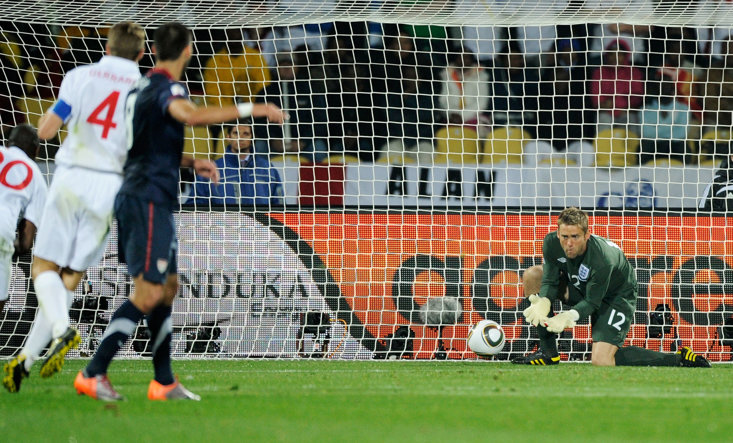 In 2010, Joe Hart was by far England’s most in-form and talented goalkeeper. He was ignored due to a lack of experience and not playing for one of the big clubs. On his appointment as England’s permanent manager, Gareth Southgate proudly stated: "I never pick on reputation - form has to come into it.”

This is the time to prove it. Much has been made of Jordan Pickford’s poor form in the Premier League this season and although he has credit in the bank with Southgate due to his past performances for the national side, the simple fact of the matter is that he is no longer England’s in-form goalkeeper.

That title falls to Sheffield United’s Dean Henderson. The Blades shot-stopper has been in sensational form this season and Chris Wilder’s men have the second-best defence in the top flight, only the unbeaten Liverpool have conceded fewer goals.

Henderson has saved 76% of the shots he has faced compared to 61% for the Everton keeper. He has kept nine clean sheets to Pickford’s six and conceded just 0.84 goals per game compared to 1.46 for England’s current number one.

At just 22-years-old he is yet to make his debut for the Three Lions, despite having eleven caps for the under 21 side. He is inexperienced on the international stage, but the warm-up games for Euro 2020 provide the perfect opportunity to give him his debut and allow him to build a rapport with his defence.

If the current form continues for both goalkeepers, Southgate must learn from the past. In 2010, England’s best goalkeeper was left watching from the bench as the two more experienced goalkeepers ahead of him underperformed.

Ten years on, the same mistake must not be repeated.