It’s been a belting weekend of boxing. Over in San Antonio we were treated to a triple-header of world title fights, including another impressive performance from hometown hero Jesse Rodriguez. On this side of the pond, it was Adam Azim who stole the show in the far cooler climes of Coventry. Here’s what you might have missed.

Jesse Rodriguez cemented his place as one of boxing’s very best up and coming fighters on Saturday night, stopping Srisaket Sor Rungvisai in eight rounds at the Tech Port Arena.

The WBC super-flyweight champion has had a blockbuster year so far and looks more and more impressive with each outing. Not only is it the method in which he’s winning that is garnering plaudits, but it’s who he’s been doing it against.

In February, the 22-year-old outclassed former world titlist Carlos Cuadras to pick up the vacant title, becoming boxing’s youngest current world champion in the process. Last night, he put the cherry on the cake, dominating Rungvisai - a two-time world champion and shoo-in future Hall of Famer - from start to finish.

Working behind a terrific jab and displaying excellent ring generalship to keep the tough Thai veteran at a distance, Rodriguez never really looked like he was in any kind of trouble. The American scored a knockdown over Rungvisai in the seventh, although, having seen the replays, an argument could be made that it was a slip. However, the fight came to an end a round later after some unanswered heavy pressure from Rodriguez forced the referee to call a halt to the bout at 1:50.

“After the third round, I felt like his power wasn’t the same. He was still strong, but not like the first two rounds,” Rodriguez said in the aftermath. “Coming into the fight, I said I couldn’t stand in there like I did with Cuadras, and we came out tonight and put on a show.” 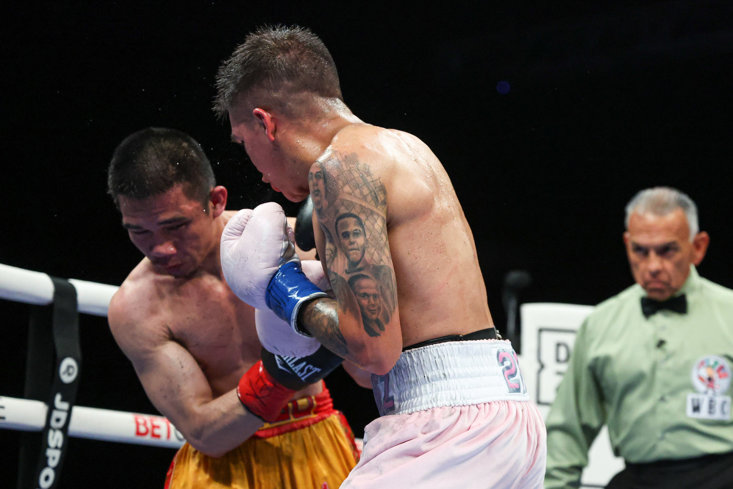 Elsewhere on a bumper night of world title fights in the Lone Star state, unified WBA and IBF super bantamweight king Murodjon Akhmadaliev had to overcome a hand injury to put away Ronny Rios with just 54 seconds of the fight remaining.

Jessica McCaskill’s defence of her undisputed welterweight titles ended in unusual fashion as opponent Alma Ibarra quit in her corner after three rounds. The Mexican had apparently taken umbrage with what she claimed was persistent holding from the champion and a translator heard her tell her team that she simply wanted to go home.

“I thought it was gonna be a crazy firefight, Mexican against Mexican, we were ready to go head-to-head and put on a show for the fans, we love fighting,” McCaskill said after the bout. “I just had too much power, too many angles, too much pressure. I was the more come-forward fighter.”

Over 4,900 miles away from Texas, Coventry put on its own night of top-quality action in the ring courtesy of Boxxer.

The star of the show at the Skydome Arena was without question Adam Azim. The Assassin lived up to his name, swiftly dispatching Anthony Loffet in just 66 seconds to claim the WBC Youth Inter-Continental super-lightweight title in his first scheduled 10-rounder.

A vicious left uppercut buzzed the Belgian and two subsequent right hooks put him to the deck inside the first 30 seconds. Loffet bravely rose, though uneasily, and after another intense flurry from Azim had him in trouble again, the towel was thrown in.

"This is the first of many," the 20-year-old told Sky Sports afterwards. "If anyone gives me the first shot and I land it straight away, you're getting hurt straight away.

"I want so many other titles, I'm going to grab them with both hands."

"[I was] more nervous for the ring walk to be honest, but once that first bell goes it's what I live for day in day out, so I'm used to it," Artingstall said after her win.