The nights are drawing in, the sun-drenched summer is behind us and the slow, inexorable march to morbid John Lewis adverts has begun. There isn’t much to be cheerful about during the seasonal hinterland of autumn’s transition into a bitter winter. But one thing that fans of the squared circle can anticipate is some truly incredible fights.

October is ludicrously stacked this year, with huge names at home and abroad all preparing to engage in gloved combat. Here are The Sportsman’s magnificent seven of fights you can’t afford to miss this month.

This bout needs no introduction. This is a continuation of perhaps the greatest rivalry ever fought on British soil. Chris Eubank and Nigel Benn waged two unforgettable wars in the 1990s. Now it is the turn of their sons to rekindle the old flame at the O2 Arena in London. The catchweight limit of 157lbs is a talking point considering Eubank Jr has spent his career at middleweight or higher while Benn has never scaled above welterweight.

This rescheduled superfight looks set to be worth the wait, as the undisputed middleweight championship is decided in this battle of the unbeatens. Shields has conquered all comers to become a three-weight world champion. But she has never met a challenger with the knockout power of Marshall, who has not been taken the distance in four years. ‘The Silent Assassin’ inflicted Shields’ only defeat as an amateur, can she do it again in the pro ranks?

The return of the ‘Bronze Bomber’ is full of questions. The knockout artist has not boxed since his dramatic November 2021 loss to Tyson Fury. Furthermore, Wilder has not face an opponent that was not Tyson Fury since November 2019. Helenius is on a fine run of form, having won a pair of fights against former prospect Adam Kownacki. Expect fireworks while this one lasts.

This undisputed lightweight title rematch sees champion Haney attempt to recreate his impressive decision win over the Aussie. Once again he heads Down Under to do it. The odds are stacked against Kambosos, but we’ve said that about ‘Ferocious’ before. Kambosos broke through with a stunning upset win over Teofimo Lopez in 2021. He’ll need a similar performance to trouble the impressive Haney. 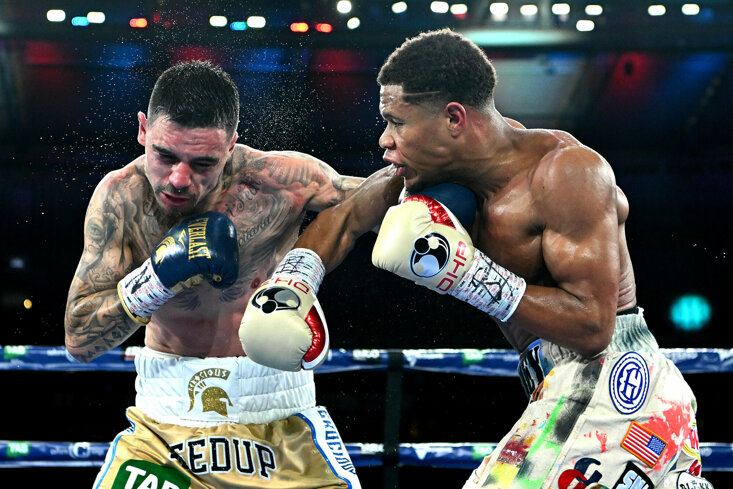 ‘The Matrix’ reloads against unbeaten prospect Ortiz in an exciting lightweight clash. Lomachenko is set to meet the Haney/Kambosos victor if he gets past Ortiz, as he looks to plot a path back to the top of the 135lb division. Ortiz impressed beating former world champion Jamel Herring last time out, but ‘Loma’ is not built like most men. If Ortiz goes the distance he’ll emerge with credit. If he wins he’ll go down in history.

We’re as surprised as anyone to find Jake Paul on a list of highly anticipated boxing matches. But credit where it’s due, this bout with ‘The Spider’ is a step-up. Paul exclusively feasts on YouTubers or athletes from other sports and specialises in beating washed-up ex-UFC fighters. On the surface, 47-year-old former UFC middleweight king Silva fits the bill. But unlike Tyron Woodley and Ben Askren, Silva is an elite striker. He also holds a boxing win over former world champion Julio Cesar Chavez Jr. No doubt about it, this is Jake’s toughest test thus far.

‘The Bray Bomber’ returns off the back of her Fight of the Year victory over Amanda Serrano. She defends her undisputed lightweight championship against unbeaten Karen Elizabteh Carabajal. The challenger has never fought outside her native Argentina and could not have picked a tougher fight for her debut abroad. With a Serrano rematch and a possible Croker Park date in her future, Taylor can’t afford to slip up here.

x
Suggested Searches:
The Sportsman
Manchester United
Liverpool
Manchester City
Premier League
More
boxing
Gorman Vs Wardley Is A Throwback Fight Worthy Of The British...
On Saturday night, Fabio Wardley and Nathan Gorman will honour one of the great British boxing traditions. [ ... ]
boxing
Five Blows From The Body Snatcher: Dillian Whyte's Greatest...
Dillian Whyte will be looking to bounce back to winning ways this weekend when he takes on undefeated [ ... ]
boxing
Carl Froch Vs George Groves And Boxing's Great British Grudge...
Nine years ago today, Carl Froch and George Groves collided at the Manchester Arena, waging the first [ ... ]
boxing
Dalton Smith: 'Get A Couple Of Million And I'll Smack A YouTuber!'
Dalton Smith is a star on the rise. The Sheffield super lightweight has just made the first defence [ ... ]
boxing
Zach Parker Vs John Ryder: Everything You Need To Know
The WBO interim super-middleweight title is on the line at the O2 Arena this weekend in a fascinating [ ... ]
boxing
Dillian Whyte Vs Jermaine Franklin: Everything You Need To Know...
Heavyweight contender Dillian Whyte will be looking to bounce back to winning ways this weekend when [ ... ]
boxing
Gervonta 'Tank' Davis And Ryan Garcia Agree To Mouthwatering...
WBA ‘regular’ lightweight champion Gervonta Davis has agreed a fight with unbeaten contender [ ... ]
boxing
The Weekend Boxing Preview: European Titles, Unbeaten Superstars...
After a star-studded weekend where old stagers Ricky Hatton and Floyd Mayweather took part in exhibitions, [ ... ]
boxing
Martin Scorsese At 80: Celebrating Raging Bull, The Iconic 'Anti-Rocky'
“And though I'm no Olivier, if he fought Sugar Ray he would say that the thing ain't the [ ... ]
boxing
Why Dmitry Bivol Should Make 'Canelo' Come Back To 175 Pounds...
Saul ‘Canelo’ Alvarez has targeted a May return to the ring, after having surgery on his [ ... ]
boxing
Fury-Wilder 4 And Usyk-Hrgovic: The Heavyweight Fights Nobody...
Ask any boxing fan which heavyweight fight they would cherish above all others and you’d get the [ ... ]
boxing
The Panel: Should Women's Boxing Move To Three-Minute Rounds?
Welcome to The Panel, where we speak to a group of star names from across the fight game about the big [ ... ]
boxing
A Tale Of Two Exhibitions: Ricky Hatton And Floyd Mayweather...
On 8th December 2007, Floyd Mayweather defeated Ricky Hatton in Las Vegas, with the WBC and The Ring [ ... ]
boxing
Tommy Fury vs Paul Bamba Cancelled: Is Fury Unprofessional,...
Tommy Fury’s stock has never been lower. This weekend, when due to fight Paul Bamba, he weighed [ ... ]
boxing
Redemption Day: Natasha Jonas Clinches The Treble Against Marie-Eve...
A year ago, Natasha Jonas’ two most recent fights were a pair of failed attempts to win world [ ... ]
boxing
Chasing Gold: Conner Tudsbury Determined To Become A Mancunian...
There was something of a media circus the day Moss Side Fire Station Boxing Club opened its doors in [ ... ]
boxing
Haney-Lomachenko, Stevenson-Cruz And More Ordered At WBC Convention
The World Boxing Council hosted their 60th annual convention, in which they laid out plans and policy [ ... ]
boxing
'You Want Homer To Fight Tatum?!': 26 Years Of 'The Homer They...
It was a heavyweight title fight like no other. Watched by 9.7 million viewers on its initial airing [ ... ]
boxing
Back From The Brink: Natasha Jonas Has Gone From Nearly Girl...
A year ago, Natasha Jonas had failed to win her last two bouts. The decorated amateur had seemed nailed [ ... ]
boxing
This Is Hitman Heritage: The Very Best Of Ricky 'The Hitman'...
Ricky Hatton returns to the ring this Saturday in an exhibition bout against legendary three-weight [ ... ]
boxing
Ricky Hatton vs Marco Antonio Barrera: Everything You Need To...
British boxing legend Ricky Hatton returns to the ring this weekend for the first time in nearly a decade [ ... ]
boxing
Ricky Hatton On Fighting Barrera, Hitting Campbell With Body...
British boxing legend Ricky Hatton returns to the ring this weekend for the first time in a decade when [ ... ]
boxing
Sunny Edwards Vs Felix Alvarado: Everything You Need To Know...
Flyweight world champion Sunny Edwards defends his IBF title on Friday in Sheffield when he collides [ ... ]
boxing
Logan Paul's WWE Career Is The Perfect Antidote To Jake's Boxing...
Logan Paul woke up on Sunday morning with a torn meniscus, torn MCL and a potentially torn ACL. The [ ... ]
boxing
Floyd Mayweather Vs Deji: Everything You Need To Know
Floyd Mayweather’s post retirement exhibition tour continues this weekend and this time it is [ ... ]
boxing
'Canelo' Rematch Or Undisputed Glory? What Next For Dmitry Bivol?
WBA light heavyweight champion Dmitry Bivol was superb on Saturday night, elegantly out-boxing previously-unbeaten [ ... ]
boxing
Like Father, Like Son: The Mixed Fortunes Of Boxing's Paternal...
Campbell Hatton returns to the ring this Saturday in Abu Dhabi. The 21-year-old will face 9-5 Denis [ ... ]
boxing
Jamie Moore On Taylor-Catterall: ''What Happened Last Time Can't...
Boxing trainer and former European super welterweight champion Jamie Moore is in for a busy few months. [ ... ]
boxing
Josh Taylor And Jack Catterall Rematch Looks Set For Glasgow...
Reports have emerged suggesting the long-awaited rematch between WBO super lightweight champion Josh [ ... ]
boxing
Houston, We Have A Problem Child: What Next For YouTube Boxer...
Jake Paul defeated UFC icon Anderson Silva by unanimous decision on Saturday, knocking down ‘The [ ... ]