This was frantic. This was ferocious. This was football. West Ham seriously meant business and were 3-0 up against Arsenal after just 32 minutes. At half-time the only thing denying the Hammers from sitting in the top four was Chelsea and goal difference. By the hour mark though, David Moyes’s side had gifted the Gunners an in with two own goals. With eight minutes to go, Alexandre Lacazette got the equaliser to crush the Hammers. Brutal.

If only Michail Antonio’s sliding effort had gone in off the post rather than bouncing back off it. This is a game of fine, fine margins.

When you’re going for those top positions, aiming for those European spots, the pressure is on. It’s relentless. West Ham have experienced stress in recent seasons battling relegation but this is different. When you’re battling the bottom clubs, you can sometimes get away with a defeat here and there. When you’re taking on Chelsea, Tottenham and Liverpool, there is no room for error.

Here on Sunday, West Ham showed a ruthless streak needed to win on the regular but Arsenal kept fighting and fighting. So often in the Premier League era, it has been the north Londoners searching for Champions League football and beating the team from the east end. Not this season. The fact the Gunners are languishing in mid-table but still had the mettle to fight back will have pleased Mikel Arteta. Trailing so easily though will have not. 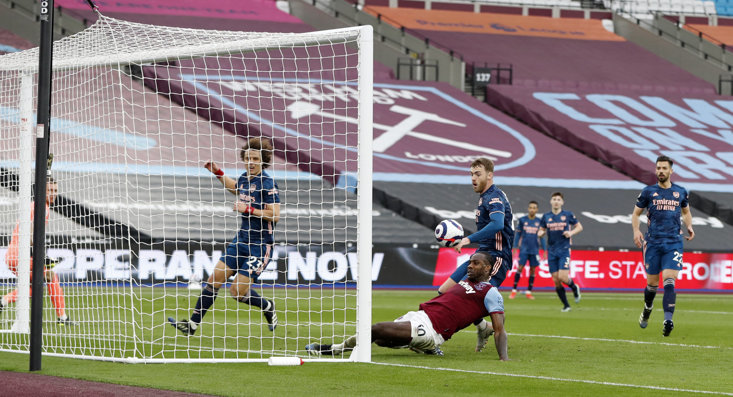 While the Spaniard is new to mamagement, Moyes is an old hand and been here before having guided Everton into the top four back in the 2004/05 season. As it happens, the man opposite him on the touchline at London Stadium, Arteta, was part of that Toffees team and will be well aware the Hammers manager knows what he is doing up in that part of the table. The Scot makes his teams organised and hard to beat and instils a fighting mentality.

West Ham showed that, taking a 2-0 lead with two quickfire goals. Jesse Lingard, another man who knows what it takes to reach Europe via the Premier League with Manchester United has been rejuvenated with the Hammers and netted his fifth goal since joining in January. The midfielder took the ball and as it bounced unleashed a brilliant, purposely sliced effort to hit the corner of the net. Lingard’s quick thinking helped double the advantage as he took a quick free-kick to set Jarrod Bowen who squeezed the ball in with Arsenal far too slow to react and caught on their heels.

Then it was three after only 32 minutes, as Tomas Soucek nabbed his ninth Hammers goal of the season. West Ham were cruising but then it happened. Arsenal showed the character they have often lacked in recent seasons. It was on display against Benfica, and at Olympiakos and again here.

Soucek, six minutes after finding one net, deflected the ball into the other at his own end to give Arsenal hope. Later, Hammers defender Craig Dawson scored an own goal, accidentally converting Calum Chambers low cross. Cue a nervy last half hour.

Moyes elected to bring on right-back Ryan Fredericks and midfielder Mark Noble for the attack-minded Bowen and Said Benrahma. West Ham were going to dig in. That’s not to say they couldn’t attack though and did. They could have made it 4-2 but Antonio lunge to meet a cross could only direct the ball against the post and West Ham had longer to endure. This game was not over. It was end-to-end stuff and then Arsenal struck. 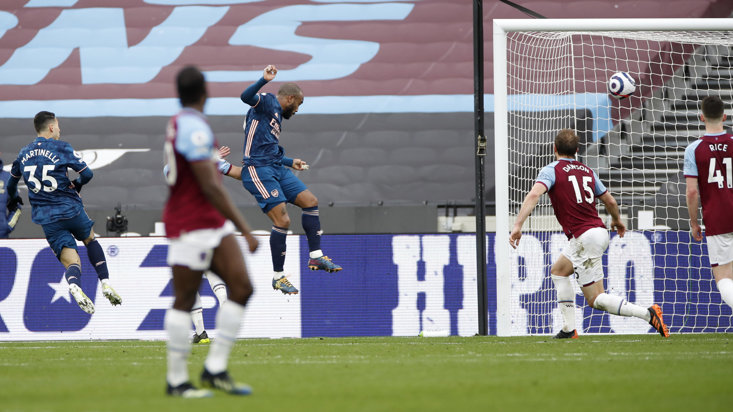 Nicolas Pepe was played in down the right and the Frenchman whipped in an inviting ball which his compatriot Lacazette duly headed home. Arsenal were level and West Ham had blown a three-goal lead. Declan Rice though kept his head up, marching forward looking for a winner and unleashed a powerful effort which was well parried by Bernd Leno.

"It was tough but look, we came back from 3-0 earlier in the season and it’s never nice when it happens, but I thought we were a little bit unlucky," said West Ham manager Moyes after the match. "We got a little bit sloppy after we’d played ever so well for the first 30 minutes which resulted them getting a goal just before half-time which, when you see it, was going wide before it hit Tomas and goes in so that was hard to take.

"Nevertheless, we had a good lead going in at half-time but the minute we lost that second goal we were feeling under pressure, but we also had some really good chances to go on and win the game ourselves."

This one will play over in the heads of West Ham’s manager and players for a little while. If only, if only. When they take on Wolves a week on Monday, they need to remember how they raced into the lead and not how they lost it. This was a blow but the top four is very much up for grabs.

Spurs moved up to sixth in the table after the victory courtesy of goals from Carlos Vinicius, his first in the Premier League after Lucas Moura assisted him following a poor Villa clearance, and Harry Kane, who netted from the penalty spot in the second half after being brought down in the area by Matty Cash.