The latest Premier League gameweek, having taken a backseat to share the spotlight in England with the FA Cup semi-finals, concludes with Maurizio Sarri’s Chelsea welcoming Manuel Pellegrini and West Ham United to Stamford Bridge in the latest London derby.

Chelsea can leapfrog another capital rival in Arsenal with a home win to jump into the last remaining Champions League qualification place in the table with five games left to go, whereas West Ham are attempting a respectable mid-table position and a still-undefined campaign under the league-winning Chilean.

It’d certainly be a little bit audacious a claim to suggest that recent meetings between the two teams have been particularly glamorous; the last two ended in the points betting shared in 0-0 and 1-1 draws.

It wouldn’t be entirely surprising to witness something similar; no side has conceded fewer home goals than Chelsea in the Premier League this season, letting only ten past. Only Arsenal and Manchester United, both with two, have scored more than once as a visiting side at Stamford Bridge this season.

Notably if either Chelsea or West Ham has indeed won their match-up, the last time they put more than two goals past the other was six years ago - at Upton Park - in 2013, with goals for Chelsea coming from Oscar, and a brace provided by former Hammers hero Frank Lampard.

Furthermore, in a congested capital with now seven teams competing in the top tier this season from the Greater London area, Chelsea have lost three home Premier League London derbies over the past four seasons as many as the five-time champions had in the previous 11 campaigns in the competition, in which they won 34 and drew 13.

On-the-other-hand, after a run of eight London derby matches without a win West Ham have won four of their last five in the Premier League, with the other being a draw.

West Ham currently claim the longest unbeaten run in the Premier League in games in which they have scoring, winning 12 and drawing five for a 17-fixture streak.

One travelling player in particular should be striving especially hard for personal glory; West Ham striker Javier Hernandez has scored in each of his last four Premier League away games against Chelsea. He will become only the fifth player in the Premier League era to score in five successive games away against at single opponent.

Only four players have scored in five consecutive away Premier League games against an opponent: Dion Dublin versus Tottenham Hotspur, Alan Shearer against Leeds, Ruud van Nistelrooy past Newcastle, and - perhaps most significantly - Arsenal legend Robert Pires in the North London Derby at the old White Hart Lane against Tottenham Hotspur.

The somewhat resurgent Hernandez - the Hammers’ highest paid player - since having to watch from the bench in West Ham’s loss to Manchester City at the end of February, has been involved in four goals in six games for both club and country, with the domestic season recently having to be interrupted for international attention.

Former Manchester United striker Hernandez moved back to the Premier League from the German Bundesliga and Bayern Leverkusen in 2014, a purchase for West Ham under manager Slaven Bilić.

Following scoring the only goal for West Ham in the 1-1 draw in west London exactly a year ago to the day the two opponents will meet face to face at the Bridge in the 2018/19 campaign, Hernandez tallied his fourth strike away at Chelsea, a brilliant run stretching back to his first season in England with the Red Devils in the 2010/11 season, a 2-1 win for Sir Alex Ferguson’s men.

Several months previous he had made his instant mark in England against the same opponent, his debut coming in the Community Shield final at Wembley with a truly individually unique goal, the second in a 3-1 victory with the ball ricocheting off his leg into his face and into the back of the net; a goal and an assist in the same movement!

Hernandez has scored a total of nine goals against the Blues in 14 meetings, with his side only defeated in a 90minute game 14% of the time in which he has struck.

However, even if Hernandez does join that special group of luminaries of Shearer, Pires et al to make it five away, the ultimate result might mean that Chelsea lose a Monday-night Premier League game at home for the first time since December 1994 and see their European hopes dented for another season. 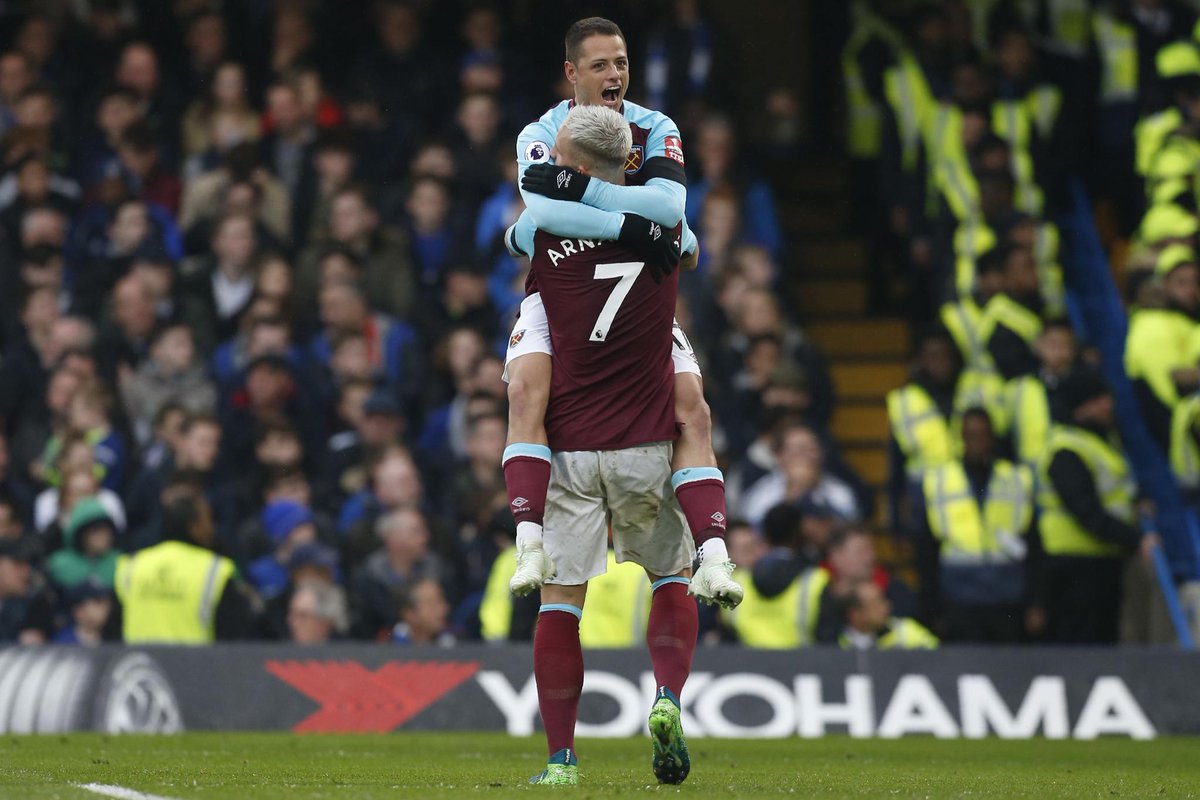