Judging by West Ham’s barnstorming start at Molineux, they had been chomping at the bit to get out onto the pitch and face Wolves ever since the full-time whistle blew at Stamford Bridge and Chelsea’s 5-2 defeat at home to West Brom was confirmed on Saturday. With Tottenham also dropping two points away at Newcastle, there was no way the Hammers were going to pass up this latest opportunity to enter the top four.

Running out 3-2 winners on Monday night, West Ham fans will be grinning like a teenager after the nightclub bouncer finally moves the red velvet rope and allows him to enter. With eight games to go, West Ham are in. As it stands, they are part of the exclusive group sat in those coveted Champions League positions. There is a long way to go but to be fourth as we approach the business end of the season is dream stuff for the east London club.

They were three-up on 38 minutes. Yes, they were three up six minutes earlier than that at home to Arsenal before being pegged back to draw two weeks ago. This time though, this time was different. Only just, but still. Sure, they let two in, but they had learned and ultimately kept the Wolves from the door.

Jesse Lingard put David Moyes’ side ahead after only six minutes, picking the ball up on the halfway line and steamrollering his way forward before galloping into the box and finishing with his left foot. Pablo Fornals doubled the lead on 14 minutes after more brilliant play by Lingard. The Manchester United loanee produced a stunning turn and flick to keep the ball in play before Arthur Masuaku crossed for Fornals to side foot home. 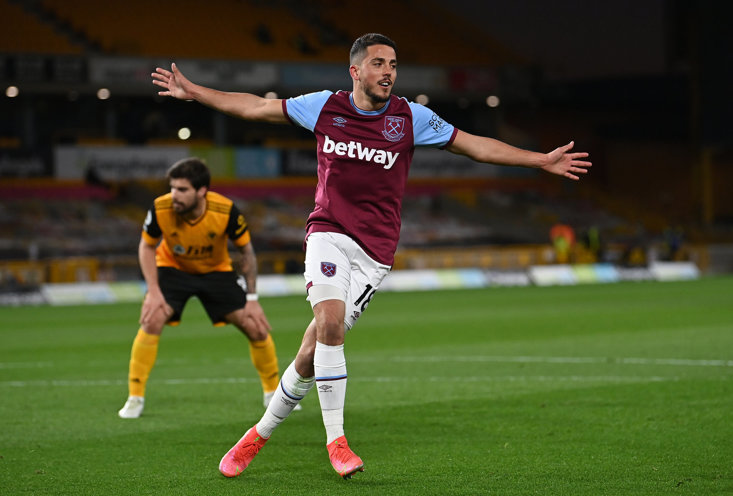 Lingard then turned provider for the third, racing into the opposition half with six Wolves players left chasing him before he teed up Jarrod Bowen who managed to keep up with him before lashing the ball into the back of the net. The 28-year-old playmaker, who earned an England recall last week, has made a massive impact for the Hammers and has contributed a goal or assist in all but one of his league games for the club.

Leander Dendoncker got a goal back for the hosts just before half-time which will have led to worry for the fans watching at home. Without Declan Rice, sidelined after picking up an injury whilst on Three Lions duty, West Ham weren’t as solid through the middle but dug in. Fabio Silva then drilled a shot past Lukasz Fabianski and with 22 minutes still to go, supporters will have feared the worst and muttered ‘Here we go again’. Wolves had two third of the possession in the second half as they probed for a leveller but West Ham held on to see the game out.

The victory took the East End club above London rivals Chelsea and they are only four points behind Leicester in third. Of course, Liverpool, Tottenham and the Blues will chase them until the last kick in May but West Ham will be full of confidence and looking forwards as they gear up to take on the Foxes in what will be a massive match next Sunday.

As for Moyes, he has been here before, taking an unfancied side into the top four after his heroics with Everton back in 2005. Then, he had a Spanish midfielder, in Mikel Arteta, and a player signed from the Championship, in Tim Cahill spearheading the push, just as he does now with Fornals and Bowen getting their names on the scoresheet here.

What helped the Toffees was the January arrival of Arteta. He provided a spark and boasted genuine quality. He created and controlled proceedings in the middle of the pitch. Sixteen years later, Lingard is performing the same role for Moyes.

On Monday at Wolves, he was again the driving force for the Hammers and everything good was instigated by him. He was hobbling in injury time which will be a concern but for now, West Ham can enjoy the moment.

Feeling wanted and relied upon, he’s excelling after being cast aside at Old Trafford this season. West Ham are reaping the benefits and who knows, perhaps Lingard and the Hammers could be in next season’s Champions League competing with Manchester United?

It would be deserved, for Moyes and Lingard have answered their critics through sheer hard work and will. The talent has always been there.

x
Suggested Searches:
Tyson Fury
Manchester United
Marcus Rashford
Lewis Hamilton
F1
Air Jordan
More
football
Quad Dream Remains Alive As Pep And Man City Advance To Champions...
Pep Guardiola reached his first Champions League semi-final with Manchester City after coming from behind [ ... ]
football
Manchester City Ready To End Champions League Quarters Curse...
If Manchester City are to win a historic and unfathomable quadruple this season, they must break their [ ... ]
football
Europa League Quarter-Finals: Everything You Need To Know Ahead...
The Europa League is reaching its final stages as we look forward to the second leg of the quarter-finals, [ ... ]
football
Breathtaking PSG v Bayern Munich Is Why The Champions League...
Utterly breathtaking. If the first leg was an absolute celebration of football the second leg more than [ ... ]
football
Manchester United, City, PSG… Where Could Harry Kane End Up...
Harry Kane has 217 goals in 329 games but still has no silverware to show for his stunning goalscoring [ ... ]
football
Chelsea's Time Is Now, Insists Thomas Tuchel Ahead Of Porto...
Chelsea manager Thomas Tuchel has urged his team not to ‘get lost in dreams, hopes and speeches’ [ ... ]
football
Ten Years Of The Women's Super League Proves Lightning Progress...
On the 13th April, 2011, a new era of women’s football began as the very first game of the Women’s [ ... ]
football
Brighton's Blue Monday Curse Continues But Point Against Everton...
Brighton’s Blue Monday curse continued at home to Everton as their failure to win in the Premier [ ... ]
football
West Brom Keep Slim Survival Hopes Alive With Impressive Win...
West Brom have a mountain to climb but still have a chance of pulling off a great escape to avoid relegation [ ... ]
football
Champions League Quarter-Finals: Everything You Need To Know...
The Champions League quarter-finals promise to be high on entertainment with Bayern Munich and Liverpool [ ... ]
football
Forest Green Rovers Or Chelsea: Where Do Female Managers Fit...
Dale Vince, chairman of Forest Green Rovers is used to doing things differently. Owner of the only vegan [ ... ]
football
La Liga Title Looms For Real Madrid After El Clasico - European...
El Clasico could have proved pivotal in a three horse La Liga title race, Leipzig closed the gap on [ ... ]
football
Alexandre Lacazette And Gabriel Martinelli Score As Arsenal...
Arsenal moved back into the Premier League top ten on Sunday with a 3-0 victory over Sheffield United [ ... ]
football
Edinson Cavani Ignores VAR Drama To Clinch Man United Victory...
Tottenham versus Manchester United was always going to be a game packed with quality and entertainment. [ ... ]
football
Jesse Lingard Fires West Ham To A Point Off Third With Brace...
Jesse Lingard is on fire right now. Spearheading West Ham’s pursuit of the top four, he is the [ ... ]
football
Super-Sub Allan Saint-Maximin Inspires Newcastle Comeback Victory...
Allan Saint-Maximin inspired Newcastle to a crucial 2-1 comeback victory at Burnley on Sunday which [ ... ]
football
In Pulisic, Mount And Havertz, Have Chelsea Found Their Perfect...
Thomas Tuchel may just have found his perfect front three, made up of two number tens and one natural [ ... ]
football
Leeds United Prove Bielsa Right As Manchester City Prioritise...
Leeds United. All out attack. Naive. No game management.  You know what? You can absolutely stuff [ ... ]
football
Premier League Fixtures: Everything You Need To Know For This...
We have wall-to-wall Premier League football to look forward to starting on Friday night, right [ ... ]
football
Why Does Manchester United's Europa League Success Still Feel...
Manchester City and Borussia Dortmund went toe-to-toe on Tuesday as Liverpool were torn apart in Madrid, [ ... ]
football
Mikel Arteta Hoping 'Big Slap In The Face' Will Have Positive...
Mikel Arteta will be desperate to see a reaction from his players when Arsenal line up against Slavia [ ... ]
football
Chelsea Return To Winning Ways Against Porto And Notch Another...
It seems Chelsea’s 5-2 defeat at home to West Brom on Saturday was nothing but a freak result [ ... ]
football
History Shows The Champions League Can Give Imperfect Chelsea...
Briefly, and perhaps only briefly, chaos reigns at Stamford Bridge once more. The five goals they conceded [ ... ]
football
Liverpool's Champions League Hopes In Tatters As Defensive Woes...
One wonders what Virgil Van Dijk must have made of that. The heavy metal football we have seen under [ ... ]
football
Jamie Carragher On Whether Steven Gerrard Could Be The Next...
Having taken Liverpool from mid-table to Europe’s top table, and guided the club to a sixth European [ ... ]
football
Alexander-Arnold Facing The Best After England Omission... And...
It was gloriously clever quick-thinking. Trent Alexander-Arnold cheekily took a quick corner catching [ ... ]
football
Why Erling Haaland Transfer Could Hinge On Manchester City Clash...
When you’re trying to hold onto one of your star players, one of the most potent strikers on the [ ... ]
football
Wasteful Everton Made To Pay For Home Woes Again As Palace Net...
This was an all too familiar feeling for Evertonians this season, dropping more points at home against [ ... ]
football
Football League Round-Up: Swansea Fall To Fourth Straight Defeat
Swansea’s hopes of achieving automatic promotion to the Premier League took another massive dent [ ... ]
football
Atletico Madrid Loss Gives Barcelona and Real Hope - European...
Real Madrid and Barcelona have been given hope in La Liga after Atletico's defeat at Sevilla but [ ... ]