Cricket
News
As the great Shane Warne, who sadly passed away earlier this month, always said “you need a balance between bat and ball with an edge to the bowler”.
Shane MacDermott
17:00, 23 Mar 2022

Sir Geoffrey Boycott had it right when he said “The future of Test cricket is at stake — lifeless pitches are killing the game”.

I understand the argument that Boycott wasn’t the most entertaining player to watch with his defensive, selfish style. But this time at least, he has a point.

There will always be a place for steady opening batters and there is certainly an art form with watching high-quality bowling be thwarted by a dogged defensive display.

Think back to Michael Atherton’s incredible near 11-hour rearguard to salvage England a draw as he negated an Allan Donald onslaught back in 1998. There are many similar innings which deserve plaudits for the same reason.

But the flat, batting paradises we have been force fed in the past few weeks will kill Test cricket. No ifs, no buts, no maybes, it’s as simple as that. It’s all too easy for the batters.

The England tour of the West Indies and Australia’s first trip to Pakistan for 24 years could both feasibly end in dour 0-0 draws. It’s just not what Test cricket needs.

One of the many issues with bringing new fans into Test cricket is they simply cannot comprehend how you can shake hands after five days of international sport and it ends in a draw.

There are already people calling for less Test cricket due to managing workloads and this will just add to the ammunition. I wholeheartedly disagree with the notion of playing four-day Test cricket, especially if the current pitches are failing to yield a result after five days!

The reason players are playing too much is because of the plethora of T20 tournaments around the world where they can earn large sums of cash for six weeks’ work.

You cannot begrudge players bolstering their bank balances as a mercenary, it certainly takes lesser toll on the body than the hard yards of five-day cricket. The career span of an international cricketer is short and these earning opportunities are too good to pass up.

But Test cricket needs to be protected at all costs. These pitches are sucking the life out of the format us purists love so dearly and something has to be done. 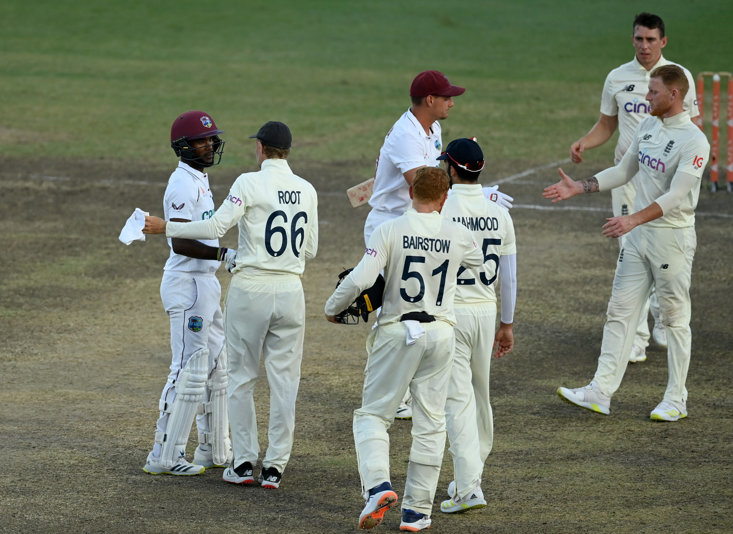 With an influx of T20 franchise cricket there is more of the sport on television than ever before. New fans want entertainment and attritional cricket on lifeless pitches is doing more harm than good.

I think T20 cricket should purely be played in franchise leagues around the world and international T20s should be limited solely to a World Cup every four years, not every two. I understand the financial reasons, but that’s for a different column.

Back to the matter at hand; new generations of cricket fans will be quickly turned off by watching Kraigg Brathwaite defend Jack Leach ball after ball…after ball. Even the most hardened lovers of Test cricket have struggled to stay engaged.

There’s no taking away from the West Indian captain’s record-breaking marathon first-innings 160. To bat over 16 hours in the game on his home ground was a phenomenal feat in concentration, but oh my was it boring to watch.

As the great Shane Warne, who sadly passed away earlier this month, always said “you need a balance between bat and ball with an edge to the bowler”.

I’m not saying home sides should prepare minefields where 150 is a good score like when India had raging bunsen burners when England toured there last winter.

But there needs to be something in the pitch to keep the bowlers interested. Low-scoring matches are always more exciting than when 500 plays 500 in the first innings. There’s an expectation that something can happen at any given moment, the ball beating the bat, LBW appeals, it creates drama and a sense of excitement.

Where was the usual Sabina Park spice which we’ve become accustomed to over the years during the first Test in the Caribbean? Steve Harmison’s 7/12 in 2004 was one of the greatest spells of fast bowling in recent memory.

The batters have also been filling their boots in Pakistan. The first Test saw 1,187 runs scored for just 14 wickets. The Aussie bowlers, who destroyed England in the Ashes, took 4/728 — that’s some serious leather chasing!

You wouldn’t mind if batters were scoring quickly, but Ben Stokes’ belligerent hundred in Barbados has been an exception to the rule. It’s been a tough slog all round.

But it’s the reasoning behind why the respective cricket boards are preparing dead strips which beggars belief.

The Caribbean is a tourist hotspot and seeing the Kensington Oval full of England fans was a sight so sorely missed over the last couple of years due to the Covid-19 pandemic.

It’s also great for the regions England are visiting that the Barmy Army are following them, putting much-needed revenue back into the struggling territories who saw tourism abruptly halted due to the virus.

But benign pitches where the ball rarely deviates from going gun-barrel straight just to keep revellers in the towns for the full five days so they are spending money is counter-productive.

And the fact the Pakistan Cricket Board are so scared of losing the first high-profile Test series back in the country for almost two decades is pathetic.

The commentators have even been gagged and told in the strictest terms they cannot refer to the pitches as “flat”. Granted, listening to Michael Kasprowicz backtrack on the first morning in Lahore was the funniest moment of the tour so far.

England start their third and final Test in the West Indies tomorrow. Let’s hope for a decent cricket wicket where the bowlers have a chance or they may as well shake hands now.