Football
News
Sheffield Wednesday and Bournemouth got their League Cup campaigns underway this weekend in front of their fans
Simon Lillicrap
20:05, 01 Aug 2021

Competitive football in England returned with fans this weekend for the first time since restrictions were lifted and as the League Cup returned, so did fans. Yesterday Bournemouth hosted MK Dons at the Vitality Stadium and this afternoon Sheffield Wednesday hosted Huddersfield.

For the first time in 17 months, football as we know it is back, and here is what the fans made of their return.

Olly May - Bournemouth Fan and YouTuber

Fans are back and it's everything we thought we had missed and more. I thought it was odd seeing stadiums empty back in 2020 but now it’s odd to see them full again. Football can be played without fans, but hearing fans chanting again is honestly top class and I’m sure it has a huge difference on the players too.

Over 7,000 fans were back at Dean Court for both Chelsea in pre-season and MK Dons in the Carabao Cup this week – with a sell-out crowd expected for the Championship season opener on Friday evening. Everything from the buzz around the ground, the shouts of the programme sellers, the smell of the burger vans to inside the ground with full stands again and the masses singing – this is football at its glorious best, up and down the country.

One highlight for me, away crowds. We’ve had patches of distanced fans in stadiums during parts of last season but one thing that has been lost since the pandemic began was away fans. To see away fans back in stadiums has been fantastic too – a cheer and applause from the MK Dons faithful yesterday as the home fans began chorusing ‘Five nil, on your big day out!’…. The fans are back! 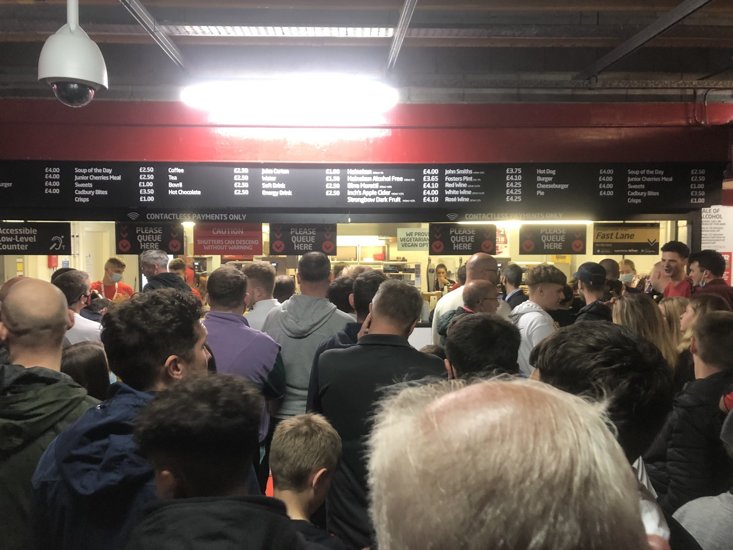 In terms of COVID, with little government restrictions in place, it comes down to fans and clubs to enhance their own safety procedures and ensure fans feel comfortable wherever their current stance on things. At Bournemouth, only two small windows were open to collect pre-paid tickets. Queues were formed around 1pm onwards and as I joined the queue at 14:20, I was told to push up as close as possible to the person in front of me to shorten the queue (really!). Eventually collected the tickets at 15:10 but the queues were a disaster for anyone trying to avoid contact. As football crowds are back but the virus is still spreading, I think common sense will be important at some grounds!

It was a great build up. Walking up to the ground there were lots of smiling faces and a buzz around the place. The usual pre-match announcements had a heightened level of cheer. Once the game settled down it soon settled into the usual sort of buzz. I’d summarise as a great pre-match, back to normal once the game got underway.

It felt fantastic. It’s the longest period in my adult life without being able to attend. We have been following the games on TV and online via streams but it’s just not the same as being there. It was great to finally get back after 515 days away. It’s a shame there wasn’t a goal to celebrate but that’s just how it is.

I think most people stayed with the team despite the performance not being sparkling. I didn’t notice anything, however some friends complained that the usual poor speed of getting food and drink at half time was still evident.

The club put some announcement out pre-match about wearing a mask if you can but I’d say 99% weren’t. We took our masks and put them on in the crowded pinch points but we were in the minority. It didn’t bother me and I don’t think anyone else was overly concerned.