Ding Junhui will be missing from January’s prestigious Masters tournament - reserved exclusively for snooker’s top 16 players – for the first time since 2006 as an 18-year-old, following a latest fallow period that has lasted two years since his UK Championship win in 2019 in York.

And his slump in form and results, arguably now lasting for six years punctuated by good runs in three big-money ranking tournaments that propped up his world ranking, is seeing people ask the question – is the ultra-talented Chinese superstar and former world No1 once touted as an absolute shoe-in to be a multiple world champion finished at the very top level?

Even saying the words just sounds wrong about a 34-year-old blessed with sublime snooker skills who should by rights be at the very peak of his powers. To the natural ability he was born with and the dedication shown to get him to world No1, Ding should now be allying experience, savvy, know-how, match-play and an iron will to win.

But those other attributes have been missing. And even Ding’s legendary cue ball control and break-building has been letting him down in the pressurised moments.

From the moment Ding won his home China Open as a teenager against Stephen Hendry in the final in Beijing, he just seemed special. Trading home life for one in the UK to develop his craft was a huge move, and initially having turned pro at 16 and based in Northamptonshire before moving to Sheffield, tour life was tough.

But gradually titles started to come along, including a first of three UK wins in December 2005. Ding has in total won 14 ranking titles and a Masters crown, while at the same time earning the near-total respect of his peers. After years of under-achievement on snooker’s biggest stage, the Crucible Theatre, Ding reached his only Betfred World Championship final to date in 2016 – losing to Mark Selby.

However the aura has been dimmed. Excepting the run to the final in Sheffield, the World Open win in Yushan in 2017 and the UK title in 2019, the overall trend over the calendar has been down for years, with Ding lacking the consistency shown by rivals Selby, Neil Robertson, Judd Trump and Ronnie O’Sullivan. 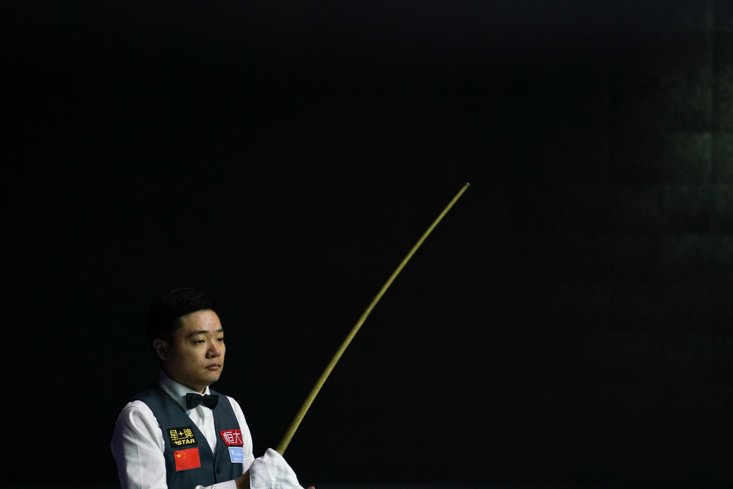 Ding has won one ranking title in the last four years. It is a far cry from the 2013-14 campaign when he claimed a then record-equalling five, since eclipsed by Trump with six. And he will plummet to No25 in the world rankings or below after the UK, a situation that could easily worsen further by the end of the season.

In addition Ding, for so long China’s talisman, is down to No3 in the national rankings behind Masters champion Yan Bingtao and Zhou Yuelong – and with also Xiao Guodong and Zhao Xintong breathing down his neck, that might soon become No5.

Few players – with Iran’s Hossein Vafaei and his visa issues being one exception – have missed as many tournaments as Ding in the last few years - some by choice, others through circumstance. And those absences have hurt him both in terms of ranking and also match sharpness when he does play.

Speaking at the English Open at the start of November, Ding offered a window into the disruption to his work and family life during the pandemic. He said: “The last two years have been very difficult for everyone, and it has also been a problem for me. We are getting back a bit to normal on the tour, with fans back in at the tournaments.

“My enthusiasm is not really back yet for the big events. I have only been back in the UK for three weeks and had to spend 10 days in quarantine, so it is hard getting the feeling back. And that has shown in some of my matches in this tournament.

“I was back in China for around five months, but there was no one to play with there so I was practising on my own – and sometimes that is very difficult. Doing that for many months you can lose concentration.

“I will be here now in the UK for some months including the shorter format events, and I plan to be here until the end of the season. My family are still in China, and we will have to see what happens in the next few months. That was very hard last season, and I came back alone again this time.

“Hopefully they will be okay in Beijing and can come at some point. Firstly I have to keep myself safe, because I don’t want them worrying about me over here. Then the second thing is I don’t want to put my family in danger. Some people wear masks here, some do not. I can’t stop that, but I can protect myself and my family. I don’t really go out anywhere over here.”

There can be little doubt that such factors have played a part in Ding’s current malaise – but that is almost certainly not the whole story, because there are long spells over the previous four years when his results and form have suffered similar prolonged lulls.

It isn’t ability – so what is it? Record seven-time world champion Stephen Hendry observed at the UK Championship where Ding lost to Sam Craigie that he just didn’t appear to be that bothered about going out of the tournament. All players react differently, but Hendry’s point looked well made.

Is Ding just too comfortable in life? Ding seems a very happy family man, and proud husband and father though not being with them must hurt.

There have been plenty of reports and speculation that some of his commercial arrangements back in China provide an ample safety net that would more than compensate for any dip in prize money earned on the table. Figures of up to £500,000 per year have been mentioned.

Many true fans of snooker will be hoping that Ding rediscovers his mojo. If he does, there is still plenty of time to add to his CV. But the doubts are growing.

x
Suggested Searches:
Manchester United
Liverpool
Manchester City
Marcus Rashford
Premier League
More
snooker
World No1 Mark Selby Opens Up On Serious Battle With Mental...
Mark Selby admits that the gruelling demands of snooker on the mind are so great that it is impossible [ ... ]
snooker
Kyren Wilson: Return to Berlin is Bitter-Sweet
Kyren Wilson admitted that playing a first tournament overseas for the tour for two years at the German [ ... ]
snooker
Remembering Ronnie O'Sullivan's Resurrection Ahead Of Landmark...
The Butterfly Effect is where one moment can change the course of history. In this case one tournament [ ... ]
snooker
Shaun Murphy: Return To German Masters Feels Like A Huge Moment...
Shaun Murphy admits that seeing this week’s German Masters returning to Berlin feels like a huge [ ... ]
snooker
Prince of Persia: Iran’s Hossein Vafaei Wins The Snooker Shootout...
Snooker’s Prince of Persia Hossein Vafaei proved himself to be king of the Shootout on Sunday [ ... ]
snooker
John Higgins Desperate To Attract New Fans To 'Stuck In The...
Snooker star John Higgins would love to see an influx of new fans in the sport before he hangs up his [ ... ]
snooker
15-Year-Old Schoolboy Wildcard Stan Moody Is A Shoot Out Sensation
Schoolboy Stan Moody claimed a sensational debut big-tournament victory at the quickfire Shoot Out on [ ... ]
snooker
Peter Devlin Raps On Stage Alongside Jessie J In Snooker Shoot...
Peter Devlin hopes he can perform on the Shootout stage as well as he did with singer Jessie J earlier [ ... ]
snooker
18.5m Viewers And Upside-Down Glasses: Dennis Taylor Ruled Snooker...
Snooker may never quite see another high-watermark like the 1985 World Championship final with its 18.5million [ ... ]
snooker
Neil Robertson: Other Tournaments Need To Match Incredible Ally...
Neil Robertson has urged the Crucible crowd to up their game as a spectacular Masters spectacle this [ ... ]
snooker
Neil Robertson Builds On Australian Ashes Success With Masters...
Neil Robertson piled Masters success on Ashes misery as the latest Australian to demolish England’s [ ... ]
snooker
Barry Hawkins Digs Deep To Book Masters Final Showdown With...
Barry Hawkins took his place in the Masters final after coming through yet another Alexandra Palace [ ... ]
snooker
Paul Hunter: The Great Man The Masters Trophy Is Appropriately...
Among many poignant moments at the 2022 Masters at Alexandra Palace, one perhaps stood out above all [ ... ]
snooker
Robertson Wins Masters Thriller To Reach Final But Celebration...
Neil Robertson produced an astonishing comeback to reach the Masters final by beating Mark Williams [ ... ]
snooker
World Number One Mark Selby To Seek Help Over Mental Health...
World No1 Mark Selby has revealed he will be seeking help over the current state of his mental health. [ ... ]
snooker
Neil Robertson Vows To Jump In Icy Alexandra Palace Lake If...
Neil Robertson has vowed to jump into the icy Alexandra Palace boating lake if he wins a second Masters [ ... ]
snooker
Judd Trump Insists Masters Atmosphere Is More Like Boxing Than...
Judd Trump laid out rival Kyren Wilson with a series of hammer blows on Friday – and then insisted [ ... ]
snooker
Masters 2022: Williams Edges Out Old Rival Higgins In An Alexandra...
Both Mark Williams and John Higgins testified to one of the most extraordinary atmospheres ever seen [ ... ]
snooker
Neil Robertson: Ashes and Michael Jordan Inspired Me Against...
Australia’s Neil Robertson took inspiration from both the Ashes and sporting legend Michael Jordan [ ... ]
snooker
Kyren Wilson Relishing Masters Clash With Rival Judd Trump
Kyren Wilson became the second man to scrape into the Masters quarter-finals on Wednesday – as [ ... ]
snooker
Judd Trump Edges Into Quarter-Finals But Mark Allen Still Smiling...
Mark Allen was still smiling on Wednesday night despite an agonising Masters final-frame defeat to Judd [ ... ]
snooker
Masters 2022: Snooker’s Class Of 1992 Still Thrilling Crowds...
All three of snooker’s famous Class of 1992 of Ronnie O’Sullivan, John Higgins and Mark [ ... ]
snooker
Ronnie O'Sullivan Wows Rolling Stones Pal Ronnie Wood With Masters...
Ronnie O’Sullivan wowed Rolling Stone Ronnie Wood as the Rocket got his bid for an eighth Masters [ ... ]
snooker
Shaun Murphy: Masters Defeat Is Just More Pain On Top Of Back...
It wasn’t just the pain of a disappointing Masters first-round defeat to Barry Hawkins that was [ ... ]
snooker
Ranking The Five Greatest Masters Finals - Featuring Williams,...
There were some near misses, and I have chosen to leave out the superb comeback victory for a 39-year-old [ ... ]
snooker
Masters 2022: History-Making Higgins Books His Place In The...
John Higgins made history when he walked out against reigning UK champion Zhao Xintong at the Masters [ ... ]
snooker
Fired-Up Mark Williams Defeats Wayward Defending Masters Champion...
Defending Masters champion Yan Bingtao had a bad start to his Sunday, getting lost while being [ ... ]
snooker
The Constant Uncertainty Surrounding Djokovic Could Impact His...
Detained and then isolated at Melbourne Airport on arrival from the Middle East, Novak Djokovic has [ ... ]
snooker
Steve Davis Looks Back At His Stunning Masters Win Over O’Sullivan...
Steve Davis still believes his last major tournament win owed plenty to a streaker breaking Ronnie O’Sullivan’s [ ... ]
snooker
Changing Of The Guard: China’s Hopes For Snooker Domination
When Ding Junhui burst onto the snooker scene in spectacular fashion in 2005, many expected the Chinese [ ... ]