Shaun Wane’s reign as England head coach got off to a stuttering start on Friday night as they fell to a 26-24 defeat to the Combined Nations All-Stars in Warrington.

On face value this was a concerning result for an England side that won’t play again now until a week before their Rugby League World Cup opener against Samoa, but Wane insisted that there were plenty of positives to take out of his first game in charge. So what did we learn?

Let’s start off with the mitigating factors; the team that lines up at St James Park on 23 October will look very different to the one that stepped out at the Halliwell Jones. Covid-19 further complicated the selection process for Wane, who was already without his Australia-based players, and there were a number of injuries to key players, including St Helens duo Alex Walmsley and Johnny Lomax who dropped out in the training camp. Realistically, England were probably short of 10 players who would have made the squad in a world without restrictions.

Although not ideal, this did produce opportunities for a number of players to make their senior England debuts, and there were impressive performances from the likes of Morgan Knowles and Mikolaj Oledzki. Knowles, who had previously represented Wales at the 2017 World Cup, started at prop for England, which is not a position we’ve seen him play much for St Helens, but he looked aggressive in the middle throughout and ran a number of clever lines, including one which led to his first try in an England shirt.

There were also a number of encouraging performances from some of England’s returning old guard. Wane called upon one of his former Wigan charges, Liam Farrell, for his first England appearance since 2016, and the second-rower didn’t look out of place as he crossed for both of England’s tries in the first half.

Sam Tomkins drove 16 hours from the South of France after getting the call-up to the England side, but there was no sign of fatigue as put in a solid performance at full-back. In his first appearance as England captain, the Catalans Dragons star looked lively with the ball in hand, and was imperious against the kicking game of Jackson Hastings and Aidan Sezer. If the battle for the number-one shirt at the World Cup is a three shouot-out between Tomkins, Zak Hardaker and Jake Connor, it’s advantage Sam.

The one big criticism that will be levelled at Wane and his side was that they lacked creativity in attack. Whilst this is a fair argument, it’s difficult to be worried this far away from the World Cup. Johnny Lomax would surely have started in the halves for England had he not withdrawn with injury on the eve of the game, and it’s unlikely that Luke Gale and Stefan Ratchford would have spent much time working as a pairing in training.

Throw in the anticipated returns of George Williams and Josh Hodgson into the fold and it is likely that England’s spine will look very different come October. 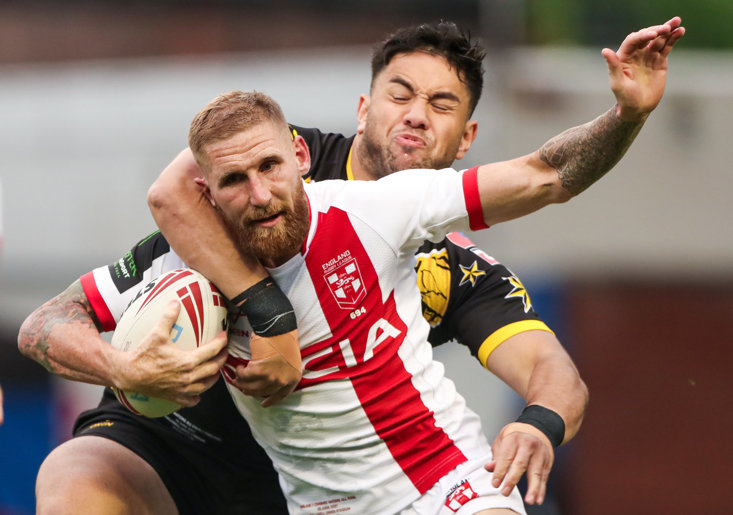 The Combined Nations All-Stars was a side put together with the sole intention of giving England the sternest possible test available during the domestic season, and despite having to negotiate a selection minefield of his own, head coach Tim Sheens had assembled a squad littered with some of the best players available in the Northern Hemisphere.

Any side that can boast a pairing of 2020 Dream Team half-back Sezer and 2019 Man of Steel Hastings will take some beating. Throw in a number of other seasoned internationals such as Ricky Leutele and Jermaine McGillvary and you have a backline capable of unlocking any defence. If the objective was to provide a test-match standard fixture for Wane to get his teeth stuck into, it was definitely achieved.

So where does this leave England five months out from the World Cup?

There’s a lot to work on, especially with the ball in hand; but they will get better. The combination of returning injured players and NRL stars, and increased time together as a group, will give Wane and his coaching staff plenty of reason to believe that they can put together a game plan to beat the likes of Tonga and Australia.

You can’t ignore the fact that Wane has started his tenure with a defeat, and there’s no one that will annoy more than him, but this wasn’t really about the result. It was about getting game time in an England shirt again, against the best available opposition, and in that respect the exercise was a definite success.

No one will have walked away from the Halliwell Jones on Friday absolutely certain that England will be lifting the World Cup in November, of course Australia remain favourites, but the ingredients are definitely there and there’s more to arrive. If there’s one man who can put them all together in time, not many would bet against it being Shaun Wane.