In 1987, Maradona took Napoli to their first ever Serie A title just a year after he’d almost single-handedly won the World Cup in Mexico with Argentina; but if things had worked out a little differently one of the greatest talents the world has ever seen could have been playing for Sheffield United.

The stories of clubs the world over are often defined by fateful, occasionally chance, transfers, from big money ‘marquees signings,’ to bargain buys which turn out to be a masterstroke when their potential is eventually realised.

But then there are the tales of what might have been. The ones that got away; leaving supporters frustrated and players taking a different path in life, sometimes for better, sometimes for worse.

And no greater example of this occurred during the summer of 1978 when one of the most promising young talents the game had ever seen almost signed for a second-tier English club which hadn’t won a trophy since 1925 and often played their games in front of gates of less than 20,000.

Diego Armando Maradona caught the eye of talent scouts at the age of just eight while he was playing in his neighbourhood club Estrella Roja and would quickly establish himself in the junior team of Buenos Aires's Argentinos, known as Los Cebollitas.

Not short of confidence, as a 12-year-old ball boy he would keep spectators entertained by showing his wizardry with the ball during the halftime interval of games, little surprise then that he would name Brazilian playmaker Rivelino and Manchester United star George Best among his heroes growing up.

He would make his professional debut 10 days before his 17th birthday in 1976 and after the match claimed: “That day I felt I had held the sky in my hands” just a few weeks later he would score the first of his 115 goals in 167 appearances for the club.

But Maradona wasn’t the only player from South America setting the world alight at that time with their extraordinary abilities, something that was brought to the attention of millions during the 1978 World Cup which was held in Argentina and is still regarded as one of the most colourful and exciting in the competition’s long history.

It wasn’t just the vast crowds and ticker tape celebrations which made the tournament such a spectacle as many of the Argentina players who helped the host to lift the famous trophy that year would go on to become the most eye-catching of their era.

The goals of Mario Kempes, who would finish as the top scorer of that World Cup, the dribbling prowess and sultry skills of Ricardo Villa, and the vision and intelligence of Osvaldo Ardiles would make them all household names on both sides of the Atlantic.

As a result, a number of English managers turned their attentions to South America in an effort to unearth the next big talent, one of which was the pioneering Sheffield United boss Harry Haslam, who was prepared to ignore the difficult international relations which existed with Argentina at the time to pioneer the signing of foreign players for his side.

The 1978 World Cup had been one of the most controversial as host nation Argentina had undergone a military coup just two years earlier; but that didn’t deter Haslam who negotiated first refusal on World Cup winners Osvaldo Ardiles and Ricardo Villa.

Though with the United board reluctant to stump-up the cash required to get their men, he ended up brokering a deal that saw the pair move to Tottenham instead, generating one of the biggest football stories of the decade and paving the way for a generation of overseas stars to shine on the English stage. 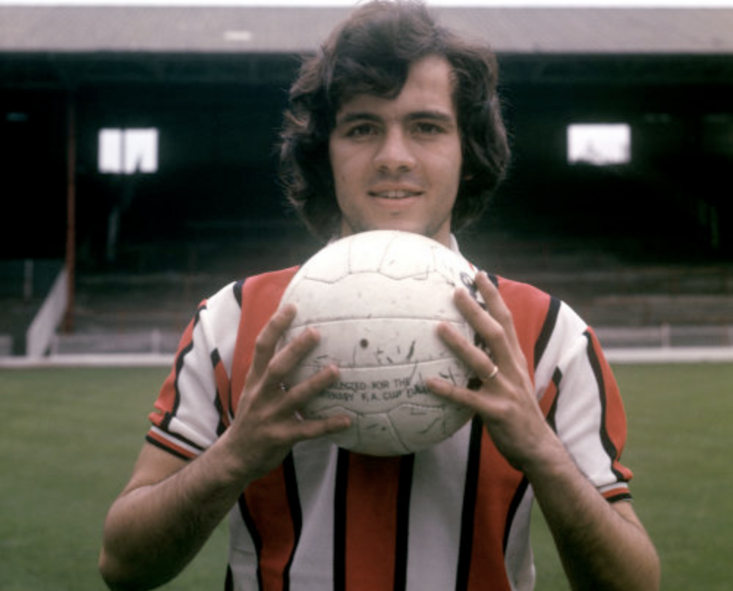 Alex Sabella joined Sheffield United from River Plate and thoughe he did well in South Yorkshire, he was no Maradona

However, the trip was not in vain as the Blades boss came across a 17-year-old Maradona, who was not selected for the World Cup due to his age, and all but sealed a deal of around £200,000 to bring him back to Sheffield in what would have been the most audacious transfer in the history of the game.

“Diego was actually ready to go,” John Ludden, author of the best-selling book ‘Once Upon a Time in Naples,’ tells The Sportsman. “It was a real offer, around £400,000 in total for Maradona and another player called Carlos Fren, the air tickets were even booked.

“Then greed showed its head as agents and other figures demanded more money, with the transfer eventually collapsing. He was only 17, but already a genius. So you could say It was a huge opportunity missed.”

With the board vetoing the move due to the high cost, United instead turned their attention to the slightly more affordable Alex Sabella, bringing him to Bramall Lane from River Plate for £160,000 rather than Maradona, who eventually signed for Boca Juniors before moving to Barcelona for a record fee of £5 million following the 1982 World Cup.

Though Sabella was held in high esteem by the United faithful, and anyone attending Bramall Lane at that time will remember the thrill of having an Argentinian international in the team, he was no substitute for Maradona.

An exciting wide player who was able to beat a man and whip in a dangerous cross Sabella was a decent footballer in his own right as well as being a colourful character off the field due to his left-wing political beliefs; but was unable to prevent the Blades from being relegated to the Third Division in his first season before eventually leaving to join Leeds in 1980.

As for Maradona, he would join Napoli in 1985 where he would win two Serie A titles, the Coppa Italia and the UEFA Cup while lifting the World Cup for Argentina at Mexico ‘86 on the way to being widely regarded as the greatest player that ever lived.

The film - Diego Maradona - goes on general release on June 14

Diego Maradona Movie
@MaradonaMovie
From the Academy Award-winning director of SENNA and AMY comes DIEGO MARADONA - the ultimate story of talent, glory, corruption and redemption. In cinemas June 14 #DiegoMaradonaMovie
1378
3240
x
Suggested Searches:
The Sportsman
Manchester United
Liverpool
Manchester City
Premier League
More
football
Why Do We Love Our Football Club - Part Four: The History, Trophies...
In this five-part series, The Sportsman will be exploring one of football's biggest questions. Just [ ... ]
football
Uefa's Concussion Ignorance Is Putting Footballers In Serious...
Oh, the Uefa Champions League. That pinnacle of club football, with its unwieldy restructure in order [ ... ]
football
The Next Man In: Saints To Task Legend Wellens With Emulating...
St Helens will make club legend Paul Wellens their new head coach, tasked with emulating the stunning [ ... ]
football
EPL TV Money Could Be Spread Around The World: CEO's Ideas For...
After battling through qualifying, F.C. Copenhagen returned to the Champions League group stages this [ ... ]
football
Fantasy Premier League Gameweek Nine: Wildcard Mayhem And Liverpool...
After a long international break, Fantasy Premier League returns this weekend with a full [ ... ]
football
LIVE Football Blog: Team News Expected For Club Football's Return
It's Thursday, which means that there's not too much on the TV in terms of football tonight, [ ... ]
football
Why Do We Love Our Football Club - Part Three: The Kits, Colours...
In this five-part series, The Sportsman will be exploring one of football's biggest questions. Just [ ... ]
football
The Top 10 Teenagers From Europe's Top Five Leagues So Far In...
Football is filled with teenage talent. There are currently so many incredible young players in senior [ ... ]
football
The Fantasy Premier League Stars Who Look Set To Miss Out On...
A video circulating around social media on Tuesday night has left Fantasy Premier League managers fearful. [ ... ]
football
How Mocked Manchester United Full-Back Gary Neville Became The...
Manchester United’s treble-winning squad in 1999 was packed full of talent. From Peter Schmeichel [ ... ]
football
How Cristiano Ronaldo And Lionel Messi Can Meet In The World...
Cristiano Ronaldo or Lionel Messi. That is the football civil war of the ages that has divided supporters [ ... ]
football
Who Are The Most In-Form Teams Heading To The Qatar World Cup?
That’s it. The last international break before the World Cup in Qatar has passed and teams will [ ... ]
football
Everything You Need To Know About The Euro 2024 Qualifying Draw
Following England and Wales’ relegation from the UEFA Nations League A during the most recent [ ... ]
football
LIVE Football News: Attention Turns Back To Club Football
Welcome to The Sportsman's LIVE football blog, where we will be bringing you all the latest news [ ... ]
football
Are Any Of England's U21 Starlets Close To A Shock World Cup...
Lee Carsley has quietly gone about improving England’s U21 side. After the Aidy Boothroyd era [ ... ]
football
The Ghosts Of Vicarage Road: Watford's Treatment Of Managers...
As inevitable as a lying politician or a Michael Buble Christmas album, Watford FC have sacked their [ ... ]
football
Scotland Secure Nations League Promotion Thanks To Dogged Defending
Scotland have done it. They have been promoted to UEFA Nations League A after they secured a hard-earned [ ... ]
football
Why Do We Love Our Football Club - Part Two: The Stadium
In this five-part series, The Sportsman will be exploring one of football's biggest questions. Just [ ... ]
football
Former Chelsea Midfielder John Obi Mikel Retires From Football
Former Chelsea midfielder John Obi Mikel has announced his retirement from football. The Nigerian has [ ... ]
football
England v USA Squad: Lucy Parker And Jess Park Earn First Lionesses...
Sarina Wiegman has recalled Fran Kirby and Euro 2022 final hero Chloe Kelly to the England squad, while [ ... ]
football
Jude Bellingham: Birmingham City Fans Knew He Was Destined For...
Across the whole of Europe right now, there is one player on everyone’s lips. Jude Bellingham [ ... ]
football
Out Of Time: The World Cup Is Arriving At The Worst Moment For...
World Cups are supposed to be in summer. They just are. But sometimes a break from tradition can be [ ... ]
football
Chris Wilder To Bournemouth: What's Gone Wrong For Wilder At...
It was set to be the match made in heaven, but now Chris Wilder is in the middle of a nightmare as the [ ... ]
football
Gareth Southgate's Eight Nailed On England Starters For The...
That’s it. All the warm-up games are now done and although England are now six without a win, [ ... ]
football
LIVE Football Blog: Final Day Of Nations League As International...
At long last, the international break comes to an end tonight with the final round of UEFA Nations League [ ... ]
football
Scotland's John McGinn Targets Nations League Promotion Amid...
He captained his country to two significant victories, earned his 50th cap and became Scotland’s [ ... ]
football
England 3-3 Germany: Southgate's Subs Lift The Mood As Goalscoring...
When Gareth Southgate’s England side were battered and bruised against the ropes, their nose bloodied [ ... ]
football
Why Do We Love Our Football Club - Part One: The Fans
In this five-part series, The Sportsman will be exploring one of football's biggest questions. Just [ ... ]
football
Long Live The Meaningless Friendly: Why The Nations League Has...
The dust has settled on England and Wales’ relegation from Nations League Group A. The ramifications [ ... ]
football
The Search For Harry Maguire: England’s Most Confounding Footballer
Harry Maguire is English football’s greatest enigma. Everyone has an opinion on what he is and [ ... ]