If you think England playing World Cup football in November later this year is weird, what about that time they were knocked out before breakfast? The first Asian finals, played in Korea and Japan in 2002, had our alarm clocks weeping as we suddenly became morning larks in our millions in order to follow as many games from the Far East as we could.

This was the World Cup of Papa Bouba Diop, of France’s failure, Roy Keane’s Saipan strop, Byron Moreno and Ronaldo’s cheese-wedge haircut. It was also the summer when our nation’s kids couldn’t get to school quick enough, with mass-viewings of England’s early kick-offs arranged in assembly halls and oversized classrooms.

We’d been eased in gently to begin with, the first England group game being a 1-1 draw with Sweden in Saitama which kicked off at 10:30 UK time on a Sunday, and the 1-0 win over Argentina which followed in Sapporo was a 12:30 Friday start.

But the 0-0 stalemate with Nigeria in the final Group F fixture tested our resolve in more ways than one. Firstly it was a 7:30am kick-off on a Wednesday. Secondly it was a bloody awful game of football. It turns out a 15:30 start in Osaka isn’t ideal when it comes to dealing with climatic issues.

The two sides looked completely drained in the searing heat, England seemed unsure how much they really wanted to bust a gut for a win when a draw might do, and we were all left wondering whether we’d have been better off sat in double maths after all.

The round of 16 clash with Denmark was a cakewalk for both players and fans alike. The Three Lions were three up by half-time and we’d had a nice, slow wake-up for the 12:30 kick-off, but we knew that progress would result in another 7:30 game the following Friday against Brazil.

That June 21 morning we put our Weetabix on hold to don our England shirts, drape the cross of St George on our backs and sit in front of the TV as over in Shizuoka our stars seemed to be doing our early-rising selves proud. Michael Owen pounced on a Lucio error from a misplaced Emile Heskey pass to give England the lead and Sven-Goran Eriksson’s winning formula looked to be working. 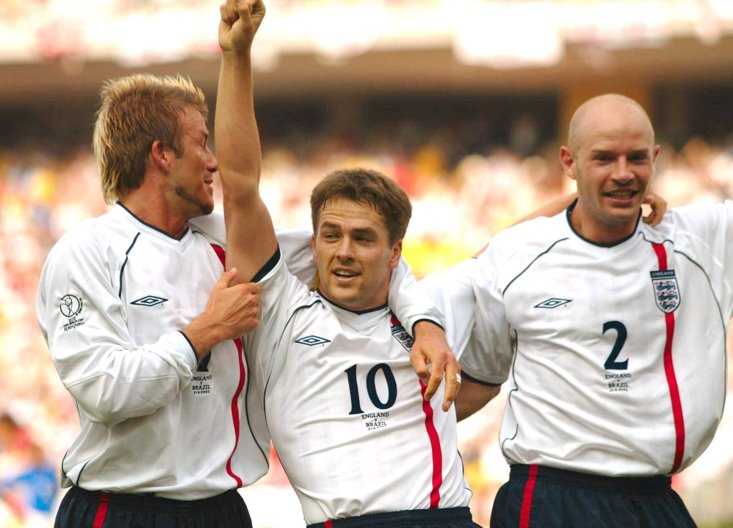 But when the clearly-still-half-fit-after-a-metatarsal-injury David Beckham didn’t see a ball out of play and Brazil countered to score an equaliser through Rivaldo just before the break, we started to feel the old feeling again. That quip about Ronaldinho’s suspension for an accumulation of bookings kicking in for Copa America qualifying suddenly felt like a tempting of fate straight out of Final Destination.

And so it would be. Five minutes after the interval, Ronaldinho’s speculative free-kick cleared everyone in the box, including a backpedalling David Seaman, and found the top corner of the net. Brazil were 2-1 up and England looked incapable of upping the tempo just when they needed it most. Even after ‘Dinho had been sent off with 33 minutes still to play for a second yellow card, England had nothing. The energy just wasn’t there, sapped by the Japanese heat. Turns out they hadn’t had their Weetabix either.

The final whistle sparked that familiar feeling of disappointment, but this time it was mixed with a reminder that there was a full day of school, or work, or life, still ahead of us. This was not any normal World Cup exit, after which you could head pretty much straight to bed and hope the new day gave a fresh perspective. No, this was a defeat we had to sit and stew on while Mr Murray took us over the finer points of the Spanish Civil War.

What a way to start a day. Breakfast has never tasted so sour.