Football
News
The stats show that when it comes to Instagram dominance, everyone pales in comparison to CR7
Jack Porter
10:18, 07 Jan 2020

Five-time Ballon d’Or winner Cristiano Ronaldo baptised the new decade by producing his first hat-trick for Juventus, against Cagliari, and in doing so becoming only the second person this millennium to score three goals in a single match in the Premier League (with Manchester United), La Liga (Real Madrid), and now Serie A.

Away from his scintillating activities on the pitch, CR7 had notably arrived at the Allianz for the league fixture wearing a 4th Generation iPod Shuffle that was first released ten years ago. The retro fashion statement from the footballer who is worth upwards of an estimated £360million inevitably set social media ablaze.

This is, of course, to be expected. Ronaldo is as prominent on a variety of internet-based platforms as he is on the pitch, as adept at selling his image as he is at banging goals (733 and counting). With an army of close to 400million across all platforms, he is the most followed athlete on social media.

In 2018, after nine years in the Spanish capital with Los Blancos, he signed a four-year deal worth half a million pounds a week in Turin with Juve, which currently provides him with a fairly admirable £25.79m ($34million) a year base from the Bianconeri.

However, his squadron on the photo-sharing app Instagram, that makes him the most followed person on the platform on the planet, earns him an estimated £36.36m ($47.8million) per annum, his tactical posts generating revenue through a variety of advertising endorsements.

An eye-watering 200million humans follow the Portuguese via Instagram. To put this in perspective, this is the combined population of France, Italy, the United Kingdom, and Belgium (with a bit leftover), or 2.5% of planet Earth’s human race.

The 34-year-old father-of-four Ronaldo was granted a stonking 6,403,853 hashtags by users on Instagram across 2019, with data compiled by LiveFootballTickets.com which assessed the presence of the most recent Ballon d’Or nominees on Instagram. 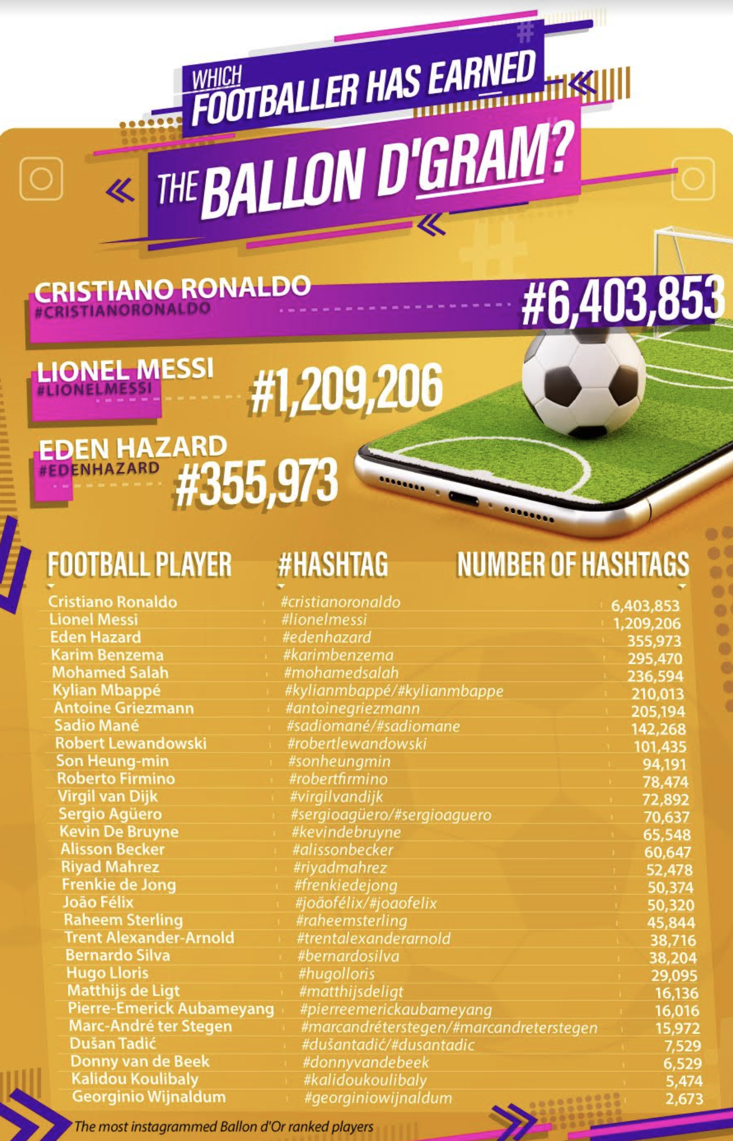 And it truly shows that in this capacity, Ronaldo truly rules the roost. In fact, if you added up all the Instagram hashtag mentions of the 28 closest players to him that would only amount to 3,573,875, or marginally over 55% of CR7’s total tally, to truly assert him as the preeminent proponent.

Lionel Messi is as expected, second in the running, the Argentine over five million hashtags behind but still with an admirable 1,209,206. The last podium position is afforded to one of Real Madrid’s latest acquisitions, and Ronaldo’s heir apparent Eden Hazard, who moved from Chelsea to the Santiago Bernabeu in an £89m deal in summer ‘19. The Belgian had 355,973 hashtag mentions in the last calendar year.

The Ballon d’Or may not have been Ronaldo’s to take home last time out, but the soccer superstar can take comfort that when it comes to social media sovereignty, no one comes close.