Propped up by a mixture of celebrities, retired fighters, influencers and the odd rising boxer, Triller presents boxing in a way we have never seen before. However, it is fair to say that most of those involved are below their peak by the time they end up on the service. The days of world championships and packed arenas are behind combatants like Evander Holyfield and Tito Ortiz, who will step into the Triller ring on Saturday. Even some of the commentators have got the peak of their careers in the rearview mirror, as former United States President Donald Trump will be commentating on Holyfield’s bout with Vitor Belfort.

Rather than splash the cash to watch these faded warriors recapturing something they left behind decades ago, it is far more inspiring to go back and watch these titans at their peak. Here are the greatest nights of Triller’s veteran sluggers. 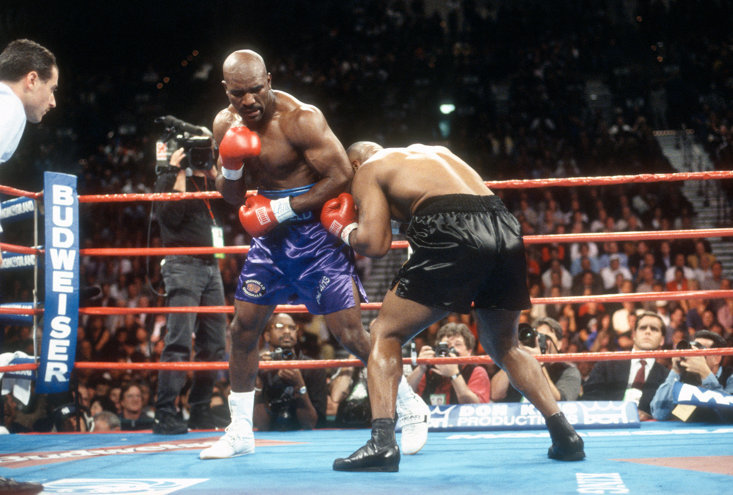 Forget the ‘Bite Fight.’ Before Mike Tyson reminded the world he was truly unhinged, Holyfield reminded the world he was an all-time great heavyweight. ‘Real Deal’ opened as a 25-1 underdog, and was perceived to have lost a step after looking very poor in his previous fight against Bobby Cyz. On the other hand, ‘Iron’ Mike had been imperious since his release from prison, collecting four wins inside the distance and two world titles.

Evander did not just throw the formbook out of the window, he punched it into dust. His smart boxing, brave refusal to be overawed and a smattering of the ‘dark arts’ on the inside frustrated the favourite. Holyfield closed the show with a flurry of unanswered punches in the penultimate round. ‘Commander Vander’ would go on to enter the record books as the only fighter to win the heavyweight championship four times. Tyson would never hold a world title again.

The UFC veteran has enjoyed a number of career highlights. Belfort took the UFC Light Heavyweight title from the great Randy ‘The Natural’ Couture via cuts, blasted out Wanderlei Silva in 44 seconds, and scored the 2013 Knockout Of The Year against Luke Rockhold.

However, his UFC 12 heavyweight tournament win just edges it. During the early days of MMA, fighters would compete several times in one night in order to earn championships. Most impressively, Belfort won the February 1997 tournament by beating Tra Telligman and Scott Ferrozzo in a combined time of exactly two minutes. On this night, ‘The Phenom’ truly arrived in MMA. 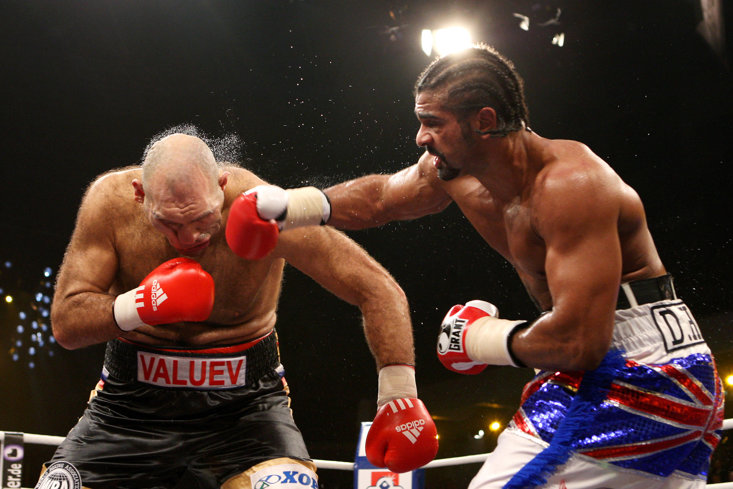 Already a unified cruiserweight champion, the ‘Hayemaker’ was seen as Britain’s greatest heavyweight hope at a time when Wladimir Klitschko ruled the division with utter dominance. It did not quite pan out that way, but Haye proved he belonged in boxing’s glamour decision against Valuev.

Facing the tallest and heaviest champion boxing has ever seen, Haye used clever movement and patient boxing to pick apart the giant, before coming within a whisker of knocking Valuev out in the final minute. Haye never quite scaled these heights again, but on this night he had climbed the mountain.

The moment UFC first crossed over from a fringe-sport viewed with suspicion to a fascinating variation on the fight game that could capture hearts in the same way boxing had. Tito Ortiz’s bitter feud with UFC champion turned WWE star Ken Shamrock would become the talk of combat sport by borrowing heavily from pro wrestling.

The trash talk and running storyline of Ortiz taking out members of Shamrock’s Lion’s Den training group left anticipation at fever pitch when the pair finally met at UFC 40: Vendetta. Ortiz weathered an early Shamrock storm, nearly being knocked out early, to dominate proceedings from that point. ‘The Huntington Beach Bad Boy’ wore ‘The World’s Most Dangerous Man’ down before Shamrock’s corner threw the towel in before round 4.

The impact of the fight went far beyond the cage. UFC had tripled their previous PPV buyrate, gained mainstream media coverage, and it has been argued the fight saved the company from bankruptcy. Without Ortiz vs Shamrock I, there might not be a UFC today. The pair would run it back in a pair of rematches, the first breaking the company PPV record again, the second breaking their television rating record. Ortiz won both in the first round. 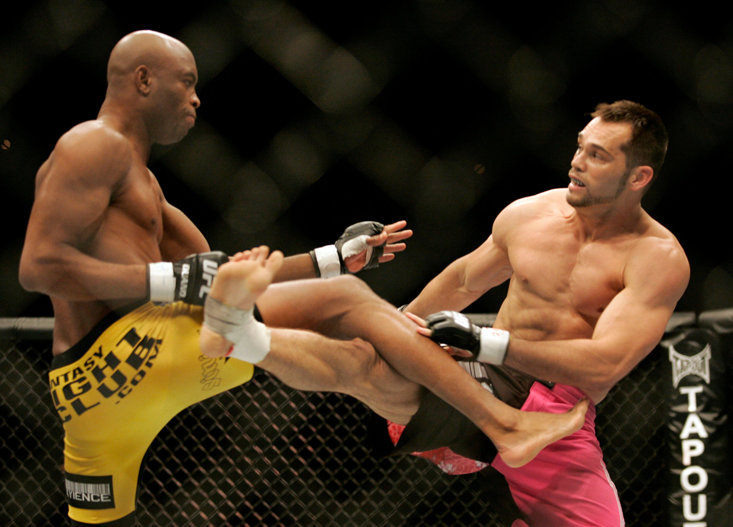 As the fighter with the second-most UFC title defences under his belt, and a highlight reel stacked with spectacular finishes, any number of fights could have gone here. But you never forget your first time, and ‘The Spider’ enjoyed quite the coming out party when he won the UFC Middleweight Championship.

Catching the champion with a brutal knee in the clinch, Silva honed in on Franklin and launched a barrage of kicks and knees. Sensing blood in the water, the Brazilian struck with one final, decisive knee to the skull of Rich Franklin, dethroning the champion and beginning a journey on which he would make history.

x
Suggested Searches:
Manchester United
Liverpool
Manchester City
Marcus Rashford
Premier League
More
boxing
Dillian Whyte To Fight Otto Wallin, Five Boxing Stories You...
Dillian Whyte could face a tough heavyweight test in October, Jake Paul is helping to make a women’s [ ... ]
boxing
Bridge Over The River Why?: WBC Confirms First Bridgerweight...
Boxing has a new world championship in a brand new weight class, as Oscar Rivas and Bryant Jennings [ ... ]
boxing
Crawford vs Porter: Top Welter Scrap Can Cure Boxing Of Its...
WBO welterweight champion Terence Crawford will meet former two-time belt-holder Shawn Porter on 20th [ ... ]
boxing
Tales From The Crypto: Amir Khan Fronts Bizarre Finance Influencer...
You have seen your favourite YouTubers knock out basketball players. You have seen MMA fighters destroy [ ... ]
boxing
Atrocity Exhibition: Boxing Must Stop Encouraging Fighters Like...
Evander Holyfield is no stranger to unedifying ends to a career. ‘The Real Deal’ has reached [ ... ]
boxing
Tyson Fury Shares Career Bucket List, Five Boxing Stories You...
Tyson Fury has mapped out his ideal boxing bucket list, Donald Trump is back and Billy Joe Saunders [ ... ]
boxing
Anthony Joshua's Ferocious Punching Power The Key Against Usyk,...
There’s a little over a fortnight to go until the showdown between WBA, IBF, WBO, and IBO heavyweight [ ... ]
boxing
First Line Of Defence: When The Best Brits Put Their Belts On...
Sunny Edwards was set to defend his IBF Flyweight championship against Jayson Mama on Saturday at the [ ... ]
boxing
When Wladimir Klitschko And ‘The Next Tyson’ Saved The Heavyweight...
Former WBC heavyweight champion ‘The Nigerian Nightmare’ Samuel Peter turns 41 today. Despite [ ... ]
boxing
Oscar Valdez Fighting After Positive Drugs Test Casts Boxing...
WBC super featherweight champion Oscar Valdez has tested positive for the banned substance phentermine [ ... ]
boxing
Lara Slice Puts Warrington Redemption On Ice
Josh Warrington stormed into Headingley to the strains of ‘I Predict A Riot’, but not even [ ... ]
boxing
Triumphant Taylor And Heroic Hughes Highlight Warrington vs...
There is no question that Josh Warrington drew the large and vocal crowd to Headingley, to watch him [ ... ]
boxing
Influencers Need Not Apply: Fury, Joshua and Canelo Lead Boxing’s...
Last weekend, Jake Paul “treated” us to the latest chapter in his boxing odyssey. Next Saturday, [ ... ]
boxing
Josh Warrington Admits Pressure Is On As He Seeks Revenge Against...
Josh Warrington is gearing up for a shot at revenge on Saturday night when he takes on Mauricio Lara [ ... ]
boxing
Undisputed vs Undisputed: A Future Fight Between Serrano And...
Among the YouTubers and gross mismatches on show in Cleveland, Ohio on the Jake Paul vs Tyron Woodley [ ... ]
boxing
A Night At The Circus: Paul Squeaks Past Woodley As Tommy Fury...
Jake Paul moved to 4-0 (3 KOs) last night with a split decision victory over former UFC champion Tyron [ ... ]
boxing
Angelo Dundee: Three Masterpieces From Boxing’s Greatest Trainer
Perhaps the greatest cornerman of all-time, Angelo Dundee guided the careers of sixteen world champions [ ... ]
boxing
Okolie Makes First WBO Defence On Stacked AJ/Usyk Undercard
Lawrence Okolie makes the first defence of his WBO World Cruiserweight Championship as part of a strong [ ... ]
boxing
Pacquiao Eyeing Up Ugas Rematch, Five Boxing Stories You Might...
It might not be the end of Manny Pacquiao’s legendary career just yet, YouTuber Jake Paul is comparing [ ... ]
boxing
Jake Paul vs Tyron Woodley Headlines Intriguing Card That Could...
The circus rolls on as internet personality Jake Paul treats us to his latest professional boxing extravaganza, [ ... ]
boxing
Spence, Crawford Or Porter? What Next For Pacquiao Conquerer...
On just 11 days’ notice, Yordenis Ugas pulled off one of the upsets of the year after beating [ ... ]
boxing
Age Is Just A Number: The Best Boxing Performances By Fighters...
Manny Pacquiao steps into the ring on Saturday (August 21) at the age of 42, hoping to win his unprecedented [ ... ]
boxing
Who Is Yordenis Ugas? The Cuban Olympian Fighting Pacquiao On...
WBA ‘Super’ World Welterweight Champion Yordenis Ugas meets the iconic Manny Pacquiao on [ ... ]
boxing
Pacquiao Wants Mayweather Rematch, Five Boxing Stories You Might...
Manny Pacquiao still wants a chance to avenge his loss to Floyd Mayweather Jr, Kell Brook and Amir Khan [ ... ]
boxing
On This Day In 1995: Mike Tyson Blitzes Peter McNeeley In Just...
Mike Tyson rocks back and forth, chewing his mouthpiece. The Catskills heavyweight always carried the [ ... ]
boxing
Muhammad Ali's Grandson, Nico Ali Walsh, Lands First-Round KO...
Nico Ali Walsh, middleweight boxing prodigy and heir to the great Muhammad Ali, won his first professional [ ... ]
boxing
From Manny Pacquiao To Marvellous Marvin Hagler, Five Of Boxing's...
It’s Friday 13, August and that means it’s International Left Handers Day! In boxing, left [ ... ]
boxing
Who Is Joe Fournier? The Businessman Who Trained Jay-Z And Is...
David Haye has become the latest retired boxer to see dollar signs at the prospect of a comeback, as [ ... ]
boxing
David Haye To Make Ring Return Aged 40, Five Boxing Stories...
David Haye is making a comeback after just three years away, one of the biggest fights of the year has [ ... ]
boxing
The Pressure’s On Smith Ahead Of Battle Of Liverpool With Fowler,...
Eddie Hearn says the huge October 9 card at the M&S Bank Arena in Liverpool, live worldwide on DAZN, [ ... ]