Liverpool can complete a tetrad of Premier League clubs in the pot for the Champions League quarter-final draw when they take on Bayern Munich in Germany tonight.

Manchester United, Manchester City and Tottenham have already booked their spots in the last-8 of Europe’s showcase event, and now it’s up to Liverpool to transform the trio into a quadruple, and if successful, this means that England will have half of the eight representatives in the quarter-finals for the first time in a while.

So, when was the last time this happened?

Last season two English clubs were present in the last-8. Liverpool overcame rivals Man City 5-1 on aggregate, before edging out Roma 7-6 in the semi-finals, only to lose out to Real Madrid in the showpiece spectacle.

Leicester were the only English representatives in 2016/17, where they lost to Atletico Madrid, while City beat PSG 3-2 at the same stage in 2015/16 but were then narrowly defeated 1-0 by eventual winners Real Madrid. The 2014/15 and 2012/13 were both barren years for Premier League teams, while Chelsea and Man Utd both featured in the in-between season.

In 2012 Chelsea axed Andre Villas-Boas after a 3-1 first-leg defeat to Napoli in the round-of-16. In came interim boss Roberto Di Matteo who conjured up a second-leg comeback, followed by victories over Benfica and Barcelona, then that penalty shoot-out success in the Final. They won the FA Cup too. 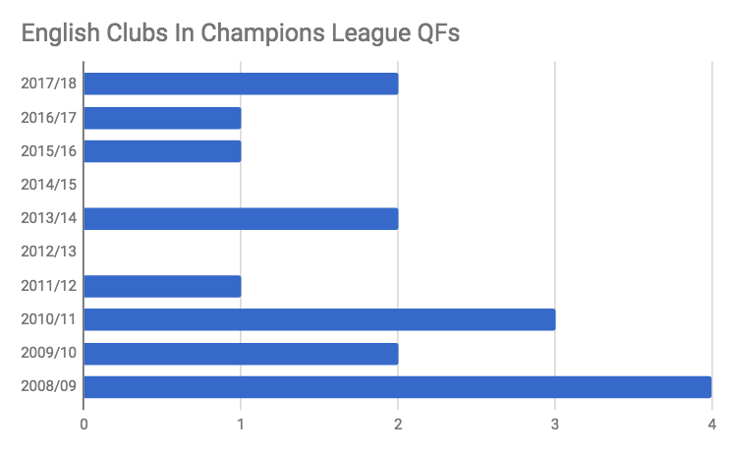 The 2010/11 season was the last time three English clubs took part in the quarter-finals; Tottenham were blown away by Real Madrid, while Man Utd knocked out Chelsea, then Schalke, but were outclassed by Barcelona in the Final.

Both of Arsenal and United were defeated in the 2009/10 quarter-finals, meaning it now dates back 10 years to 2008/9 to when four Premier League clubs were present in at this stage of the tournament: Arsenal, Man Utd, Liverpool, and Chelsea.

Three of which ventured into the semi-finals, with Liverpool the exception following a thrilling 7-5 aggregate loss to Chelsea who then lost to Barcelona. The Catalan club would go on to lift the trophy after a convincing 2-0 win over Fergie’s Red Devils who had previously beaten Arsenal.

Is this the season Spain’s dominance comes to an end? A club from La Liga has finished the season as the premier team in Europe in each of the last five seasons, four of which have been won by Real Madrid, and the other by Barcelona.

However, Real are now unable to make it four wins on the spin, after they were surprisingly dumped out by Ajax last week. If Barcelona boot out Lyon tonight then there will only one Spanish side in the quarter-finals were the first time since 2010.

But, if Ernesto Valverde’s men were to suffer a shock upset at the hands of their French opponent’s then there will be no Spanish representatives in the last-8 for first time since 2005.