Manchester City emerged with maximum points from their supposedly tricky clashes against Tottenham and Manchester United. Pep Guardiola’s troops now need to win their remaining three games to successfully fend off Liverpool and retain the Premier League title, although the club faces a potential banana skin on Sunday when they visit in-form Burnley at Turf Moor.

To add a bit of spice to proceedings Clarets boss Sean Dyche has revealed that he supported Liverpool as a kid, which got us thinking:

Which clubs Premier League managers follow when they were younger?

As you can imagine, the results are a mixed bag. While some are obvious, others are startling, whereas a handful proved to be too difficult to unearth...

Pep Guardiola played for Barcelona C, Barcelona B, then sported the senior shirt on just short of 400 occasions, winning a host of trophies in the process. Pep’s first taste of management was with Barcelona B, before he got the call-up to manage the first team. The Spaniard proceeded to win 14 trophies in four years. Simply staggering.

The Liverpool boss cheered on home town side VfB Stuttgart as a youngster. He had a trial with his boyhood team but failed to make the cut. The German actually had his sights set on becoming a doctor, however it was not to be as he jumped into the world of football with Mainz, with whom he would later manage.

Ole Gunnar Solskjaer is a Manchester United legend. The Norwegian spent a hugely successful 11 years at the club, lifting a plethora of honours, including the Champions League after bagging THAT last-gasp winner. In December he returned as interim manager, and after a stunning impact his appointment was made permanent in March.

However, you may be surprised to learn that Solskjaer was actually a big Liverpool fan growing up in an era in which the Reds dominated English football. Although he did the Merseyside no favours as Man Utd sunk to a derby day defeat to Man City earlier this week… Maurizio Sarri grew up in Naples and became a banker in the city, a job he juggled with amateur football. After numerous managerial spells in the Italian lower leagues, Sarri would go on to manage home town club Napoli, dazzling domestically and in Europe under his Sarri-ball philosophy, although silverware eluded him. He’s now bidding to taste success in the Europa League with current club Chelsea.

Yes, you read that correctly. Brendan Rodgers was a Sheffield Wednesday fan. The Northern Irishman did of course support Celtic, whom he would go on to lead to a double-treble as manager before a controversial return to the Premier League, but he also had a soft spot for the Owls because his cousin, fellow manager Nigel Worthington, spent 10 years at the club during his playing career.

Croydon-born Roy Hodgson was a boyhood Crystal Palace fan who represented the club at youth level, then returned as manager in September 2017 when the club were pointless and goalless. Hodgson, 72, guided the Eagles to safety and earlier this season became the oldest manager in Premier League history

The Spaniard grew up in the Spanish capital and was first taken to the Bernabeu by his mum, a Real Madrid fan. He would go on to play in the club’s academy, and at the age of 26 joined their coaching staff. Benitez won three league titles at the helm of Castilla B, and returned to Madrid in 2015 to manage the first team, in what turned out to be an ill-fated seven-month spell. 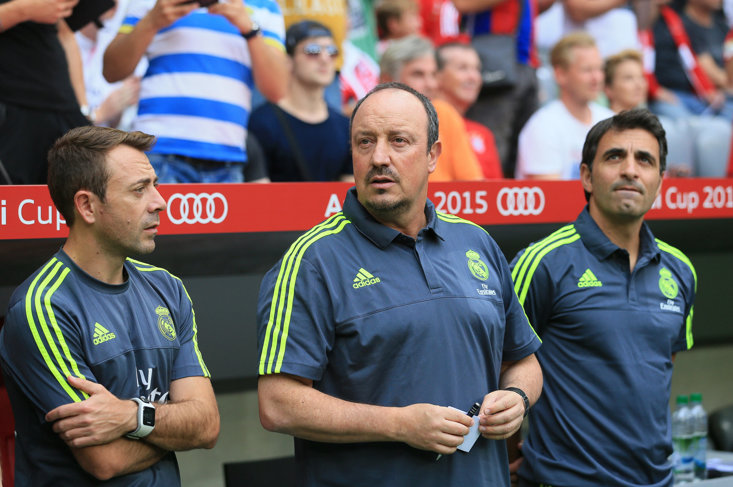 Eddie Howe may be synonymous with Bournemouth, with whom he incredibly led from League Two to the Premier League, but as a boy his was a passionate Everton supporter, although his very first allegiance was to Watford...

“I was a passionate Everton fan as a kid. I lived near Watford – born in Amersham, raised in Chesham – so I used to watch Watford,” Howe told the Liverpool Echo.

“Watford were playing in the 1984 Cup final, so I turned it on being a Watford fan, and then watched the game and there was just something that said I have to support the blue team.

“It was the kit, the name... and that was it. I was hooked. That inspired my following of them and I followed them ever since.”

The Sheffield-born veteran boss, 70, realised his dream of managing the Blades in 1999. He was at the helm for eight years, during which he won promotion to the Premier League, and reached the semi-finals of both domestic cup competitions.

Fulham’s interim boss was a product of the FA School of Excellence, before being snapped up by local side Charlton, where his all action displays caught the attention of Chelsea, followed by spells at Newcastle, West Ham, Tottenham and finally Fulham. Parker also captain England against Holland in 2012.

Now things start to get a bit patchy…

Mauricio Pochettino’s first club was Newell’s Old Boys, and the story is brilliant. The club’s youth development coach, a certain Marcelo Bielsa, turned up at a young Pochettino’s house in the early hours of the morning...

“One night, at one in the morning, he came to my house, knocked on the door and wanted to see a 13-year-old boy,” Mauricio Pochettino previously told ESPN.

“They tried to convince my parents to let me travel 200km, to Rosario, which was the distance from my city, Murphy.

“They wanted to see my legs! At this time of the morning, they would have to be a little… they had to make my parents dream. Then they said: ‘these legs look like those of a very good player’. That was a good lie, no bad intentions.”

Spent 13 years as a Tottenham player, and a further 14 years on the club’s coaching staff. However, while Hughton has previously admitted that he never had a concrete allegiance to any team growing up, he admitted that he was ‘very much a local West Ham lad’.

Grew up in Basque country and spent his early years at Real Sociedad.

The quintet are proving to be too elusive.