The Premier League now takes its final breather before the riveting run-in through to the end of the season as the international break takes centre stage for a couple of weeks.

Managers can use the brief pause in play to take stock of everything ahead of the ‘business’ end of the campaign’; whether that’s fighting it out for the title, bidding to secure a top-4 or top-10 finish, or securing safety, there’s always something to play for.

So far this season we’ve witnessed five managerial changes - two of which were administered by Fulham - while back in December Man Utd decided to ditch Jose Mourinho, and replace him with Ole Gunnar Solskjaer on an interim basis.

Unless you’ve been living under a rock, you’ll be well aware that Solskjaer has gone on to enjoy a superb run of form at the helm; registering 32 points from 13 Premier League matches, which equates to 2.46 points per game (PPG). As a result, United have stormed into the mix for a top-four finish.

Mourinho could only record 26 points from 17 games from the start of the season through to his eventual departure.

So, how does Solskjaer’s league record, to date, compare with the rest of the top-six managers since he was appointed on December 19th?

It probably won’t surprise you that Solskjaer has amassed more points in this time than any other Premier League manager, even Pep Guardiola.

The quadruple-chasing Man City gaffer, who is looking to become the first boss to win back-to-back titles since Sir Alex Ferguson, has also taken charge of 13 league games since the arrival of Solskjaer; collecting 30 points at 2.3 points PPG. The two managers go head-to-head next month in the eagerly anticipated Manchester Derby, which will be Solskjaer’s first in the dugout. 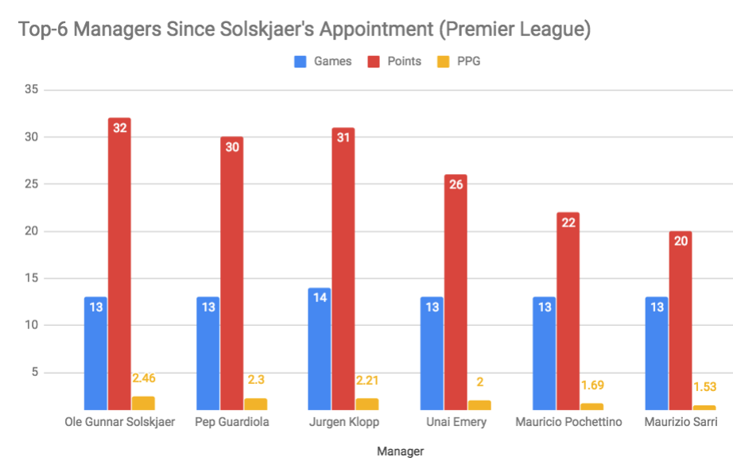 Next in this mini-table of six managers is Liverpool’s Jurgen Klopp. The German has managed one more game (14) than the other handful of managers during the identified timespan, accumulating 31 points at 2.21 PPG. The Reds have only lost once in that period - and all season - although only time will tell whether dropped points against Leicester, West Ham, Everton, and Solskjaer’s United prove costly. At the time of writing Liverpool are two points clear at the summit, albeit having placed a game more.

Unai Emery’s Arsenal have collected 12 more points (60) than at this stage last season in what was Arsene Wenger’s final year at the helm (48), while they are also two places better off in fourth. The Spaniard’s main aim is returning the Gunners to the Champions League, whether that’s via a top-four finish or winning the Europa League, a competition he’s won three times (Sevilla).

In his last 13 top-flight games he’s collected a respectable 26 points, and earlier this month he became the first Premier League boss to beat Solskjaer.

Fifth is Mauricio Pochettino whose Tottenham side were in the title race a few weeks ago, only to then pick up one point from four games, meaning his tally is 22 points from 13 games since Solskjaer was appointed.

Bottom of the pile is the under-fire Sarri. A man who went unbeaten in his opening 12 Premier League games, only to since suffer seven defeats in 18, five of which have come since mid-December, while his troops were booted out of the FA Cup by Solskjaer’s United a month ago.