Football
News
Here's what we know about United's opponents in the Europa League
Jack Porter
13:07, 19 Sep 2019

In May 2017, Manchester United became just the fifth club to win all three major European trophies, with victory over Ajax in Stockholm. A little over two years later, the Red Devils venture into the Europa League once again after a short hiatus when the predominant Champions League was accessible. A sixth-placed finish in the 2018/19 Premier League season for Ole Gunnar Solskjaer’s side means that the UCL’s little sister is on the agenda instead.

In their opening group stage fixture of this year’s competition, United are facing a club formed just eight years prior to that success in Sweden, Kazakhstani side FC Astana.

Formed in 2009, Astana are the winners of the Kazakhstan Professional Football League for the past five straight seasons, coached by Ukrainian manager Roman Hryhorchuk since the beginning of the 2018/19 season.

This is the Blue and Yellows’ seventh consecutive year in UEFA club competition, the highest point in 2015/16 in featuring in a Champions League group featuring Benfica, Atlético Madrid and Galatasaray (the campaign ended winless for Astana). In the Europa League, the club has never managed to progress past the group stage.

Astana is the former name of the Kazakhstan capital, Nur-Sultan, located in the north of the country. The city was renamed in March 2019 in honour of departed leader Nursultan Nazarbayev by his successor Kassym-Jomart Tomayev. FC Astana is located towards the Yesil District of the city.

In 2016, off the pitch, the club gained exposure in throwing their support behind 12-year-old Raiymbek Mergenbaev. Raiymbek developed cerebral palsy after being incorrectly vaccinated as a child, and now requires the constant use of a wheelchair. His mother, Raya, who is herself disabled, has had to raise him as a single parent after his father left the household.

FC Astana began an initiative to encourage food and clothes donations to the family after being alerted to the story by Channel 1 Eurasia. The staff at the club also generated a collection for medical assistance for Raiymbek in China.

Duly, he was also presented with a personalized jersey, as well as being invited to the Astana Arena for match-days.

Now the club is arriving in Manchester for a meeting with the 20-time English champions, three-time European Cup winners.

At Old Trafford in the Group L curtain-raiser, in terms of interesting battles to watch out for, Serbian international and Astana defender Antonio Rukavina has spoken about his side’s chances in Manchester, particularly in coming up against his compatriot and national teammate, the Man United midfielder Nemanja Matic. He said: “I hope we meet Nemanja in Manchester and can have dinner. This is a game in which, first of all, you need to enjoy football.

“It seems to me that any boy who starts playing football wants to play at such a stadium once. It’s hard to say that we will win. But there are always chances. We will have to proceed from tactics and our capabilities. Why not?

“Everything is possible in football. But again, it is important to enjoy this game. Playing at Old Trafford is a great honour for everyone.”

UEFA Europa League
@EuropaLeague
The 2019/20 #UEL group stage draw! 👊
Which games are you excited for?
#UELdraw 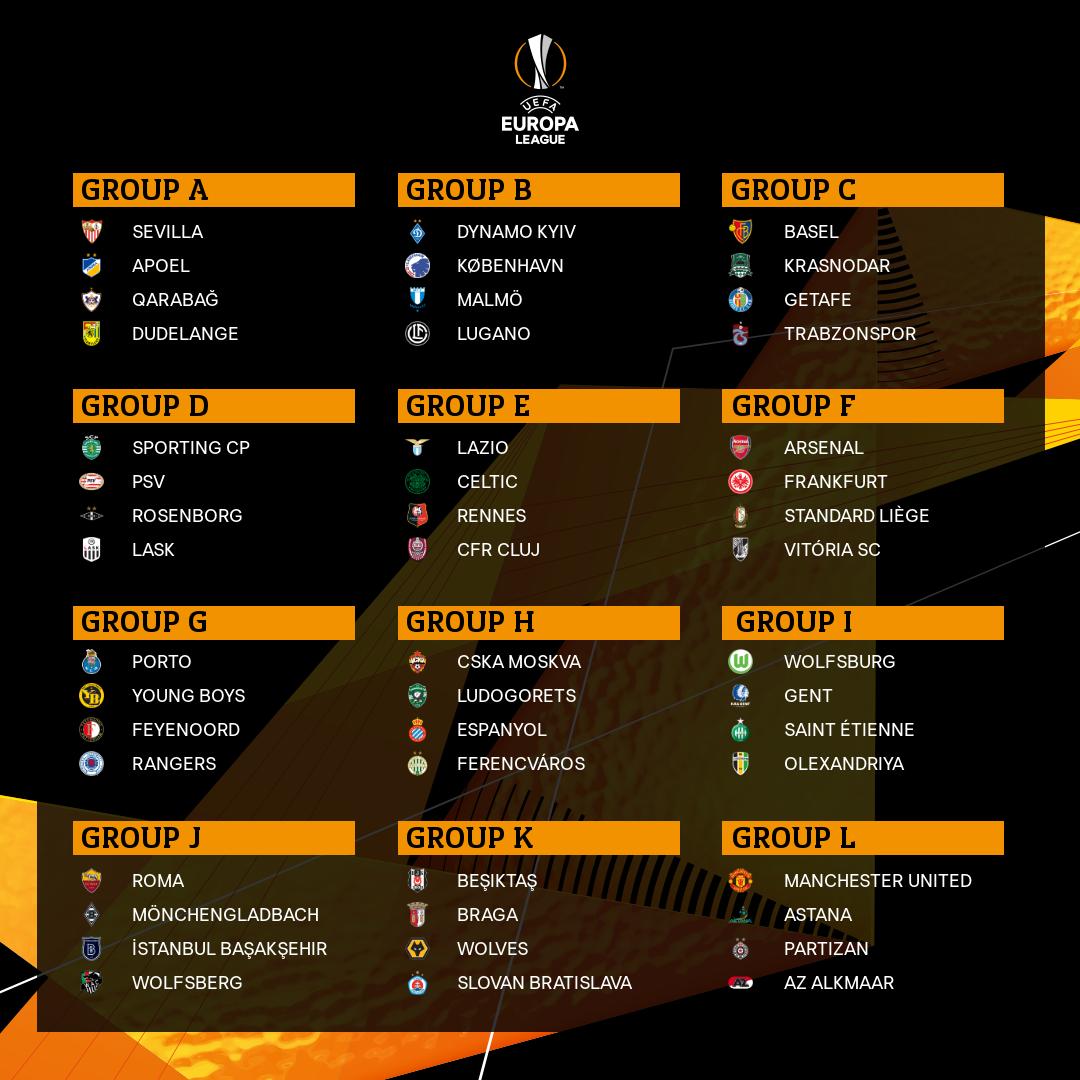 6049
17243
More
football
Rosé For Rodriguez, A Bollocking For Bilic, Five Stories You...
Managers can’t manage masks, fans are finding new ways to hail their heroes, and Jurgen Klopp [ ... ]
football
The Covid Defying Smart Helmet That Could Help Unite Football...
After the longest season in history, a mercifully short reprieve for players to catch their breath has [ ... ]
football
Get An Edge On Your Rivals This Season With The Fantasy Premier...
What are you this year? ‘Lallanas in Pyjamas’? ‘Murder on Zidane's Floor’? [ ... ]
football
Neymar's Handbags, Shy Guy Jose, And Other Football Stories...
Just like that, we’re back in the room. There’s new rules (on and off the pitch), and renewed [ ... ]
football
Celebrating The Return Of The Premier League With Its Best Ever...
After the shortest pre-season on record, even if it has felt to some of us like the longest ever, Premier [ ... ]
football
Lionel Messi Teams Up With Budweiser To Inspire Tomorrow's Footballing...
Lionel Messi, for all you do, this Bud’s for you. We’ve got to admit, it’s got a certain [ ... ]
football
From 007 to 46 Million Followers, Ten Facts You Never Knew About...
Everton finally announced the signing of James Rodriguez on Monday evening, after the Colombian superstar [ ... ]
football
The New Liverpool Book With A Groundbreaking View Of The Shankly...
September should always hold a special place in the hearts and minds of Liverpool Football Club and [ ... ]
football
The Questions We Want Answering After Watching All Or Nothing:...
“You have to be a bunch of bastards!” Annnd with that, we’re hooked. The last day [ ... ]
football
Football History Comes To Life With The Guardian’s Forgotten...
For much of 2020, the general consensus amongst the sporting community has seemingly been the desire [ ... ]
football
Book Review - Close Quarters: An Extraordinary Season On The...
He has been called the luckiest journalist in the world. When award-winning sportswriter Neil Harman [ ... ]
football
Work Out Like A Chelsea Player With The Most Advanced Football...
It claims to be the most advanced football training experience ever - imagine being trained by world-class [ ... ]
football
Blue Moon, Bubbles & Delilah - How Football Clubs Got Their...
Liverpool and Celtic fans both enjoy spine-tingling versions of ‘You’ll Never Walk Alone’ [ ... ]
football
The Lionesses Who Helped Lead The Charge In Lyon's Coupe De...
For the second time in less than a fortnight, Olympique Lyonnais and Paris Saint-Germain faced off in [ ... ]
football
Five Premier League New Boys That Are Set To Take Next Season...
A swift summer transfer window is on the cards, with just 48 days between Premier League seasons due [ ... ]
football
Bobby Robson And The Most Glittering Chapter In Ipswich Town’s...
Few in Ipswich could have predicted what was to come when Bobby Robson replaced Bill McGarry at the [ ... ]
football
How Tearing Down The Twin Towers Destroyed The Magic Of Wembley
On July 26, 1998, plans for a new Wembley were revealed to the world, promising a national stadium [ ... ]
football
Here's To The 2019/20 Premier League Season: Five Moments That...
It all began on August 9, 2019. 353 days later, a fortnight shy of a full entire year, the 28th Premier [ ... ]
football
Why Figo To Madrid Is Still Football's Most Controversial Transfer...
We’ve had Neymar, Sol Campbell and Carlos Tevez but on this day in 2000, Luis Figo completed the [ ... ]
football
Remembering Laurie Cunningham: The Football Pioneer Whose Legacy...
In 2016 the English Heritage scheme erected a blue plaque in Stroud Green, North London to celebrate [ ... ]
football
Book Review - King Eric: Portrait Of The Artist Who Changed...
Leeds. Irwin. £1million. Title. Double. Palace. Kick. Ban. Seagulls. Return. Liverpool. Double. [ ... ]
football
Replacing Rapinoe And Morgan? The Ladies Who Can Light Up The...
Write off 2020. The best thing about it is remembering how good 2019 actually was. One of the undeniable [ ... ]
football
Wembley Woe: When England Lost To Germany At Euro ‘96
In the summer of 1990 England tasted their first ever penalty shootout heartbreak when they went out [ ... ]
football
Get Ready For A Nostalgia-Fest With Italia '90 Podcast Vincerà!
Hosted by Mark Godfrey and running from June 8th to July 8th, Vincerà! is a 24-part podcast series [ ... ]
football
Harry's Heroes, Vinnie Jones And Revenge At The Battle Of San...
When Vinnie Jones started crunching San Marino players left, right and centre, it was clear the friendly [ ... ]
football
Prodigal Talent Of The German Game Is Turning RB Leipzig Into...
This article first appeared in The Sportsman on 07/12/19 What were you doing at the age of 28? If it [ ... ]
football
''I Was Really Wasted'': When Jurgen Klopp Woke Up Hungover...
This article first appeared in The Sportsman on 05/09/19 Anyone watching the Amazon Prime documentary [ ... ]
football
Book Review - Yer Joking Aren't Ya?: The Story Of Middlesbrough's...
In 1997, Middlesbrough Football Club reached the finals of both the League and FA Cup, had the might [ ... ]
football
Carragher's Brilliant Podcast Shows The Greatest Games Are The...
What’s the greatest football game you’ve ever seen?  Jamie Carragher doesn’t [ ... ]
football
Red Bull And The Football Training Centre Of The Future... Today!
It is now 33 years since Red Bull sold its first ever energy drink. Pre-April Fool’s Day 1987 [ ... ]