Tennis
News
The four semi-finalists have never made it to this stage in a Grand Slam
Simon Lillicrap
16:45, 09 Jun 2021

A Russian, a Slovakian, a Czech and a Greek walk into the French Open semi-finals. We are now down to the final four in the female section at Roland Garros, and there have been several surprises to bring us to this stage. Serena Williams was dumped out by Elena Rybakina, Naomi Osaka withdrew and world number one Ashleigh Barty was forced to pull out through injury. This has left us with a fresh-feeling final four, none of whom have reached a Grand Slam semi-final before. But who are they?

More used to shining in the doubles game having won as part of a duo at Wimbledon and the French Open in 2018 and having reached the final this year in Australia, Krejcikova is finally making waves in the singles game. Out of her first 16 qualifying attempts she only made the first round of a Grand Slam event once, but Roland Garros has given her some success.

She reached the fourth round last time around but has done even better on clay this year, as she beat the highly-rated teenager Coco Guaff in the quarter-finals, 7-6, 6-3. She’s had the most difficult run by far, also beating Sloane Stephens and Elina Svitolina on her road to the final four, where she will now face Maria Sakkari.

It was only a matter of time before Sakkari made it into the latter stages of the tournament. The Greek star has been knocking on the door for the past two years and now finally looks as if she could win at Roland Garros. Two fourth-round exits at the Australian Open and the US Open showed plenty of promise in 2020, but she has taken things up a gear this time around.

Her performance against reigning champion Iga Swiatek in the last eight was simply superb as she dismissed the Pole 6-4, 6-4, and if she can replicate that performance she could well get her hands on the trophy. She faces off against Krejcikova at 3.15pm on Thursday for a place in the final. 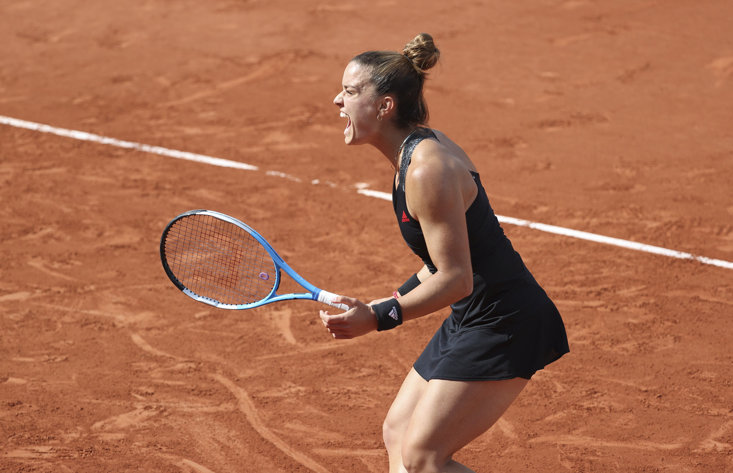 The Russian has finally broken through her quarter-final curse this time around, having made the final eight but lost at three of the last four Australian Opens, Wimbledon in 2016 and the US Open in 2011. She’d also never got past that stage in doubles, which means that this semi-final appearance will be the furthest she has ever been at a Grand Slam tournament.

She had to dig deep in the quarters. Up against Elena Rybakina, who had knocked Williams out in the previous round, she battled back from a set down to win an enthralling encounter 6-7, 6-2, 9-7. It has been somewhat of a resurgence for Pavlychenkova, who reached her career high of 13th in the world 10 years ago but is now contending for a major title for the first time at the age of 29.

She’ll face Tamara Zidansek at 14:00 BST on Thursday for a place in the final.

23-year-old Zidansek has been one of the shock performers at this tournament, having only previously reached the second round of any Grand Slam. On clay this year she has thrived, beating Spain’s Paula Badosa in three sets in the quarter-finals but she has also been handed a fairly kind draw to reach this stage.

At 5ft 6in, she does not boast the physical advantage of some of her rivals and has certainly been the surprise package of this tournament, having gone out in the first round of the Australian Open earlier this year.

She said after reaching the last four: "It feels overwhelming. It's hard to take it in this fast. But I'm just trying to focus on my game, on myself.

Still the rank outsider, it would be a huge shock if she made it to the showpiece event on Saturday. One thing is for certain, no matter who wins, they will be making history this weekend.