Football
News
The Frenchman is only 21 but has already played nearly 90 games in Germany
Elliott Bretland
15:09, 29 Mar 2021

It seems Liverpool’s hunt for a new centre-back could becoming to fruition with highly-rated RB Leipzig defender Ibrahima Konate close to signing for the Reds, according to reports. On Monday morning, news broke that the Merseyside club are ‘finalising’ a deal for the 21-year-old Frenchman.

Konate has gone under the radar somewhat with much of the attention on team-mate Dayot Upamecano who will join Bayern Munich in the summer. However, the youngster has already earned twelve France Under 21 caps, featuring 89 times for Leipzig, who currently sit second in the Bundesliga, since signing from Sochaux in 2017.

The defender has been linked previously with Chelsea, Manchester United and Arsenal though it seems Liverpool will win the race, having turned their attentions to a new centre-back earlier than planned as they deal with a defensive crisis this season. Both Virgil van Dijk and Joe Gomez have missed a large chunk of the campaign, with midfielders Jordan Henderson and Fabinho filling in. Ozan Kabak arrived from Schalke on loan while Ben Davies was signed from Preston but one assumes Konate is being chased as a long-term purchase. 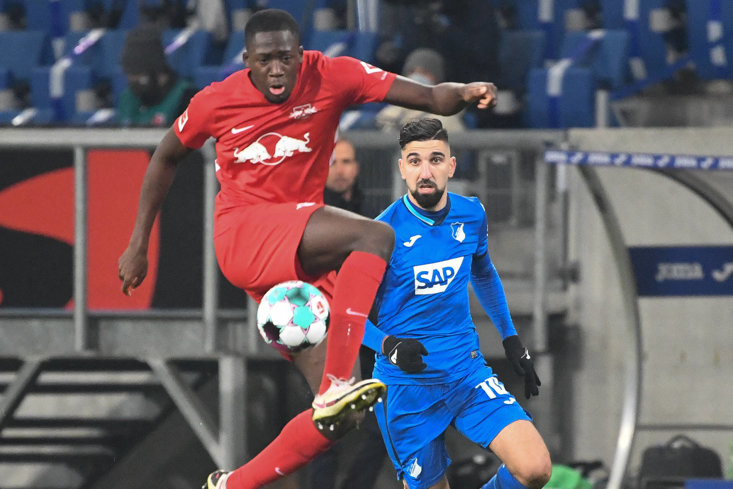 Born in Paris and of Malian descent, the defender came through the ranks at Sochaux and was snapped up by Leipzig on a free transfer having played just 12 professional matches.

“We’ve been watching Ibrahima Konate for some time,” said Ralf Rangnick, Leipzig’s former sporting director back when they signed him in 2017. “He’s a young, highly-gifted player who’ll strengthen our defence. We’re very happy to have been able to bring in this top talent and that Ibrahima can take the next step in his career here.

“He shows great qualities despite being only 18, and we’re convinced he’ll bring us a lot of joy.”

Konate is a towering and imposing centre-back and stands at 6’4”. Despite his tall frame, he is quick across the ground and strong in the tackle. According to journalist Fabrizio Romano, Leipzig will demand £35million to part with Konate, a fair price considering he has been tipped to become one of the best defenders in Europe.

One concern could be, however, his injury record. The defender has managed only 17 league appearances since the start of last season due to a muscle tear and ankle problem. If he can overcome those problems though, he would seriously bolster Liverpool’s backline.

In November, he netted his second-ever Bundesliga goal, finishing a neat set-piece by firing in with his right boot at the near post. Konate will be needed to defend first and foremost but such goals come in handy.

Liverpool and Jurgen Klopp could have another gem on their hands.