Football
News
The Magpies have reached an agreement with Brighton to bring Ashworth to St James' Park
Conor Keane
17:05, 31 May 2022

Newcastle United have finally got their man and it’s someone who will be instrumental in moving the club forward. Dan Ashworth has joined the Magpies as their new sporting director, having been pursued for the role for months.

Ashworth was previously in the same role at fellow Premier League outfit Brighton & Hove Albion, whom he left in February and the Seagulls confirmed he had done so to take up a role at another top-flight club. It has taken time for the sides to come to an agreement regarding compensation for Ashworth’s services - with Brighton reportedly seeking £5 million - but Newcastle finally have their man.

The 51-year-old has a wealth of experience in the game and his arrival at St James’ Park is not only a coup but a signal of intent from the owners to transform the team into challengers for silverware and European football.

Having started his life in football as a hopeful professional, Ashworth was on the books of Norwich City’s academy but a career as a professional didn’t materialise. He left the Canaries for non-league St Leonard’s FC before moving west to the United States where he spent time coaching West Florida Fury. He then came back to England to play for Wisbech Town for a spell until the Autumn of 2000.

Following his retirement from playing he was appointed academy director at Peterborough United in 2000 after previously being their education and welfare officer. He moved on to Cambridge United a year later to take up a position as a centre of excellence director. 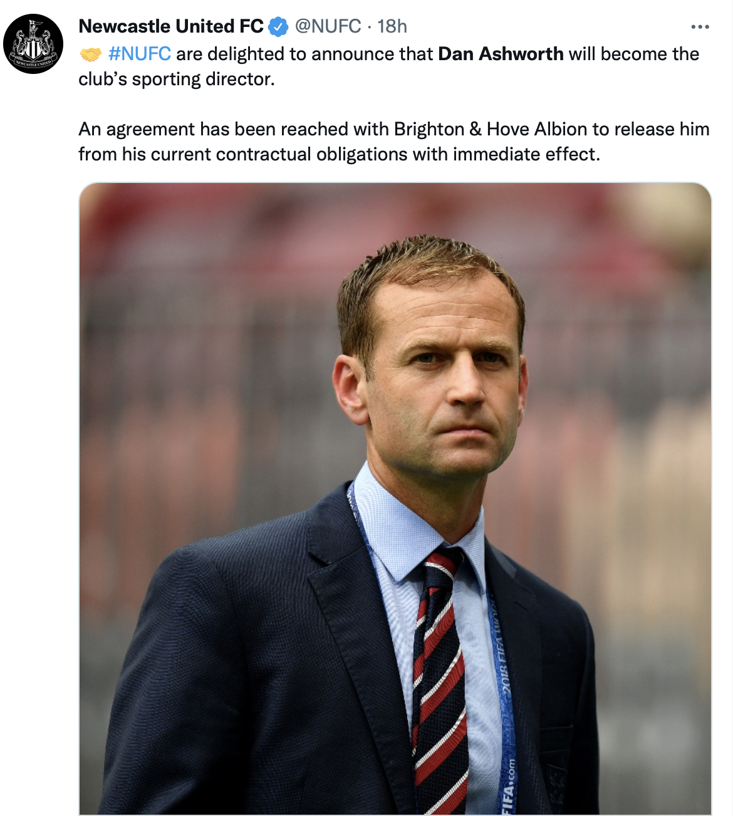 It was in 2004 when Ashworth’s career started to take off. He joined Division 1 side West Bromwich Albion as they were just about to be promoted to the Premier League. His first role was assisting youth team manager Aidy Boothroyd before taking over once Boothroyd left the Baggies. In 2007, he then moved into his now familiar role of sporting and technical director where he had a fruitful five years in the role. Under his watch, players including Graham Dorrans, Youssuf Mulumbu and Jonas Olsson were lured to The Hawthorns.

His fine work in the West Midlands caught the attention of the Football Association whom he joined in September 2012 as director of elite development. Ashworth was one of the creators of the “England DNA” in which the FA set out a plan to help young players gain greater experience to help performances in the international sides.

Ashworth’s role in the FA helped spark the success the international teams have achieved in recent years. He oversaw the women’s team's third-place finish in the 2015 World Cup and run to the semi-finals at the 2017 European Championship. The men’s youth teams won the under-17 and under-20s World Cups as well as the under-19s European Championship. Then the men’s senior team under Gareth Southgate reached the semi-finals of the 2018 World Cup, and Ashworth’s role cannot be overstated in the recent resurgence of the national teams.

He left the FA for Brighton in 2019, helping to establish the club in the Premier League and helping to bring in talented players such as Leandro Trossard and more recently Marc Cucurella. This pedigree of signings will be exciting for Newcastle fans. But Ashworth will have his work cut out for him in taking the Magpies’ summer business to the next level after their most recent transfer window, with the astute additions of midfielder Bruno Guimaraes and defender Dan Burn examples of the steps already made since the Saudi takeover.

This key appointment is another step in the right direction for Newcastle’s promising new era on the pitch, and given Ashworth’s track record you can expect him to conduct some excellent business alongside Eddie Howe ahead of the 2022-23 campaign.