And so it’s over, another Premier League season concluded. Manchester City have become the first team in a decade to retain the title, pipping Liverpool by a single point, and collecting close to 200 points across the past two seasons.

Though the final day was devoid of a top-four battle, or a relegation dog fight, the football fan has been spoilt this season, with a most exhilarating, nail-biting championship race beyond anything ever previously thought imaginable.

Here’s a breakdown of arguably the best player from each club competing who help propel the 2018/19 season into one of the most memorable in recent years.

Bit of a curve ball as there has simply been no better forward player in the Premier League than Raheem Sterling this season, and Aymeric Laporte, Fernandinho, and Sergio Aguero (again) can stake a claim for being a City standout. However, Bernardo’s integrality to Pep Guardiola’s set-up has been illuminated, with the Portuguese stepping niftily into the injury-blighted Kevin de Bruyne’s shoes; tireless, hard-working, and passionate.

The PFA Footballer of the Year and Premier League Player of the Season, as the Dutch defender helped Liverpool keep the most clean sheets in the league.

With a transfer ban looming, losing the brilliant Belgian would be devastating for this side. Took the playmaker award for the season with 15 assists to complement his 16 goals, meaning no other footballer in the top tier has had more of a goal involvement. Has opposing teams at his mercy on his day; simply put, when Hazard ticks, Chelsea ticks.

It’s incredible to think that the Korean missed just eight games this season, despite having to serve his country to two separate tournaments. Though his season finished with ignominy, receiving a straight dismissal for the first time in his career, Son took the mantle from Harry Kane with gusto; between November and February, the 26-year-old forward was involved in a stonking 17 goals.

One of three of the Golden Boot recipients, the Gabonese has often slid under the radar. If Lucas Torreira had kept his temperament in check, however, the competition would have been close.

Luke Shaw may have picked up the Player of the Season award, but Swedish centre-half Lindelöf has stepped up this year, under both managers. The already shaky defensive looked positively kamikaze when he wasn’t in the backline.

Their season may have ended with a whimper, having not truly recovered from that FA Cup exit, but take nothing away from Wolves return to the Premier League, with Nuno Espirito Santo rightfully being elected into the nominees for Manager of the Year.

Conor Coady, Jonny, Wily Boly, Ruben Neves, Matt Doherty, and Diogo Jota have proven they don’t look out of place to go tete a tete with the EPL’s elite, but a tough call gives Raúl Jiménez the spot.

An excellent acquisition in the summer, though Yerry Mina had originally got the hype going after the Colombia’s exploits in the World Cup, it’s the French left-back who has excelled as the season has gone on. Digne has demonstrated both his defensive capabilities - Everton kept eight clean-sheets in their last 11 games - and attacking threat. A player helping to hint that the future for the Toffees is looking rosy under Marco Silva.

The former Ebony Shoe winner has only been with the Foxes since January, but what an impact he has made, as the club looked to dispel memories of the turgid, unimaginative Claude Puel-era. Special mention also for Ben Chilwell, who has been jostling for a top-three left-backs in the league contention, and James Maddison, who has been outstanding since moving from Norwich City.

Nominated for Young Player of the Year, the Irish-turned-Englishman’s stock has risen exponentially, gaining a heft of experience next to Mark Noble who it’s looking increasingly apparent he’s ready to take the mantle (and the captain’s armband if he remains in east London) from. Impressive is an understatement, a maturity belying his 20-years.

A bottom-half finish dampens what has been a good solid year with Javi Gracia, with an evergreen goalkeeper continuing to prove his worth. The 36-year-old (!) Foster has made the third most saves of any keeper in the Premier League this season, and enabled him to overtake Petr Cech for the overall accolade.

Watford Football Club
@WatfordFC
Who better to announce the Players' Player of the Season, than the players themselves...
Congratulations @BenFoster!
82
639

What a talent the young right-back is! The 21-year-old bounced back from being the youngest ever Palace player to be shown a red card all the way back in August, to being arguably the first name on Roy Hodgson’s team-sheet.

His season-long loan deal ended with a brilliant return of 12 goals and seven assists, and has added some much needed relief to Rafa Benitez’ Toon operating on an absolute shoestring budget. Securing him permanently needs to be a must.

Unpredictability has been top of the agenda for the Cherries, but a player who has certainly challenged that with his reliability is midfielder Fraser, who has been involved in a stunning 20 goals for Bournemouth.

The midfielder had his best season for the Clarets’ yet, and the 29-year-old’s particular talents were highlighted in a brilliant eight-match unbeaten run in 2019.

The calamitous first half with Mark Hughes didn’t mark anyone out as particularly special, but under his successor Ralph Hassenhuttl, Redmond has once again demonstrated his imperativeness to Saints. Featuring in every game of the campaign, the 25-year-old scooped the club’s award for Player of the Season.

The sacking of Chris Hughton immediately after the season’s conclusion, as well as Cardiff’s win at Old Trafford on the final day shows how t*ts up the Seagull’s campaign could have really gone. Figures such as Lewis Dunk and Shane Duffy have remained imposing in a squad that needs an overall if they have any serious intention to com

Etheridge has been simply outstanding between the sticks for Cardiff. Based on his displays for the Bluebirds, it wouldn’t be at all surprising to be poached by a remaining Premier League side for the next campaign.

Really trying to find some silver lining for the Cottages, who descend back down into the Championship as swiftly as they arrived. Taking into account Scott Parker allowing Fulham to leave with a big of dignity with a three-match winning streak, could donate the accolade to Ryan Babel.

This was a head-scratcher, so it's kudos to the German centre-back.

OptaJoe
@OptaJoe
2 - 2018-19 (Fulham and Huddersfield) is just the second Premier League campaign in which two teams have been relegated with at least five games remaining after the 1994-95 campaign (Leicester City and Ipswich Town). Drop. 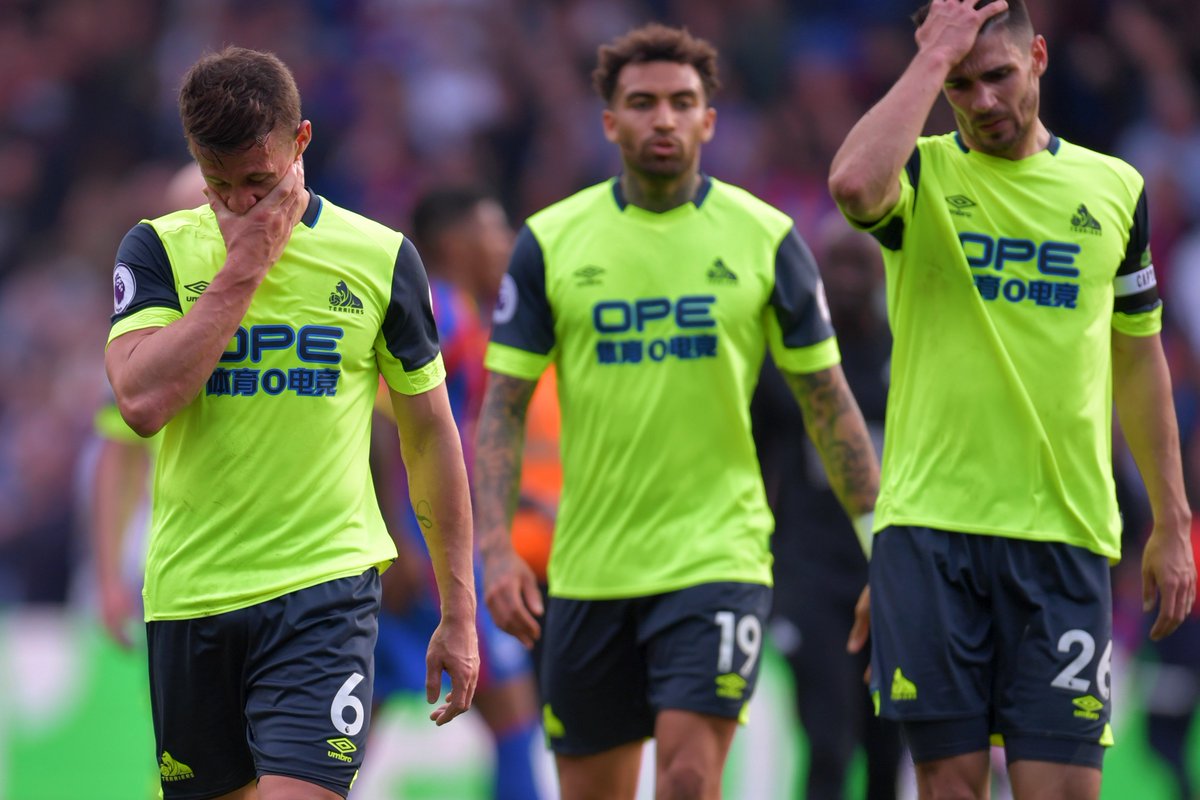 112
218
More
football
Five Premier League New Boys That Are Set To Take Next Season...
A swift summer transfer window is on the cards, with just 48 days between Premier League seasons due [ ... ]
football
Bobby Robson And The Most Glittering Chapter In Ipswich Town’s...
Few in Ipswich could have predicted what was to come when Bobby Robson replaced Bill McGarry at the [ ... ]
football
How Tearing Down The Twin Towers Destroyed The Magic Of Wembley
On July 26, 1998, plans for a new Wembley were revealed to the world, promising a national stadium [ ... ]
football
Here's To The 2019/20 Premier League Season: Five Moments That...
It all began on August 9, 2019. 353 days later, a fortnight shy of a full entire year, the 28th Premier [ ... ]
football
Why Figo To Madrid Is Still Football's Most Controversial Transfer...
We’ve had Neymar, Sol Campbell and Carlos Tevez but on this day in 2000, Luis Figo completed the [ ... ]
football
Remembering Laurie Cunningham: The Football Pioneer Whose Legacy...
In 2016 the English Heritage scheme erected a blue plaque in Stroud Green, North London to celebrate [ ... ]
football
Book Review - King Eric: Portrait Of The Artist Who Changed...
Leeds. Irwin. £1million. Title. Double. Palace. Kick. Ban. Seagulls. Return. Liverpool. Double. [ ... ]
football
Replacing Rapinoe And Morgan? The Ladies Who Can Light Up The...
Write off 2020. The best thing about it is remembering how good 2019 actually was. One of the undeniable [ ... ]
football
Wembley Woe: When England Lost To Germany At Euro ‘96
In the summer of 1990 England tasted their first ever penalty shootout heartbreak when they went out [ ... ]
football
Get Ready For A Nostalgia-Fest With Italia '90 Podcast Vincerà!
Hosted by Mark Godfrey and running from June 8th to July 8th, Vincerà! is a 24-part podcast series [ ... ]
football
Harry's Heroes, Vinnie Jones And Revenge At The Battle Of San...
When Vinnie Jones started crunching San Marino players left, right and centre, it was clear the friendly [ ... ]
football
Prodigal Talent Of The German Game Is Turning RB Leipzig Into...
This article first appeared in The Sportsman on 07/12/19 What were you doing at the age of 28? If it [ ... ]
football
''I Was Really Wasted'': When Jurgen Klopp Woke Up Hungover...
This article first appeared in The Sportsman on 05/09/19 Anyone watching the Amazon Prime documentary [ ... ]
football
Book Review - Yer Joking Aren't Ya?: The Story Of Middlesbrough's...
In 1997, Middlesbrough Football Club reached the finals of both the League and FA Cup, had the might [ ... ]
football
Carragher's Brilliant Podcast Shows The Greatest Games Are The...
What’s the greatest football game you’ve ever seen?  Jamie Carragher doesn’t [ ... ]
football
Red Bull And The Football Training Centre Of The Future... Today!
It is now 33 years since Red Bull sold its first ever energy drink. Pre-April Fool’s Day 1987 [ ... ]
football
On This Day Messi's Barcelona Tally Hits 500 In El Clásico Triumph
If you’re going to hit a milestone, and one that no one in your club’s illustrious history [ ... ]
football
The Secret Behind The Success Of Lineker, Shearer And Wright's...
The unavoidable hiatus to the broadcast of the BBC’s flagship football programme will not deny [ ... ]
football
Neymar Jr... Junior! Santos Like The Look Of Ronaldo-Imitating...
On March 7 2009, a slightly-built 17-year-old from Mogi das Cruzes, São Paulo, walked out onto [ ... ]
football
Business As Usual: A Beginners Guide To The Belarus Premier...
If you’re going out of your mind without your football fix, well we’re sorry you just haven’t [ ... ]
football
Why June 30 Could Be D-Day For The Fate Of Premier League Season
England captain Harry Kane has added his voice to the growing calls for the Premier League season to [ ... ]
football
You Heard It Here First - Brescia's Sandro Tonali Is Italy's...
Since winning the World Cup in 2006, it has been turbulent time on the international stage for Italy. [ ... ]
football
A Reunion With Ancelotti Could Resurrect Rodriguez's Stuttering...
No club chews up and spits out world class players quite like Real Madrid. Yet, their sense of entitlement, [ ... ]
football
'Quickly Kevin' Is The 90s Football Nostalgia Podcast To Beat...
While the majority of sports podcasts scramble to fill the minutes within the disruption of the [ ... ]
football
Where Did It All Go Wrong For Phil Neville And The Lionesses?
Winning, Phil Neville recently said at the SheBelieves Cup, is what would bring England’s women [ ... ]
football
''Drop A Few Hand Grenades'' Keegan's Advice To Scholesy The...
A packed out Wembley roared like one of those indomitable Three Lions to greet England’s new messiah. [ ... ]
football
Rise Of The Couch Coach: Coronavirus Causes 119% Surge In Football...
Thousands of us are flocking to virtual reality and gaming to help fill the void of no live football, [ ... ]
football
Review: Diego Maradona - Drop Yourself Into The Great's Chaotic...
When Diego Armando Maradona arrived at Napoli in 1984 for a world-record fee, the entire city ground [ ... ]
football
Arsenal's Tough Choice - Is Donyell Malen The Ying To Aubameyang?
Arsenal’s inability to manage the contractual situations of their biggest stars has plagued them [ ... ]
football
Robbie Fowler Is Making His Mark As A Manager With Brisbane...
The curtains came down on one of the last bastions of football standing in 2020 this week. Before the [ ... ]
This website uses cookies
Cookies help us and our partners provide statistics. By browsing this website, you consent to the use of cookies in accordance with our Privacy Policy and Cookies Policy.
Accept & Close