It wasn’t meant to work out like this. David Beckham, one of the most famous sportsmen on the planet, invested £15M to create his own franchise in the popular hotspot of Miami. Twelve games into the new MLS season they lie bottom of the Eastern Conference with two wins to their name and Phil Neville is under a huge pressure already as their boss.

"Twenty-three games is the games we've got left, twenty-three cup finals,” Neville said in one of the more bizarre footballing quotes of 2021 and when questioned on Miami’s established owners he was equally as bullish.

"I feel their full support - I always have done," he said. "They don't need to tell me about their concerns because I have the same concerns. I've been in football long enough and I know the consequences - that's no problem to me. We're doing everything in our power, we just need better performances on the field.

"I've got great responsibility and I'm accountable for everything that I do. We're on a run at the moment that puts me under pressure."

The former Lionesses manager isn’t wrong, but the spotlight has intensified since the 5-0 home defeat to New England and now questions are being asked of his managerial ability. Rightly so, he has absolutely no first team club managerial experience prior to taking this position and the difference between club and international management is absolutely huge.

With England’s Lionesses he boasted one of the strongest squads in the world, winning the SheBelieves Cup victory in 2019 and fourth place at the World Cup later the same year, but even that ‘success’ was followed by a downturn in form that led to his eventual departure.

His managerial experience in men’s club football is miniscule compared to others in the division. He has a spell as assistant coach for England’s U21s and coached at Manchester United and Valencia, but as a manager he has not achieved anything in the men’s game. That isn’t a jibe, it is a fact. 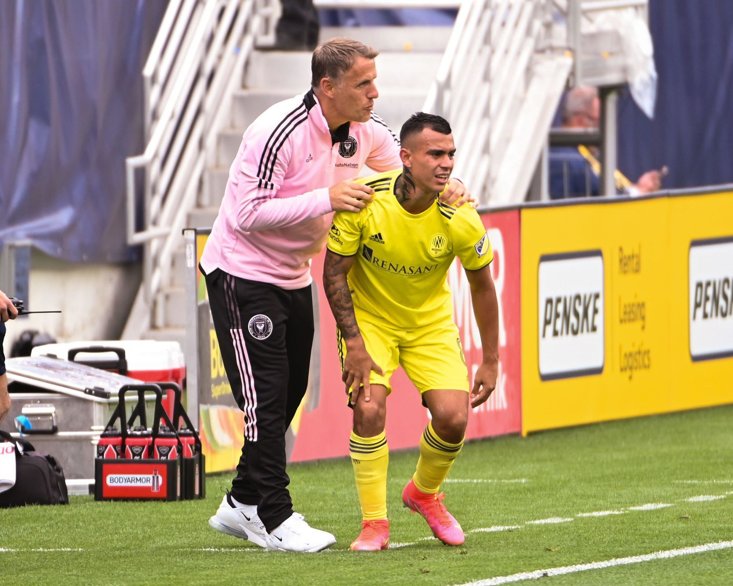 The squad on paper at his disposal seems like an average one for the MLS. Gonzalo Higuain is leading the line and has five goals to his name this term but in terms of efficiency, work is needed. Inter Miami had 15 shots in their latest defeat, with just one of them testing the opposition’s goalkeeper, although they did hit the bar twice.

Gonzalo’s brother Federico is also an aging name in the side, along with World Cup winner Blaise Matuidi and Ryan Shawcross, who brings Premier League experience from Stoke City. There is clearly an abundance of leaders and knowledgeable players in this side, which begs the question, are they simply not good enough anymore?

Elsewhere, players such as attacking midfielder Rodolfo Pizarro have reached their peak, Scot Lewis Morgan is a talented 24-year-old from Celtic and Victor Ulloa is another talented Mexican, but they don’t seem to be clicking under Neville to date.

He is still learning his way in the game and seems to have been given a squad that is lacking pace and cohesive attacking ability, but as a former defender, some of the awful displays we have seen in recent weeks are inexcusable.

Another former Manchester United player Gabriel Heinze has already suffered the ignominy of being sacked at Atlanta United, and if things don’t improve quickly, soon Neville will be out of a job as well.