It might well have been a headline from 2019. That famous obituary we all know so well, written after the mock ‘death’ of English cricket in 1882 when Australia first triumphed at The Oval: ‘The body will be cremated, and the ashes taken to Australia.’

The rivalry, and even the name ‘the Ashes’, was born. A century and a half on, defeats to no other team prompt the same degree of English soul-searching, as losing to the Baggy Green inspires.

No, it wasn’t enough to stop play for bad light, but a darkness started to descend over Old Trafford as the tail-end’s resistance crumbled on Sunday evening. There are serious questions for the ECB to answer now that the little urn is staying Down Under.

But here’s the good news - England are the newly-crowned specialists at bouncing back from disaster. It’s impossible to fully appreciate this summer’s World Cup triumph without looking back to 2015 and that most humiliating of defeats against New Zealand.

What followed was a conscious decision to embrace Eoin Morgan’s swashbuckling strategy, to prioritise ODI cricket, and to replace Peter Moores with Trevor Bayliss. Is the same possible with the Test format? Can England just ‘decide’ to become good at Tests again? Well, coincidentally, 2015 also marked a nadir for Australia.

When they suffered yet another embarrassment on English soil – the low point coming as they were sent packing for 60 all out at Trent Bridge – they embarked on a plan to right their own wrongs.

Ashes series aren’t won by accident. Australia’s problems with the moving ball led to the decision to introduce the Dukes ball for some Sheffield Shield matches, to better prepare players for batting in England.

More recently, Josh Hazlewood was left out of the World Cup squad, despite protesting that he had recovered from the back injury he suffered in the New Year, so he could be well-rested for the start of the Ashes. After missing out at Edgbaston, he took three wickets Lord’s, nine at Headingley, and six at Old Trafford.

Instead of rolling over outclassed English counties in meaningless warm-up matches, Australia’s full squad played each other so they could all get used to the conditions.

Where do England go from here?

As for England, one of the most obvious problems that could, in theory, be addressed straight away next season is the fact that their players so rarely play more than a day’s cricket.

In almost five years, Joe Root has played nine County Championship matches. Since the summer of 2017, Jason Roy, who arguably needs a few four-day games under his belt the most, has featured in seven.

Cricket Australia
@CricketAus
Our Aussies come out on top in another gripping #Ashes contest! The urn has been retained, but a series win remains up for grabs at The Oval! #CmonAussie 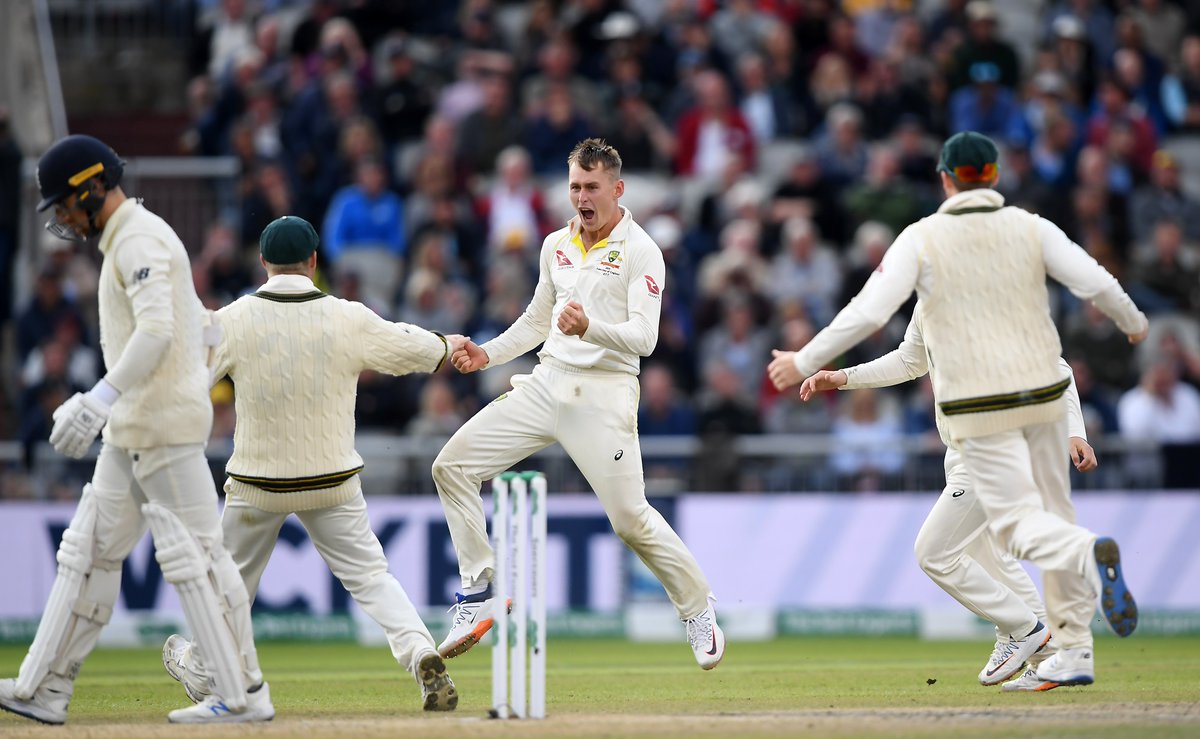 If it is accepted that the Roy experiment has failed, wherever he bats in the order, then Warwickshire’s Dom Sibley is no doubt the next candidate to make the step up. The right-hander hit a double century against Kent last month and has a first-class career average of 38.6.

There are no guarantees it will work. Rory Burns, probably the County Championship’s best batsman, has found international cricket difficult, bar one or two impressive innings. The Surrey opener has done enough to keep his place, but so had Keaton Jennings in his early days. It is a situation that will continue to be monitored going forward.

Yet England must find another batsman from somewhere. They have been dismissed for double figures twice in six weeks, first against Ireland and latterly against Australia. Their total of 67 was their lowest Ashes score since 1948 and their 10th lowest of all-time against any opponent.

With that in mind, they have to persist with five batsmen, a wicketkeeper-batsman, an all-rounder, and four bowlers. At the same time, that makes it difficult for Ben Foakes to come back into the fold.

The ECB have grown tired of the dilemma regarding who opens, much like the public at large. In the selectors’ defence, it looks increasingly like there will be no quick fix and systematic changes will instead be needed.

They intend to appoint another coach who will oversee all formats. That, in itself, will raise eyebrows. They might start by seeking one who firstly, knows which county each player represents. Bayliss’ obliviousness in that regard was reportedly met with astonishment by new call-ups.

The departing coach seems non-plussed at the mixed legacy he leaves behind, though a kinder way of putting it would be to say he looks exhausted by a gruelling schedule with no let-ups for the staff.

‘Who did we beat? England!’ screeched the Aussies as they celebrated on the outfield. ‘How did we do it? Easy!’

Thank God it was easy, or else nothing would ever change.

Bharat Sundaresan
@beastieboy07
And the celebration continues post the Ashes retention with a little message for England @cricbuzz #Ashes19 #ashes #engvaus
206
1622
x
Suggested Searches:
Tyson Fury
Manchester United
Marcus Rashford
Lewis Hamilton
F1
Air Jordan
More
cricket
Weather No Excuse, England Must Learn From Woeful Batting Performance...
How quickly things can change. England’s 227 run win in the First Test v India feels like a lifetime [ ... ]
cricket
Why A Massive Fourth Test Against India Could Define England's...
England’s whole year might well ride on the outcome of Thursday’s Fourth Test against India. [ ... ]
cricket
Brittle England Beaten Inside Two Days As India Survive The...
It was one of the most chaotic days of Test cricket ever but by shortly after tea on day two in Ahmedabad [ ... ]
cricket
Sidebottom Wants To See Both Broad And Anderson Play Third Test...
Former England bowler Ryan Sidebottom says England ought to select both Stuart Broad and Jimmy Anderson [ ... ]
cricket
The Hundred Can Help Revolutionise Women’s Cricket And Inspire...
The long-awaited The Hundred competition is set to revolutionise cricket and will finally kick off this [ ... ]
cricket
Should Test Cricket Lose The Toss After India's Battering Of...
England have nobody to blame but themselves for the manner of their 317-run mauling at the hands of [ ... ]
cricket
Sidebottom Hails ''Fantastic'' Root And ''Stunning'' Anderson...
Ryan Sidebottom has heaped praise on both Jimmy Anderson and captain Joe Root following England’s [ ... ]
cricket
Fantastic Jimmy Anderson Wraps Up A Statement England Win In...
England wrapped up a dominant First Test win over India on Tuesday, with Jimmy Anderson collecting three [ ... ]
cricket
100 Up! Joe Root's Timely Form Could Be The Difference For England...
He is the baby-faced batsman who slotted into England’s line-up in India in 2012-13 and immediately [ ... ]
cricket
Tailenders Is The Easy-Listening Pod That Takes An Alternative...
At the moment, we’re all enamoured with cricket, thanks to India digging in and out-saucing the [ ... ]
cricket
The New Book Shining A Light On The Biggest Scandal In Cricket...
It has been nine years since the News of the World ceased publication. Nine years. Doesn’t time [ ... ]
cricket
How Botham And England Revived The Spirits Of A Nation At The...
In the summer of 1981 a combination of spiralling unemployment and racial tension had led to riots in [ ... ]
cricket
Ben Stokes Inspires England Victory In Five-Day Test Classic
This was five-day test match cricket at its finest. Ben Stokes took the final three wickets on Tuesday [ ... ]
cricket
Batting Legend Tendulkar Warns ICC Five-Day Tests ''Should Not...
If you’re looking for a cricket batting record, odds on Sachin Tendulkar probably owns it. The [ ... ]
cricket
England Head To South Africa Test In Search Of Answers And A...
England end a historic 2019 by taking on South Africa in the First Test in Centurion this week. But [ ... ]
cricket
England World Cup Winner Moeen Ali's Conscious Uncoupling From...
“I just want to get that buzz back”. England’s Moeen Ali has continued to put [ ... ]
cricket
England Fail To Win A Test Series In A Calendar Year For First...
England have lost another Test series in 2019, which brings to a close a difficult 12 months that has [ ... ]
cricket
Joe Root Double Century Gives England A Glimmer Of Hope Against...
Joe Root hit a stunning double century to give England a slight hope of victory against New Zealand [ ... ]
cricket
Pope Steps Up After Baffling Selection Leaves England Short...
It is ever difficult to predict exactly what will unfold when England go on tour. Ollie Pope, a man [ ... ]
cricket
Book Review - Ben Stokes: On Fire
Like rugby, cricket fancies itself as a bit of a proving ground for leadership and performance techniques, [ ... ]
cricket
Ben Stokes Throws His Weight Behind ''England's Best'' Joe Root
Ben Stokes has leapt to the defence of under-fire England Test captain Joe Root following the heavy [ ... ]
cricket
The Time Has Come For Joe Root To Step Down As Captain And Focus...
Joe Root loves a soft dismissal these days.  Should England decide to move him aside as captain [ ... ]
cricket
Steve Smith's Welsh Fire To Face Oval Invincibles In First Game...
Steve Smith and Jonny Bairstow will clash with Jason Roy and Sam Curran in the world’s first-ever [ ... ]
cricket
England's 'New Era' Gets Off To Worst Possible Start Against...
England's 'new era' under Chris Silverwood got off to a humiliating start with a huge innings [ ... ]
cricket
Why England's T20 Triumph Over New Zealand Matters More Than...
There could not have been a more fitting antidote to the slightly subdued atmosphere surrounding England’s [ ... ]
cricket
Silverwood Over Kirsten Is The Right Choice For England's New...
England have confirmed the appointment of Chris Silverwood as their new head coach to Trevor Bayliss, [ ... ]
cricket
Five Things That Prove Steve Smith Ain't Perfect
Steve Smith. The best batsman in the world and seemingly impossible to get out from an English point [ ... ]
cricket
Manchester In The Rain: Five Things To Do When The Ashes Is...
Ah, Manchester. The proud home of The Sportsman is known throughout the world for its music, sport and [ ... ]
cricket
Ashes Hero Ben Stokes Must Be Considered Test Cricket's Best...
With every switch-hit, Ben Stokes eclipsed Botham of ’81. In the process, the third Ashes Test [ ... ]
cricket
England’s Lion Heart Jack Leach Is Granted Free Glasses For...
Specsavers have made good on Ben Stokes’ request to grant Jack Leach free glasses for life after [ ... ]