With the curtains drawn on the Premier League season and the trophy firmly placed in Manchester City’s ever-expanding trophy cabinet, we can now look back and digest the statistics, facts, and figures from the season. One of the standout statistical quirks is the fact that there were more away wins than in any other 38 game Premier League season.

The 2018/19 season saw 129 victories on the road, compared to just 107 the season before. So why was this the case? Well firstly we must look to the top of the table and the complete dominance of Manchester City and Liverpool. Those two clubs won a combined 60 games over the league campaign with 27 of those wins coming away from home.

Combined, they posted the highest points total from any top two we have seen in the Premier League era and as they were so far clear of any other side in the division it was unsurprising to see them pick up a large amount of these away wins.

Elsewhere, the reliance on counter-attacking football in the Premier League has often led to sides being able to get results away from home. A prime example of this was Roy Hodgson’s Crystal Palace. His side were incredible on the break with the pace of Wilfried Zaha, Andros Townsend and Michy Batshuayi often causing problems for teams as the pressed forward.

This led to Palace winning almost twice as many games (9) away from home as they did at Selhurst Park in front of their own fans (5). Leicester, with the attacking talents of Jamie Vardy, Demarai Gray and James Maddison also found life good on the road. Their pacy front line saw them pick up 25 points on the road, just shy of the 27 they secured at the King Power.

Those two sides were also responsible for two of the biggest shocks of the season as Crystal Palace beat champions Manchester City 3-2 at the Etihad and Leicester beat them at home in the same month. Bournemouth record the biggest away win of the season with a 5-0 thumping of Brighton at the Amex, but they themselves were beaten at home either side of that impressive result.

Another reason for the surprising amount of away wins could be due to the fact that outside of the top six (including a poor Manchester United), there has not been much to choose between the next ten teams in the league. Anyone could beat anyone with those sides playing each other although special mention should go to Watford and Wolves for their good performances on their travels.

As you can see from the graph below, it has been a good season to be an away fan in the top flight. Could we see this record broken next season? 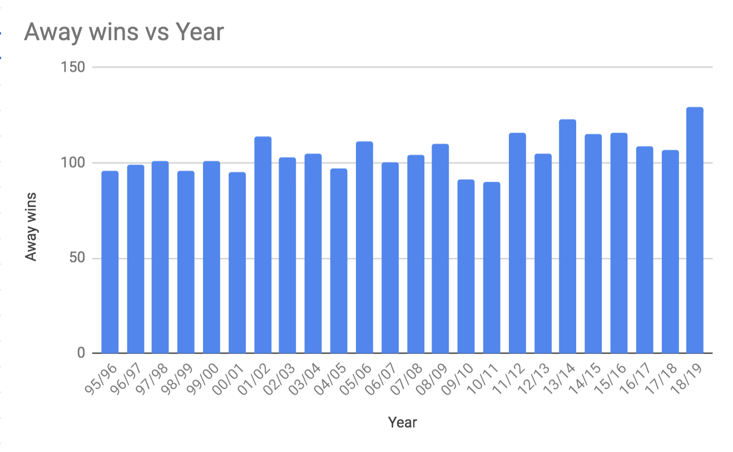