Manchester City and Borussia Dortmund went toe-to-toe on Tuesday as Liverpool were torn apart in Madrid, while on Wednesday, Bayern Munich and PSG played out a modern thriller. After the thrills and spills the Champions League provided over the past two nights, the Europa League went down like that third McDonald’s burger. It was a struggle, but you know, you’ve paid for that BT Sport subscription so might as well try and force it down yourself.

Manchester United secured an 2-0 away win in the Europa League at Granada as Marcus Rashford scored the opening goal of the game, but even the camera missed that one and we were made to watch 50+ replays as the directors desperately attempted to make up for their error. Bruno Fernandes added a second from the penalty spot late on to all but seal United’s place in the final four. Meanwhile Arsenal could only manage a 1-1 draw with Slavia Prague, as the only other English side left in this competition looked to book their place in the semi-finals.

United might well go on to win this competition this year, and in turn secure Ole Gunnar Solskjaer’s first piece of silverware as manager of the Red Devils, but there must have been some green eyes of envy flashing jealous glances at the blue side of Manchester and their Champions League endeavours earlier in the week. As important as they may claim the Europa League to be this season, it would be a telling success if they never had to compete in it again.

Although it is providing United with a chance to win a trophy, it falls somewhere between the League Cup and the FA Cup in terms of importance. Simply put, Manchester United should never be competing in Europe’s second tier competition. Instead of a trophy opportunity, every game serves a stark reminder of what they are missing.

Granada, with all due respect to the club who have gone further than ever before in European competition this year, are not the Spanish side that United should be playing in Europe. They currently lie 11th in La Liga, while in 1999, they were stranded in the fourth tier of Spanish football. Back then, United were treble winners while just a decade ago Sir Alex Ferguson’s United played Spanish giants Barcelona in the Champions League final. The standards Fergie set meant that United emerged as one of the greatest clubs in the world, fighting on all fronts and certainly competing with Europe’s elite. 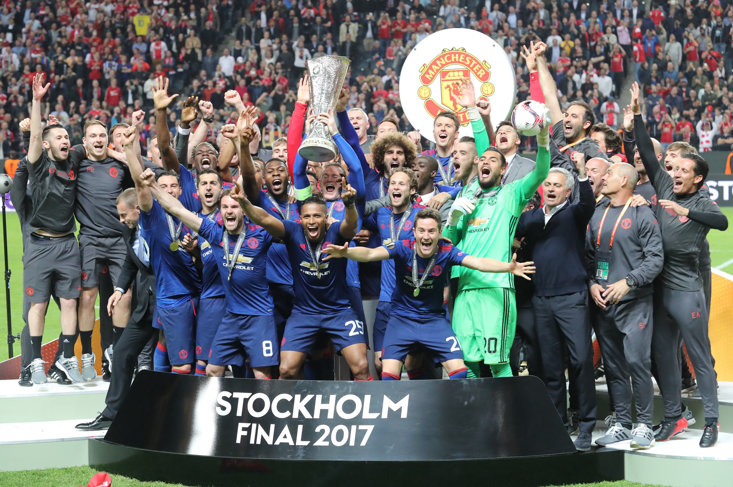 That is the level where this club belongs.

To give credit to this current Manchester United side, they have taken the Europa League incredibly seriously, both this season and when they won it in 2017. It just feels a little hollow to be talking about United reaching the semi-finals of Europe’s ancillary competition, especially as their strong league performance means that they would be playing in the Champions League next term either way.

Things are different for Arsenal, who do not boast the history, European success or guaranteed Champions League football next season. They need to win this competition. United can take it or leave it. The worry, although clear progress is being made under Solskjaer, is that standards will slip around Old Trafford and it will become the norm to be competing in the latter stages of the Europa League.

The wins can be celebrated. The trophy will be welcomed. But for Manchester United, the competition should never be cherished.

x
Suggested Searches:
Manchester United
Liverpool
Manchester City
Marcus Rashford
Premier League
More
football
Coady And Jimenez Among The Keys As Lage Seeks Flying Start...
It is the dawning of a new era for Wolverhampton Wanderers this season. Nuno Espirito Santo has moved [ ... ]
football
Five EFL Championship Players To Watch In 2021-22
The Sky Bet Championship gets underway in less than a week and fans cannot wait for another season of [ ... ]
football
Reunion With Craig Gordon A Reminder Of The Leaders Celtic Are...
Celtic’s Scottish Premiership opener will include a reunion with ex-goalkeeper Craig Gordon when [ ... ]
football
Theo Walcott Can Finish His Career On A High After Returning...
Theo Walcott was once England’s youngest-ever debutant, a speedy forward ready to put the frighteners [ ... ]
football
Treble Or Failure? Expectations Are Sky High For Gerrard And...
This time last year Rangers were a team with loads to prove and a big hole in their trophy cabinet. [ ... ]
football
Sam Kerr-Inspired Matildas Send Team GB Crashing Out Of Tokyo...
Sam Kerr inspired Australia to the semi-finals of the Olympic football tournament after a 4-3 victory [ ... ]
football
Graham Potter Will Face His Sternest Test As Brighton Manager...
Brighton and Hove Albion are about to get underway in their fifth consecutive season in the Premier [ ... ]
football
The Bold, The Brash And The Bizarre, The Best Kits For The 2021/22...
The 2021-22 season is only days away and it is time to decide on some of the nicer football kits that [ ... ]
football
Celtic Champions League Woe: Postecoglou Can't Carry The Can...
“We never stop,” insisted Ange Postecoglou to his Celtic players. “If our movement’s [ ... ]
football
Time For Dyche And Burnley To More Than Just Make Up The Premier...
Burnley are about to enter their sixth consecutive season in the Premier League, and it is time for [ ... ]
football
Toby Alderweireld Exit Another Step Closer To End Of Pochettino...
Toby Alderweireld’s Tottenham Hotspur departure is another step closer to the end of Mauricio [ ... ]
football
USWNT's Olympic Woes Are Not New But The Concern Is Very Real
We’ve been here before with the United States women’s national team… just not very [ ... ]
football
Brentford Are Way More Than Just Ivan Toney As They Approach...
Brentford will be the 50th side to have ever played in the Premier League when they begin their season [ ... ]
football
#HerGameToo Survey Reveals Shocking Scale Of Sexist Abuse Towards...
The social media movement #HerGameToo aimed at stamping out sexism in football has released the results [ ... ]
football
Future Chelsea Boss? John Terry's Aston Villa Apprenticeship...
Steven Gerrard is about to lead a title defence with Rangers, Wayne Rooney is fighting fires at Derby [ ... ]
football
Scottish Premiership Betting Preview: Rangers To Dominate Under...
The Scottish Premiership is back this weekend with a tasty opening round of fixtures kicking off the [ ... ]
football
Will Watford's Hire And Fire Policy Keep Them In The Premier...
In less than two years, Watford have had four permanent managers. Xisco is the man currently in the [ ... ]
football
Varane & Maguire Partnership Could Be Crucial to Man United's...
With the impending arrival of French centre-back Raphael Varane from Real Madrid, Manchester United [ ... ]
football
Everything You Need To Know About The Opening Weekend In The...
The 2021/22 Scottish Premiership campaign gets underway this weekend as Steven Gerrard’s Rangers [ ... ]
football
Norwich Should Be Praised For Trying To Do Things Differently...
Norwich City are always beaten with the same stick. Even when they were promoted in May, their social [ ... ]
football
On This Day In 1974: Bob Paisley Becomes Liverpool Manager As...
Much is made of Bill Shankly’s legendary impact in transforming Liverpool from a failing second [ ... ]
football
Welcome Home! The Footballers Who Returned To Their Boyhood...
Lukas Podolski has made a dream move to his boyhood club Gornik Zabrze at the age of 36, fulfilling [ ... ]
football
Former Team GB Manager Stuart Pearce Reflects On London 2012
Only one man in history has managed a men’s football team for Team GB at the Olympic Games. Back [ ... ]
football
Why Are David Beckham's Inter Miami Failing Under Phil Neville?
It wasn’t meant to work out like this. David Beckham, one of the most famous sportsmen on the [ ... ]
football
Lauren James' Chelsea Return Will Be Major Boost For The Blues...
Lauren James has returned to Chelsea and it is certainly a signing that will excite Blues fans. Having [ ... ]
football
Tokyo 2020: All The Results From The Opening Round Of Olympic...
The first round of football fixtures for the Tokyo Olympics have been completed, with an excellent result [ ... ]
football
Why Rafa Benitez's Everton Transfer Business Makes Sense This...
Rafa Benitez has got his Everton rebuild underway with the new additions of wide-men Andros Townsend [ ... ]
football
Ellen White Brace Sees Team GB To Comfortable Win In Olympic...
Team GB’s women’s football team got their Olympic campaign off to a flying start after they [ ... ]
football
Is Managing Team GB's Football Team At The Olympics An Impossible...
The Team GB women’s football team get their Olympic campaign underway on Wednesday morning against [ ... ]
football
Salford City or Bradford? Early Pre-Season Tips For The 2021/22...
The League Two season is now just over two weeks away and clubs will be desperate to welcome back fans [ ... ]