Football
News
With all England’s attacking options, there needs to be some level of context applied to the Borussia Dortmund star's lack of game time
Simon Lillicrap
14:05, 23 Jun 2021

Borussia Dortmund’s Jadon Sancho got his first taste of major tournament action for England as Gareth Southgate’s men won Group D with a 1-0 win over Czech Republic, but the winger was only on the Wembley pitch for seven minutes.

With Mason Mount and Phil Foden out, Jack Grealish was moved into a number ten role and Bukayo Saka started on the right-wing, the same role which Sancho occupies for Dortmund. Unfortunately for Sancho, Saka had an absolute blinder as his driving attacking runs and defensive attitude won him ‘Star of the Match’ and he was a huge plus as England kept another clean sheet.

Sancho is clearly a hugely talented 21-year-old. He recovered from injury to finish the 2020/21 campaign with 30 goal contributions and was one of Dortmund’s most creative players, well deserving of his spot in England’s 26-man squad. The issue he faces is that England’s depth in those wide areas is more fruitful than it has ever been and Southgate has a difficult job merging together a quartet of players who provide the perfect blend of pace, talent and experience.

The German press have been left baffled by his lack of game time, especially when the Three Lions were struggling against Scotland. German publisher Bild commented:

“With his speed on the ball, the Dortmund player is a headache for defenders when he is in the right mood. He's unpredictable and he can change games. The problem is that Southgate doesn't seem to trust him to do so.” 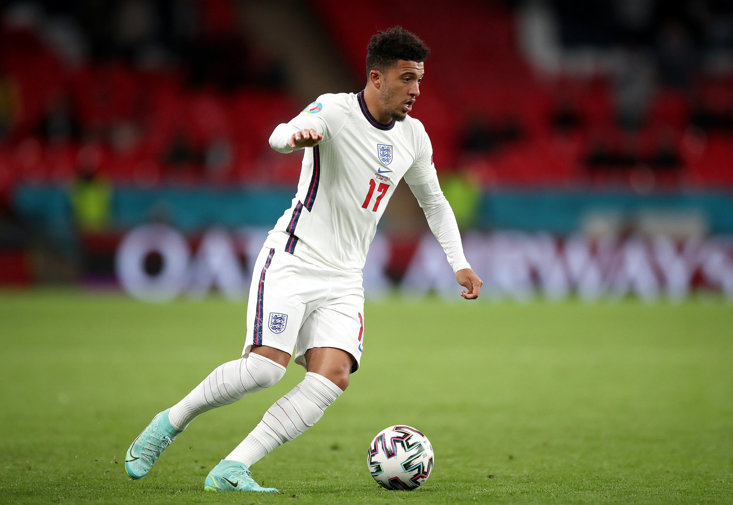 The key words in that comment? “When he is in the right mood”. With all their options, England cannot risk it all on a player who has relatively little international experience and who has never shown the same form internationally as he does for Dortmund. It could be a case of the faster paced club football suiting Sancho more, as his talent is unquestionable, but with all England’s attacking options, there needs to be some level of context applied to his lack of game time.

Arguably, England have the most talented and varied attacking line-up, all of whom are of a similar ability. France have Karim Benzema, Kylian Mbappe and Antoine Griezmann, three standout forwards all guaranteed to start, but for Southgate, it is not quite as clear cut. Even so, the decision on who starts in those attacking spots really isn’t as pivotal as those on social media like to make out.

For the last 16 match, Harry Kane is a guaranteed starter up front, as is England’s only Euro 2020 goal scorer Raheem Sterling on the left-wing. Either Jack Grealish or the currently isolating Mason Mount will start in the attacking midfield role which leaves just the right-wing place up for grabs.

Phil Foden is England’s golden boy, and one of the most talented teenagers in Europe and one of the best players on the ball in this England side. He hit the post in the opening moments against Croatia and certainly can bring a lot to this side, even if he was ineffective in the sluggish draw with Scotland.

Saka showed he is the most likely to come in for Foden with his fantastic performance against the Czechs. Southgate, who knows his England players better than anybody else, has clearly been impressed with the 19-year-old Arsenal man in training, who made 17 goal contributions in a poor Arsenal side this term.

“We have been super impressed with Bukayo Saka throughout the month,” Southgate said after Tuesday night’s win. “He was excellent up at Middlesbrough and we have liked him with and without the ball. His receiving tonight under pressure was fantastic.”

Meanwhile Marcus Rashford has been poor so far this tournament, is more effective on the left and seems to be carrying a long term injury, but his England experience makes him a viable option, which leaves Sancho somewhere towards the back of the pack.

Like it or not, a Premier League move this summer, something that could be affecting his current training performances, is likely to bump him up the pecking order by the time we reach the World Cup, but the likes of expats Kieran Trippier and club teammate Jude Bellingham have both received ample game time so far. Southgate is fully aware of the talents he has at his disposal, judging them every single day in training and Sancho’s time will come for England.

It is just unlikely to come at this tournament.

x
Suggested Searches:
Manchester United
Liverpool
Manchester City
Marcus Rashford
Premier League
More
football
Reunion With Craig Gordon A Reminder Of The Leaders Celtic Are...
Celtic’s Scottish Premiership opener will include a reunion with ex-goalkeeper Craig Gordon when [ ... ]
football
Theo Walcott Can Finish His Career On A High After Returning...
Theo Walcott was once England’s youngest-ever debutant, a speedy forward ready to put the frighteners [ ... ]
football
Treble Or Failure? Expectations Are Sky High For Gerrard And...
This time last year Rangers were a team with loads to prove and a big hole in their trophy cabinet. [ ... ]
football
Sam Kerr-Inspired Matildas Send Team GB Crashing Out Of Tokyo...
Sam Kerr inspired Australia to the semi-finals of the Olympic football tournament after a 4-3 victory [ ... ]
football
Graham Potter Will Face His Sternest Test As Brighton Manager...
Brighton and Hove Albion are about to get underway in their fifth consecutive season in the Premier [ ... ]
football
The Bold, The Brash And The Bizarre, The Best Kits For The 2021/22...
The 2021-22 season is only days away and it is time to decide on some of the nicer football kits that [ ... ]
football
Celtic Champions League Woe: Postecoglou Can't Carry The Can...
“We never stop,” insisted Ange Postecoglou to his Celtic players. “If our movement’s [ ... ]
football
Time For Dyche And Burnley To More Than Just Make Up The Premier...
Burnley are about to enter their sixth consecutive season in the Premier League, and it is time for [ ... ]
football
Toby Alderweireld Exit Another Step Closer To End Of Pochettino...
Toby Alderweireld’s Tottenham Hotspur departure is another step closer to the end of Mauricio [ ... ]
football
USWNT's Olympic Woes Are Not New But The Concern Is Very Real
We’ve been here before with the United States women’s national team… just not very [ ... ]
football
Brentford Are Way More Than Just Ivan Toney As They Approach...
Brentford will be the 50th side to have ever played in the Premier League when they begin their season [ ... ]
football
#HerGameToo Survey Reveals Shocking Scale Of Sexist Abuse Towards...
The social media movement #HerGameToo aimed at stamping out sexism in football has released the results [ ... ]
football
Future Chelsea Boss? John Terry's Aston Villa Apprenticeship...
Steven Gerrard is about to lead a title defence with Rangers, Wayne Rooney is fighting fires at Derby [ ... ]
football
Scottish Premiership Betting Preview: Rangers To Dominate Under...
The Scottish Premiership is back this weekend with a tasty opening round of fixtures kicking off the [ ... ]
football
Will Watford's Hire And Fire Policy Keep Them In The Premier...
In less than two years, Watford have had four permanent managers. Xisco is the man currently in the [ ... ]
football
Varane & Maguire Partnership Could Be Crucial to Man United's...
With the impending arrival of French centre-back Raphael Varane from Real Madrid, Manchester United [ ... ]
football
Everything You Need To Know About The Opening Weekend In The...
The 2021/22 Scottish Premiership campaign gets underway this weekend as Steven Gerrard’s Rangers [ ... ]
football
Norwich Should Be Praised For Trying To Do Things Differently...
Norwich City are always beaten with the same stick. Even when they were promoted in May, their social [ ... ]
football
On This Day In 1974: Bob Paisley Becomes Liverpool Manager As...
Much is made of Bill Shankly’s legendary impact in transforming Liverpool from a failing second [ ... ]
football
Welcome Home! The Footballers Who Returned To Their Boyhood...
Lukas Podolski has made a dream move to his boyhood club Gornik Zabrze at the age of 36, fulfilling [ ... ]
football
Former Team GB Manager Stuart Pearce Reflects On London 2012
Only one man in history has managed a men’s football team for Team GB at the Olympic Games. Back [ ... ]
football
Why Are David Beckham's Inter Miami Failing Under Phil Neville?
It wasn’t meant to work out like this. David Beckham, one of the most famous sportsmen on the [ ... ]
football
Lauren James' Chelsea Return Will Be Major Boost For The Blues...
Lauren James has returned to Chelsea and it is certainly a signing that will excite Blues fans. Having [ ... ]
football
Tokyo 2020: All The Results From The Opening Round Of Olympic...
The first round of football fixtures for the Tokyo Olympics have been completed, with an excellent result [ ... ]
football
Why Rafa Benitez's Everton Transfer Business Makes Sense This...
Rafa Benitez has got his Everton rebuild underway with the new additions of wide-men Andros Townsend [ ... ]
football
Ellen White Brace Sees Team GB To Comfortable Win In Olympic...
Team GB’s women’s football team got their Olympic campaign off to a flying start after they [ ... ]
football
Is Managing Team GB's Football Team At The Olympics An Impossible...
The Team GB women’s football team get their Olympic campaign underway on Wednesday morning against [ ... ]
football
Salford City or Bradford? Early Pre-Season Tips For The 2021/22...
The League Two season is now just over two weeks away and clubs will be desperate to welcome back fans [ ... ]
football
Postecoglou's Celtic Reign Begins In Champions League But He...
Celtic’s 2021/22 season gets underway under the new regime of Ange Postecoglou as they host FC [ ... ]
football
Sunderland? Wednesday? Ipswich? Pre-Season Tips For The 2021/22...
The new Football League season is now only a matter of weeks away and clubs up and down the country [ ... ]