While England’s 56-year quest for a men’s World Cup takes them to Al Khor on Saturday to face France, the nation’s world-renowned top flight has done remarkably well out of Les Bleus when it comes to boasting world champion players.

Of the 12 players ever to have won the World Cup while representing Premier League clubs, eight have worn the famous blue of France (for the quiz enthusiasts, the other four – Mesut Ozil, Lukas Podolski, Andre Schurrle and Per Mertesacker – were part of Germany’s 2014 squad).

In 1998, Aime Jacquet made the most of having a new-found Premier League influence at a key moment in Les Bleus’ first World Cup win. While Emmanuel Petit had started every game other than the 4-0 group win over Saudi Arabia, Arsenal team-mate Patrick Vieira and Chelsea’s Frank Leboeuf had been used only when Group C was already won and Denmark arrived for their clash in Lyon.

But when Laurent Blanc was sent off in the semi-final it opened the way for Leboeuf to deputise in the biggest game of his life, and Vieira was brought on to replace Youri Djorkaeff for the last 15 minutes as Jacquet looked to get extra legs in midfield to punish an over-stretched Brazil side looking to wipe out France’s 2-0 lead.

After Petit put the result beyond doubt in injury time, the whole nation began to celebrate. The Premier League had its own little piece of history too, with Petit, Leboeuf and Vieira becoming the new division’s first World Cup winners.

They would all become mainstays of arguably the greatest spell of France’s history, their combined 24 caps prior to moving to England being transformed into 220 total international appearances, with Vieira logging all of his 107 caps after leaving AC Milan for Arsenal in 1996. 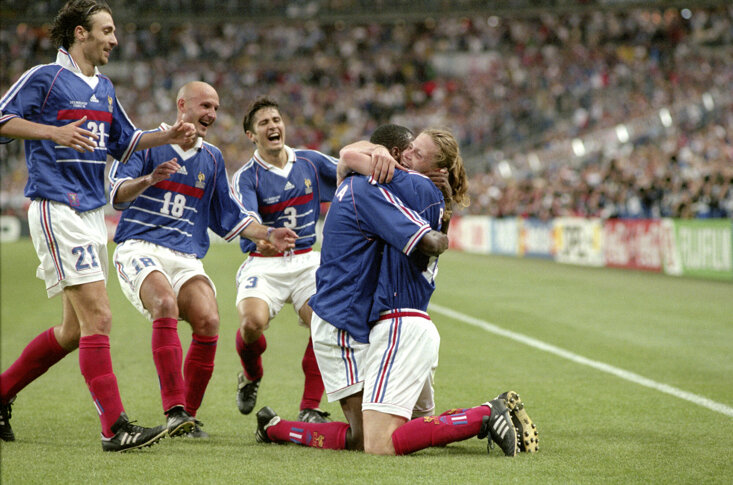 VIEIRA AND PETIT (BOTH KNEELING), AND LEBOEUF (No.18) WERE THE EPL'S FIRST WORLD CHAMPIONS

Twenty years on, there was a quintet of Premier League players in France’s second world title in Russia, with four – Hugo Lloris, Paul Pogba, N’Golo Kante and Olivier Giroud – being regular starters in the run to glory under Didier Deschamps.

Tottenham Hotspur’s Lloris captained the side in goal, while Manchester United’s Pogba partnered with Kante of Chelsea to form a multi-functional midfield axis. And although he played in all seven games without scoring, Chelsea striker Giroud was one of France’s best-performing stars as he provided the focal point for a vibrant attacking unit.

There has been a symbiotic relationship between l’Hexagone and the modern English top flight over the last 30 years, and if Les Bleus were to retain their crown in Qatar they would add another five names to the golden list, with Lloris becoming the first player to win the World Cup twice while representing an English club.

Of course, a win for the Three Lions would dwarf that French number, while a sixth world crown for Brazil would come complete with 13 current Premier League links. But it is Les Bleus whose EPL contingent have delivered on the World Cup stage more than once before.

‘The best league in the world’ could well be about to supply some more world champions.

x
Suggested Searches:
The Sportsman
Manchester United
Liverpool
Manchester City
Premier League
More
football
Tony Pulis: The 'Old School' Manager That Ripped Up The Premier...
‘Yeah, but can he do it on a cold Tuesday night at Stoke City?’ Never has one manager given [ ... ]
football
Alessia Russo And The Window Into The Future Of Women's Football...
As ever, a big transfer bid has stolen the headlines on January 31. It’s been a fair while since [ ... ]
football
Deadline Day LIVE: Latest Deals & Transfers From Around Europe
Hello and welcome to The Sportsman's Deadline Day LIVE, a blog that will be providing you with the [ ... ]
football
How The New Napoli Are Making History To Match Maradona's Sensational...
There’s something different about football in Naples. With its foreboding stadium, its fervent [ ... ]
football
A Fine Mess We've Got Ourselves Inter: Newcastle United's Intertoto...
Suffice to say it’s been a while since Newcastle United won a trophy. As the Magpies prepare to [ ... ]
football
Antonio And Bowen Impress As West Ham See Off Derby To Book...
West Ham United booked an FA Cup Fifth Round trip to Manchester United as they defeated Derby County [ ... ]
football
Wrexham Get Potential Spurs Clash: The FA Cup Fifth Round Draw
National League Wrexham face a a potential visit of Premier League Tottenham Hotspur  in the FA [ ... ]
football
£25m Valued Everton Target Viktor Gyokeres Is Tailor-Made For...
No player in the Championship gets more praise from the opposition managers. No forward causes such [ ... ]
football
''We're A Real Club Again'' - What's Changed At Derby County...
New owner and lifelong fan David Clowes has made quite the impression at Derby County. At the start [ ... ]
football
Amanda Serrano Vs Erika Cruz: Everything You Need To Know
Seven-weight world champion Amanda Serrano will have her eyes set on making more history this weekend [ ... ]
football
Bring On The Sequel: Proud Wrexham Prove Their Quality Despite...
Wrexham came so close. They were just three minutes away from pulling off another FA Cup giant-killing, [ ... ]
football
Liverpool Are Out Of The FA Cup: Have They Invested In The Wrong...
Kaoru Mitoma scored a wonderful injury-time winner to dump holders Liverpool out of the FA Cup as Brighton [ ... ]
football
Great FA Cup Run Is Major Sign Of Wrexham's Progress Under Reynolds...
This week, ahead of their Fourth Round FA Cup tie with Sheffield United, Wrexham went to the top of [ ... ]
football
How Adam Lallana Has Transitioned From Midfield Maestro To Dressing...
Brighton & Hove Albion are preparing to face Liverpool for the third time this season as the pair [ ... ]
football
Brazilian Boys Star As Manchester United Progress to FA Cup...
Manchester United’s Brazilian boys dazzled to send the club through to the FA Cup Fifth Round [ ... ]
football
Son Sparkles As Spurs Cruise Past Preston To Reach FA Cup Fifth...
A stunning brace from Son Heung-min helped book Tottenham Hotspur’s place in the Fifth Round of [ ... ]
football
Iheanacho Comes To Leicester City's Rescue Again: Why He Deserves...
Kelechi Iheanacho’s second-half strike was the difference as Premier League Leicester City defeated [ ... ]
football
Too Tinpot For TV: Why Are Bosses Wasting Yet Another Slot On...
“Please give me more Manchester United versus Reading,” said nobody ever. And yet here we [ ... ]
football
Antonio Conte Is The Underrated FA Cup Specialist That Can Win...
FA Cup specialists are hard to come by. Ashley Cole dominated the competition with a ridiculous and [ ... ]
football
Made In Manchester: How United And City Inspired McKenna And...
Saturday’s FA Cup fourth round clash between Ipswich Town and Burnley is an intriguing meeting [ ... ]
football
Gianluigi Buffon At 45: Italy's Elder Statesman Remains Young...
Gianluigi Buffon’s career looked like it might be reaching its end as early as 2010. At the age [ ... ]
football
Manchester City Remind Arsenal Why They've Ruled English Football...
Form is temporary, class is permanent. It’s a cliche so rote that Chat GPT would probably put [ ... ]
football
Ward-Prowse Needs To Leave Southampton Or Risk Becoming The...
Call me an old cynic but I’ve got a feeling Southampton are going to get relegated this season. [ ... ]
football
Road To Wembley Part 10: Birmingham's Decline From Twin Towers...
The Sportsman’s Road To Wembley has taken us to the West Midlands after Birmingham City got [ ... ]
football
Paul Robinson Believes Harry Kane Will Stay At Tottenham Hotspur
Paul Robinson believes Harry Kane will stay at Tottenham Hotspur but says the club need to tie him down [ ... ]
football
Oleksandr Zinchenko: The One That Got Away For Pep Guardiola...
As Eddie Nketiah tapped home the winner against Manchester United at the Emirates on Sunday, Oleksandr [ ... ]
football
Growing Domestic Competition Will Only Boost Chelsea's Champions...
Over the past few years English football has been dominated by Emma Hayes’ Chelsea with multiple [ ... ]
football
Jose Mourinho At 60: The Managerial Maverick Who Has Never Lost...
‘The Special One’ turns 60 today. Jose Mourinho has had an indelible impact on football [ ... ]
football
Manchester United's Wout Weghorst And The Art Of The Short-Term...
At the third time of asking, Wout Weghorst scored his first Manchester United goal on Wednesday night. [ ... ]
football
Graham Potter Needs Thiago Silva To Stay To Get Chelsea In Better...
Reports broke earlier in the week that Thiago Silva is set to sign another contract extension at Chelsea [ ... ]