Football
News
The Egyptian is after one last mega-deal at Liverpool before his twilight years
Andrew Dillon
12:00, 13 May 2022

Self-congratulation is no recommendation - unless you are Mo Salah. And if you now happen to hold the upper hand in contract talks with your employers.

Liverpool’s owners in America will have woken up on Wednesday to jarring news that Manchester City had just bagged the best striker in the world in Erling Haaland. At Anfield they have the second best in Salah, who not only terrorises opposition defences, he does it in the style of an Olympic figure skater weaving his way across the ice to classical music.

But while City have moved with the swiftness of kleptomaniacs on a shoplifting spree to grab Haaland before anyone else gets a look in, Liverpool are still dithering over a new deal for their Egyptian magician.

So what better timing for Salah to proudly boast ahead of this weekend’s FA Cup final that, in his opinion, he is the best in the world.

Of course, he would say that wouldn’t he? Anyone who can see their position as the most potent forward in England suddenly under threat is going to big themselves up to get a pay rise while the going is still good.

This week he proclaimed: “If you compare me with any player in my position, not only in my team but in the world, you will find I am the best. My numbers are the best proof of my words.”

Salah is synonymous with the current Liverpool side that has been described as the best ever at Anfield. He has also clearly inherited the Scouse tradition of talking a good game. Yet he can back it up.

The current top scorer in the Premier League this season with 22 goals and the architect of so many of Liverpool’s spellbinding, attacking moves, he is ruthless with a ball and with words.

He is also 29 and knows this next contract is the last big one before starting the slide towards the twilight years of his stellar career. The contract expires in just over a year and Liverpool manager Jurgen Klopp insists he is ‘happy’ with progress between player and club over a new deal. 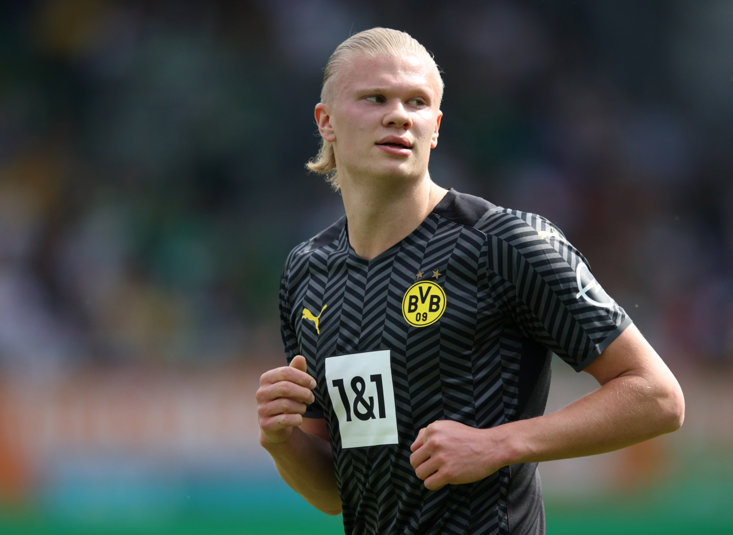 HAALAND THREATENS TO PUT FURTHER SPACE BETWEEN CITY AND THE REST

However, the beancounters at Anfield may yet find themselves punished like lazy defenders for not getting the ink on the paper sooner. Haaland is coming to this country sometime in July on wages not far shy of £500K a week. A mega-contract priced at around £30 million over its lifetime. And Klopp knows that with the devastating young Norwegian within Manchester City’s ranks next season, Liverpool’s campaign to topple their rivals suddenly looks a whole lot tougher.

Salah and his advisors should realise that too. If they don’t they are not doing their jobs properly. They now have the chance to squeeze Liverpool’s bank balance just that little bit tighter before agreeing for their man to stay on. I would if it were me.

Salah also has eight Champions League goals this season. Without him, there would be no historic Quadruple quest. It’s a point not lost on the Liverpool fans. The Carabao Cup is won, this weekend he seeks to add the FA Cup, followed by the Champions League later this month. The Premier League may prove one trophy too many, but there is no doubt Salah spearheads a Liverpool team that is on the cusp of something truly historic.

It is highly unlikely things will be quite the same next season when 22-year-old Haaland is ripping it up in partnership with Kevin de Bruyne, putting serious distance between City and the rest thanks to their bold investment. And that is why Salah has come out and reminded us that he is still a force to be reckoned with. It’s a message with two meanings.

It is a shot across the desk of the Anfield accountants who have yet to nail the contract that will see him through to the end of his career. And it also serves as a warning to Haaland that he might come to England and find an angry old man looking for a fight - like an irate OAP who loses his place to a teenager in a bus queue.