Golf
News
''Why Is A Bogey Called A Bogey?'' All The Answers To The Golf Questions You've Always Asked Yourself
Simon Lillicrap
14:09, 11 Apr 2019

The Masters gets underway in Augusta today and the eyes of the sporting world will turn their attention to Georgia for the first major of the year. There are some huge stories to keep an eye out for, Tiger Woods is after his fifth Green Jacket, Rory McIlroy is hoping to complete the career Grand Slam whilst Rickie Fowler is still chasing his first major.

All of those top players will be hoping for albatross’, eagles and birdies and avoid those dreaded bogies, but where on earth did these terms originate from? The sport of Golf features some of the most brilliant and quirky terminologies of any sport in the world and we have delved into the history books to discover their origins.

Let’s start with the stinker. Getting one over par in golf actually has nothing to do with picking your nose. The term actually originated around 1890, when, according to Robert Browning’s History of Golf in 1955, Mr. CA Wellman said to Dr. Browne: "This player of yours is a regular Bogey man".

That term itself came from a popular song at the time: 'Hush! Hush! Hush! Here Comes the Bogey Man' and the name stuck and became part of the golfing lexicon.

Par. Average for a top class golfer. This Latin term for equality dates back to the 16th century (OxfordDictionaries) and is still used today to describe something ordinary. It was first used by golfers in the 1890’s when originally it was the standard for professionals whilst amateurs aimed for a bogey.

This lead to the current definition, where bogey means one over par whilst par itself is the minimum aim for professional golfers.

Now we get to the Avian references in golf which dominate the sport. An American magazine frequently used the word bird to refer to something good in the early 20th century and in 1911, Maclean Magazine described a golf shot as: “Bird, straight down the course, about two hundred and fifteen yards.” (ScottishGolfHistory)

The first use of the word birdie is dated back to 1903 in Atlantic City, in a game between two brothers and their friend. One of the brothers, AB Smith, referred to one of his shots as a bird, before holing his putt to get one under par. They all referred to that shot as a birdie from then on.

Another bird. Another excellent score in golf. Another AB Smith invention. When asked what his group referred to two under par, Smith said ‘an Eagle’. This term was coined around the same time as the birdie and was introduced to Britain in 1919 after catching on in America.

Masters Tournament
@TheMasters
The hole locations for the first round of #themasters. 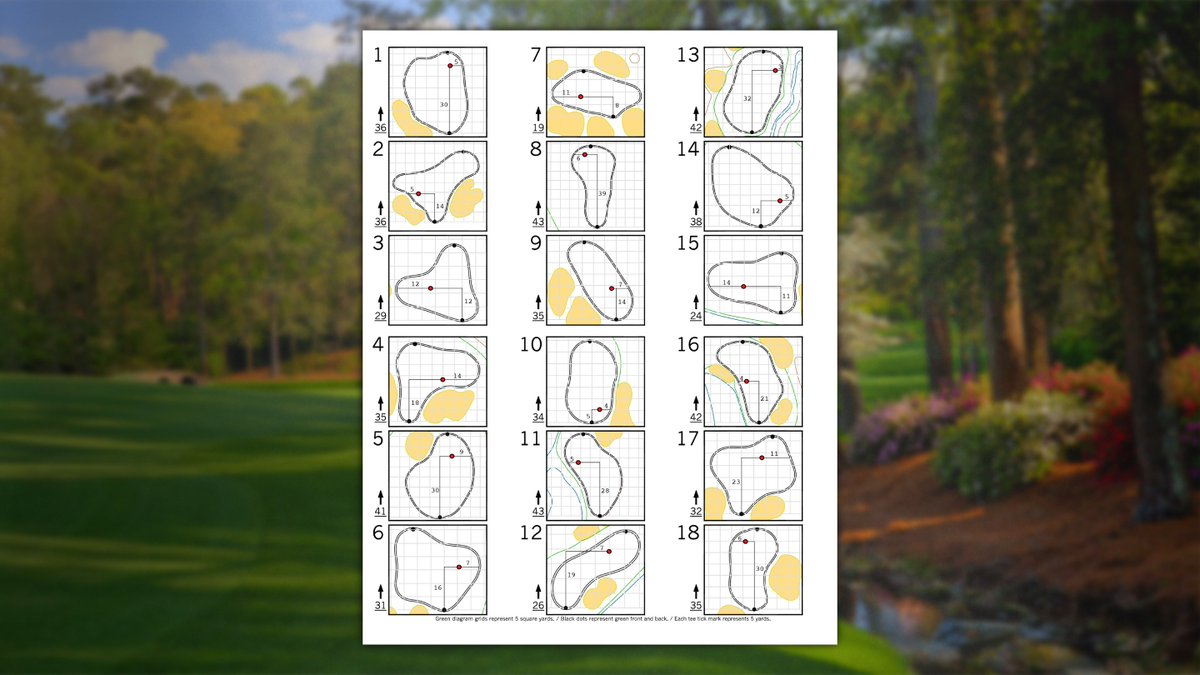 AB Smith, the suave innovator that he was, actually can’t take credit for this one. His group used the term ‘Double Eagle’ which could be misconstrued to mean four under par rather than three. The Brits came to save the day here, continuing the feathered theme with the term Albatross.

The thinking behind this one is that an Albatross is incredibly rare to see, as is three under par in golf. The name rose to prominence as the score became more common in the 1920’s thanks to steel shafted clubs.

Why do golfers shout “FORRRRREEEEEE”?

Why on earth do golfers shout “Fore” when they’ve hit a poor shot that could hit someone? There are two interesting theories to this. The first is that it is short for the word ‘forecaddie’ - a person who tracks the ball and finds where it lands. This person is not anything to do with the normal caddie, who helps carry clubs and makes decisions on the course.

The second theory is that it originates from the military. The phrase ‘beware before’ was yelled to alert people to missiles that were falling and was shortened for ‘fore’ for golf.

Does a caddie actually do anything?

Top caddies around the world can earn around £1 million a year now such is their importance to the modern day. A good caddie will advise their player on the best strategy, clubs and shots to play throughout the round.

But the name caddie originates from the French language. Cadet is the word used for the youngest in France so it makes sense that he would be the one to carry the clubs.

Why are there 18 holes in a round of golf?

The Old Course at St Andrew’s has 18 holes. That is about it.  This was first seen around 1764 but wasn’t copied and standardised for over one hundred years.

Let’s finish where most Golfers end up. The 19th hole is the colloquial term for the courses lounge area with a bar. This is the hole that really matters.

The Masters this week will provide all the thrills and spills but at least now you can know a bit about golf’s niche little quirks.

x
Suggested Searches:
Tyson Fury
Manchester United
Marcus Rashford
Lewis Hamilton
F1
Air Jordan
More
golf
Man, Megastar, And Mortal: The Book Examining The Second Life...
He’s the one name people who know nothing about golf, know about golf. But aside from the 15 Majors, [ ... ]
golf
Inside Michael Jordan’s Exclusive Golf Club, Where Drinks Are...
To the casual observer the Grove XXIII may seem like just another ordinary golf club in Hobe Sound, [ ... ]
golf
Caley Show That Buying Top Quality Golf Clubs Needn't Be Pricey...
A trip to the local golf course may seem like a distant dream for many of us, with the nation being [ ... ]
golf
The Best Gear And Gadgets To Get Your Golf Game To The Very...
“Confidence is the most important single factor in this game, and no matter how great your natural [ ... ]
golf
Flawless Colin Morikawa Is Golf’s Next Big Thing - But We Shouldn’t...
The world of golf witnessed one of the most remarkable feats in the sport’s history this weekend [ ... ]
golf
Squad Up! The Golf Gadgets Straight Out Of A Call Of Duty Game
Unless you live in Manchester where you’ve likely been raving hard in a field for the last three [ ... ]
golf
Knees And Tees: How The Ancient Game Of Golf Is Evolving
Long winding walks, falling leaves and a whole heap of fascinating wildlife. No, this isn’t the [ ... ]
golf
FedEx Cup 2019: Breaking Down Rory McIlroy’s $15 Million Win
On Sunday, Rory McIlroy won the Tour Championship for the second time to secure the FedEx Cup and take [ ... ]
golf
The Open 2019: Brooks Koepka Has A Not So Secret Weapon Up His...
1st, T6, T13, 1st, T39, 1st, T2, 1st, 2nd. Brooks Keopka’s last nine standings in major competition [ ... ]
golf
Duel In The Sun: When Tom Watson Famously Battled Past Jack...
The history of sport is jam-packed with epic duels. Only last weekend, Novak Djokovic ousted Roger Federer [ ... ]
golf
The Open Championship: Five Moments To Remember
Thousands of golf fans will be heading to Royal Portrush for this year’s Open Championship, the [ ... ]
golf
The Healing Power Of Sport: The Open Returns To Northern Ireland...
Peace is, as ever, precarious. Like an artisan mirror, so thoughtfully and delicately crafted, but with [ ... ]
golf
Carnoustie Capitulation: Jean Van de Velde's 1999 Open Meltdown
Occasionally in sport the name of the loser is easier to recall than that of the victor and that was [ ... ]
golf
Harry Vardon: Golf’s First International Superstar Who Remains...
When you think of famous multiple winners of The Open Championship the likes of Tom Watson, Jack Nicklaus, [ ... ]
golf
From Tragedy To Triumph: How Nate Lashley’s Rocket Classic Triumph...
Nate Lashley’s triumph at the Rocket Mortgage Classic may have slipped under the radar this weekend [ ... ]
golf
Gary Woodland: Four Things You Need To Know About The 2019 US...
Gary Woodland made a mockery of his long ante-post odds of 75/1 as he scooped his first major title [ ... ]
golf
From The Vault: When Tiger Woods Stunned The World At The 2000...
Athletes often talk about the importance of being “in the zone”. The perfect state of mind [ ... ]
golf
2019 US Open: Brooks Koepka Can Join This Elite Group Of Hat-Trick...
Since the start of 2017 Brooks Koepka’s cumulative score in major events is a simply staggering [ ... ]
golf
In Numbers: Double PGA Championship And US Open Champion Brooks...
Tiger Woods may have conjured up one of sport’s greatest comeback stories at the Masters in April [ ... ]
golf
2019 PGA Championship: How Tiger Woods Can Become The New World...
Tiger Woods has not played since his stunning comeback victory at the Masters two months ago, which [ ... ]
golf
Tiger Woods In Numbers: From Career Earnings To Tournament Triumphs
Tiger Woods is no stranger to making history. The man that transcends golf has broken a plethora of [ ... ]
golf
What Next For Tiger Woods? The Raft Of Records The 2019 Masters...
After all the drama, all the stories, all the injuries, setbacks, and moments of self-doubt, Tiger Woods [ ... ]
golf
Everyone Should Know Who Lee Elder Is And His Importance To...
In 1903, black boxer Jack Johnson was forced to travel halfway around the globe to Australia for the [ ... ]
golf
Masters 2019: Jimenez, Woods, Daly? These Are The Coolest Golfers...
The 83rd Masters Tournament teed off this week in Augusta, Georgia and whilst most of the [ ... ]
golf
Five Huge 2019 Masters Talking Points: Featuring Tiger Woods,...
All eyes will be on Augusta this Thursday when the greatest golfers in the land swing it out for the [ ... ]
golf
The Masters In Numbers: From Record Breaking Triumphs To Cracking...
Eighty seven players are set to tee off at the Masters this week, the joint-smallest Augusta field [ ... ]
golf
The Masters Top 10 Power Rankings: Is Tiger Woods Ready To Don...
The first golf major of the year is less than two weeks away as The Masters takes centre stage at Augusta [ ... ]
golf
Irish Golfer Shane Lowry Hits Second Hole-In-One At British...
Shane Lowry produced a moment of brilliance on day two of the British Masters at Walton Heath as the [ ... ]
golf
English Golfer Eddie Pepperell Pings In Stunning Hole-in-One...
English golfer Eddie Pepperell has just scored a corking hole-in-one at the ninth at the Walton Heath [ ... ]
golf
Ryder Cup Flops Dustin Johnson And Brooks Koepka Star In The...
Team American jetted over to France last month looking to win their first Ryder Cup on European soil [ ... ]