Football
News
Why It’s Mo Salah Out And Raheem Sterling In For Your Fantasy Premier League Team This Week
FPL Bottom Line
16:15, 29 Mar 2019

Tension rises and nerves start to kick in for Fantasy Football managers everywhere ahead of the biggest gameweek of the Premier League season. Why is it the biggest? Well, we have a gargantuan 15 fixtures to look forward to with 10 teams playing twice between Saturday 30th March and Wednesday 3rd April:

The Sportsman takes a look at what you could do this weekend to get ahead of the pack and reap in those sweet, sweet, fantasy points, and make your friends, colleagues, or general acquaintances squirm with envy for Gameweek 32.

Need to free up funds? It’s time to get rid of Mohamed Salah. The ‘Egyptian King’ has now blanked in his last five league games for Liverpool and has already decreased £0.2m in value since the Reds’ 5-0 win at Anfield to Watford in Gameweek 28.

Over 300,000 players have transferred Salah out this gameweek and at a price of £13.3m, there certainly looks to be better value elsewhere by cashing in.

Feeling confident about this delicious doubler? Well don’t get too cocky yet. Only two Double Gameweek 32 teams - Chelsea & Crystal Palace - will play in a reduced Gameweek 33, when only six Premier League matches take place.

Plan ahead due to the postponements caused by the FA Cup semi-finals, which will leave some managers in a tricky situation with the lack of players participating over the first weekend of April.

In the reversal of the fixtures against Cardiff City and Brighton & Hove Albion - who the Blues play this gameweek - Hazard accumulated four goals and an assist, procuring a massive combined haul of 33 points from just those two games.

This is even without mentioning the brilliant Belgian’s stunning form coming out of the international week, with his brace against Russia and a goal against Cyprus. Surely a potential captain for GW32?

Since switching to a left-wing role in Pep Guardiola’s desired 4-3-3 formation at Manchester City, Raheem Sterling has since gone on to have a hand in 16 goals in 12 games for club and country combined.

The second-highest points-earner in the entire game, in the last three weeks Sterling has also become the first player to score a hat-trick for club & country in the same month in nearly twenty years, Alan Shearer the last to do so in September 1999!

Speaking of Manchester City players, it would be audacious not to highlight one of the Premier League’s most prolific strikers in Sergio Aguero.

The Argentine currently leads the race for the Golden Boot and to help further his tally, he faces two of the three teams positioned in the relegation zone, in Fulham and Cardiff who the Cityzens have previously defeated this season by an aggregate score of eight goals without reply.

Furthermore, Argentina boss Lionel Scaloni did not recall the striker for international duty, meaning that Aguero now has been rested for a whole fortnight. After recording a goal every 75 minutes in all club competitions in 2019, you shouldn’t think twice about putting Kun in your team!

Selected by only 1.9% of teams, Crystal Palace’s Michy Batshuayi looks to be a dream differential. The Belgium international boasts an involvement of five goals in his last eight games for club and country.

On the road with the Eagles, away from Selhurst Park, the Chelsea loanee Batshuayi has produced three goals in his last three appearances.

Furthermore, Palace’s opponents Tottenham Hotspur, who will christen their new stadium by welcoming Roy Hodgson’s side, have had worrying slip-ups against relegation battlers Burnley and Southampton in recent weeks.

If this doesn’t tempt you enough, Palace first host rock bottom Huddersfield Town in their preceding fixture. The Terriers have only managed to succeed away from home once this season and have conceded 33 goals in the process. 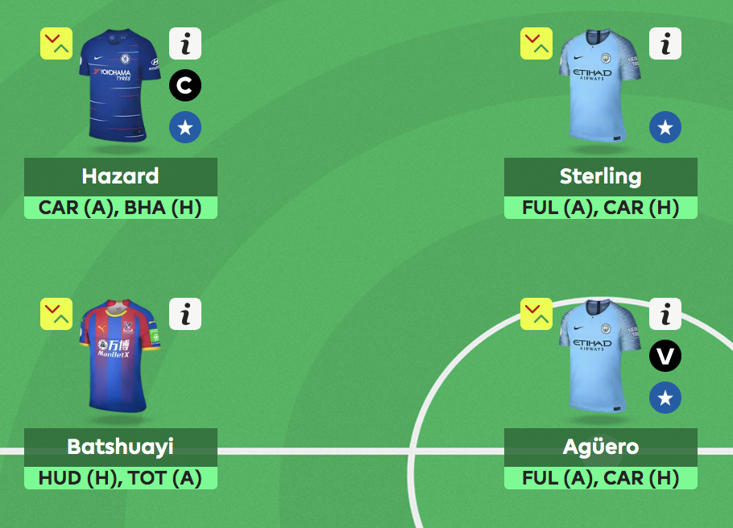