While Manchester United are still trying to come to terms with their 4-0 humiliation against Brentford on Saturday, the club are trying to appease their disheartened fans, who feel like the club have hit rock bottom as they lie at the foot of the Premier League table.

There was no heart in the team performance at the weekend, like for far too many games to count in 2021-22, and manager Erik ten Hag has likely been given the biggest reality check with regards to the gargantuan task he has on his hands. There are countless problems within the team that need to be addressed and unfortunately for the Dutchman, they are not going to happen overnight as it is almost impossible to discard an entire squad and replace it in just one transfer window.

The summer market closes in just over two weeks and United are racing against the clock to bring in some players who are going to help with Ten Hag’s cause and influence positive results on the pitch. While there are countless reasons for people to be concerned about the defence, it appears as though the club are looking to address the severe lack of goal threat within the side, as Ten Hag looks to add some firepower into his team, while potentially helping with one of United’s biggest recurring problems: Cristiano Ronaldo.

The 37-year-old striker has acted like a spoiled child throughout the summer, making it known he wants a move, turning up late for pre-season, leaving friendly matches early and stropping around the pitch with negative body language. 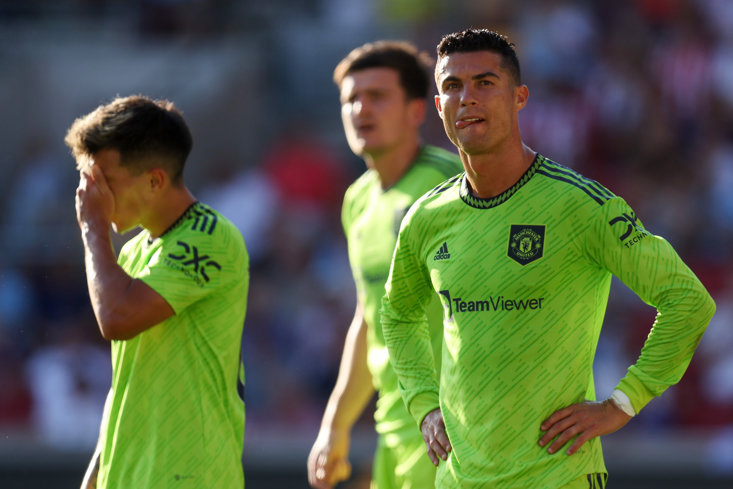 His attitude stinks for someone who has contributed so much to the beautiful game and for someone who claims to love this club. After his on-field dramatics against the Bees, it was reported that the club were growing tired of it and wouldn’t rule out terminating his contract if he didn’t change his behaviour.

To coincide with this supposed threat, it was reported on Monday night that United were launching a hefty €50 million bid for Atletico Madrid forward Matheus Cunha, who only joined Diego Simeone’s side last summer from Hertha Berlin, having been brought over to the Bundesliga by RB Leipzig. At 23-years-old, he is the right kind of long-term investment that Ten Hag needs to help transform the club's fortunes and that only comes from him building a squad to suit his philosophy.

Supporters may be concerned by his goal record last year (six goals in 29 La Liga matches) but only eight of those appearances were starts he also provided six assists, highlighting what Ten Hag is looking for in his ideal centre-forward - someone who can help improve the players around him and have an impact whatever the club's reliance on him. Cunha has earned seven caps with his national team while also representing them at the Tokyo Olympics last summer where they retained their gold medal status.

With plenty of years ahead of him, Cunha seems like a sensible investment by Ten Hag and United as not only would he offer a different and more youthful dynamic up front, something which hasn’t been seen for quite a few years, he would be learning from one of the game’s most forward-thinking coaches which will help with his development.

If some fans are still not won over by his scoring record they have to remember where they are in the pecking order for top players, with Sky Sports pundit and former player Gary Nevile labelling Old Trafford "a graveyard for players" on Monday Night Football.

With energy to help out his team and enthusiasm to play for United, Cunha looks to offer the complete opposite of what Ronaldo brings to the club. From Ronaldo's mannerisms on Saturday, it’s clear that he is unhappy at the club while the fans are unhappy with him. It is one of those marriages that both parties tried to make work but underneath the surface, they wanted different things and it was always going to lead to an acrimonious divorce. It is time for them to move on from one another.