Us Sports
News
The best of British are finding their futures catered for in the continent's top leagues
Sam Penfold
11:05, 23 Jul 2022

When you speak to people in the United Kingdom about American football they often jokingly claim that it’s just ‘rugby with pads and helmets’ and they find it ‘too boring and slow’, which is their way of saying they don’t understand one of the world's most complicated sports. But the sport is growing on these shores, with more people getting involved in American football up and down the UK year on year.

Places such as the NFL Academy (London) and Filton Pride (Bristol) are providing the opportunities to youngsters to compete, with many of the NFL Academy products seeking college scholarships over in the USA. Others might not pick up the sport until university, such as in the cases of Glen Toonga and Chad Walrond, two of the UK’s top American footballers who are putting their names on the map in the European League of Football (ELF).

The ELF is one of Europe’s biggest summer sporting spectacles and is made up of 12 teams from five nations (Germany, Austria, Spain, Poland and Turkey). Each team can have up to four American, Canadian, Mexican or Japanese players alongside eight other foreign players so competition for places is intense. As well as immense playing talent, there are coaches in the league who have been part of NFL organisations, with the most decorated being former San Francisco 49ers head coach Jim Tomsula, who is currently in charge of German side Rhein Fire.

After spells in the German and Polish domestic leagues over the past four years, running back Glen Toonga has made it to the ELF for the first time this season. It wasn’t a straight path though, with unsuccessful tryouts for the Canadian Football League draft along the way. But that setback led to him bouncing back with a strong enough 2021 with the Allgau Comets in Germany’s GFL to earn him a place in the ELF with the Hamburg Sea Devils for 2022.

“Just before going to Allgau we had the CFL draft, which didn’t go my way, but in hindsight I feel like it did,” Glen tells The Sportsman. “This is no disrespect to the CFL, but realistically I wouldn’t have gone out there to sit on the bench like a lot of guys have been and I wouldn’t want to spend my prime or the peak of my career on the bench. I feel like that would’ve made it harder to come to the ELF and get a position over one of the imports because people wouldn’t have seen my tape at Allgau, which was probably one of my best years, other than this year.”

In that 2021 season, Toonga recorded 1,099 rushing yards - the second-best record in the league - and 13 touchdowns, and so far this term in Hamburg he has notched up an incredible 881 yards and 10 touchdowns in just six games. With the season only half completed he’s almost guaranteed to have his most productive year ever.

“For me personally the season seems to be going good, I’m the leading rusher and stuff like that but I feel like it can always be better, I’m always chasing perfection. I’m hoping the second half of the season is better than my first.” 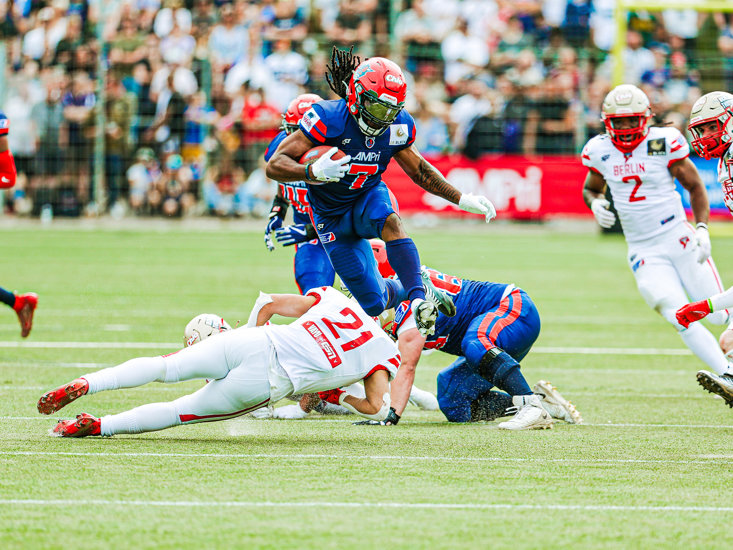 GLEN HAS BEEN ON THE EUROPEAN CIRCUIT FOR FIVE SEASONS (PIC: MICHAEL FREITAG)

At 23, Chad Walrond is four years younger than Glen but his rise is one to be admired. Having never played the sport before attending university, Chad started off as a wide-receiver before switching to play defensive back and safety in his second season, helping Hertfordshire to a national final. By his third year in the sport he was part of the Great British national team and his aspirations for further success were firmly set. In 2021, he ventured to Allgau to play alongside Glen in the German Football League. He recognises Glen’s presence as being a crucial aspect of his debut season in Europe.

“That experience was amazing,” Chad exclaims. “I’ve always said to people that Glen was my big brother. What he did for me last year, just helping me get through things but also teaching me the game and how things run in Europe, it was more valuable than getting paid more to be in a different situation.”

After his debut season in Germany, Chad was given the chance to compete at the International Players Pathway Program, which is an NFL initiative that looks to increase the number of non-American/Canadian players playing in the NFL. Unfortunately, he didn’t make it this year but he has not been deterred from chasing his goal to make it to the NFL. Now playing for the Cologne Centurions in the ELF, Chad is hoping to help his side to a play-off spot, and while it has been far from plain sailing this year, he remains optimistic about pushing on with his performances in the second half of the season.

“I’m not performing how I’d want to perform, even taking the team record out of it,” he explains. Sometimes when I watch film I’m like ‘I should’ve made that play, I should do this, I should do that’ but at the end of the day I’m still improving. I still see myself as a rookie in this game, I haven’t been playing the game for long and this is a new level so I’ve got to adjust. Now, in the second half of the season, there's no excuses. I know what to expect.” 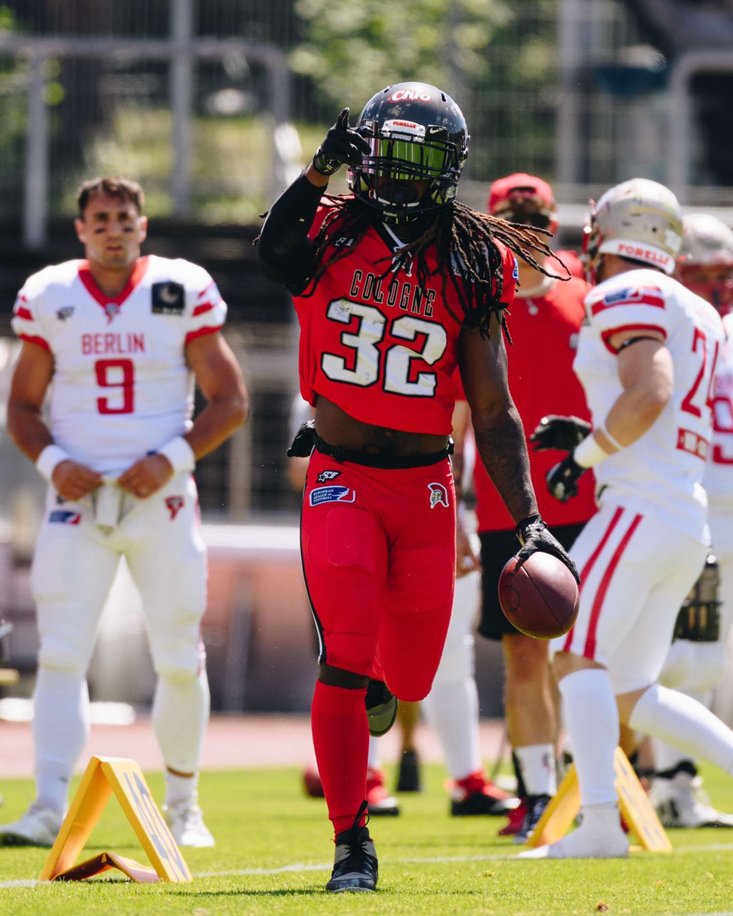 AT 23, CHAD IS A REAL PROSPECT

At home in the UK, American football is becoming a more popular sport as the quality of the game, the standard of coaching and the attention given towards it improves. But Glen and Chad are adamant that the sport in the UK is nowhere near the standard required to make it competitive enough to stop the country’s best talents seeking opportunities on the continent.

“I’d say there’s probably more talent in the UK than any of the other countries I’ve played in but I feel like the set up just doesn’t allow for guys to prosper,” Glen explains. “If I’m 16, 17 or whatever, why would I want to play in the UK? It doesn’t really offer much. A lot of young kids are looking to go to the NFL Academy or go to college [in the USA] because the UK just doesn’t offer anything that’s worth staying for.

“Even guys who are my age, I feel like, what’s the point in playing if London Warriors are always going to win, if the league doesn’t have a set-up that allows for football in the UK to be competitive. They need to do a better job of progressing the sport, even the fact that the sport is still classed as an amauter sport is crazy.”

Chad agrees wholeheartedly, adding: “The UK has so much talent, man, we have so many athletes. But it’s the coaching and the structure of American football [in Europe], that's the difference. So yes, we’ve got more talent, but it’s about the resources and having the people who will actually help the game grow.”

It’s fair to say that they aren’t alone in their views. Many UK-based players are left disillusioned with the British American Football Association for their management of the sport’s structure in the UK. Poor standards of officiating, a lack of guidance and unclear plans of progression within the game have been disappointing for all involved, and beyond the Premiership there is a steep drop in quality.

The cost is another reason for players like Chad and Glen to go abroad, where they can get paid to play rather than paying hundreds of pounds in team fees and equipment that they have to fund themselves. It makes the decision easy for any British player who is given the opportunity to play in the GFL or ELF, with the likes of offensive linemen Lewis Thomas and Francis Bongwalanga and wide receiver Montel Patterson also plying their trades on the continent.

The good news is that this country is producing some high level athletes in a sport for which the UK hasn’t always been a notable breeding ground. The next job is for the British system to catch up with the quality of its best players.