“Political context,” Uefa has called it. The governing body was first reviewing the use of a rainbow armband by Germany captain Manuel Neuer during Pride Month. Now it has cited “political context” as a reason to put a block on Munich’s Allianz Arena being lit up in rainbow colours on Wednesday when die Nationalmannschaft host Hungary in Group F of Euro 2020.

Let’s be clear here. It is only the archaic laws brought in in Hungary which gives the promotion of equality a ‘political context’. Equality ought to be a right. The freedom to be oneself ought to be a right. Uefa itself has supported movements promoting equal rights in the face of racism, sexism, homophobia and more in the past, and is clearly progressive enough to know better than this.

But in a period during which the European governing body has been flirting with the idea of moving the semi-finals and final of Euro 2020 from Wembley to Budapest’s Puskas Arena so that they can be assured that their countless commercial partners won’t be excluded due to Covid-19 protocols, Uefa has now taken the frankly ridiculous step of blocking Germany’s show of solidarity with LGBTQ+ communities.

Sure, it is no coincidence that the DFB (German FA) has come up with the idea of lighting up the Allianz Arena for the visit of Hungary shortly after new laws have been introduced in Hungary which bar the ‘display and promotion of homosexuality’ among under-18s. Yes, it is a pointed response to a political decision. But it is not the support of minorities which is a political act, rather it is the attempt to supress equality that brings what should be a natural, everyday expression into the political sphere.

Do you know what happens when football attempts to separate politics from sports? It gets political.

When it says no to lighting up a stadium in rainbow colours, it is justifying the political decision made by Viktor Orban’s Hungarian government. That is sport mixing with politics.

When it threatens to relocate matches for the sake of commercial concerns, it applies pressure on a government to relax its restrictions related to Covid-19. 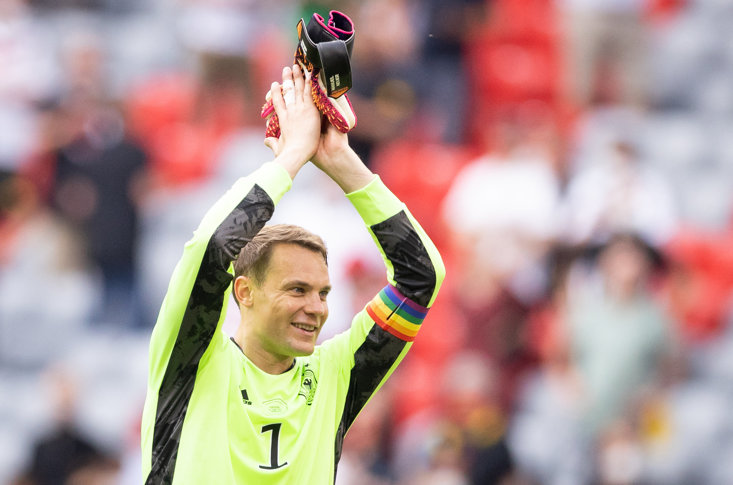 Should the UK prime minister Boris Johnson be giving the OK for 60,000 people to congregate at Wembley for the Euro semi-finals and final at a time when Joe and Dave Bloggs or Josie and Jane Public can’t dance with their friends at their wedding? No, of course not. But they have backed down and made the games part of the Events Research Programme which allow for test events simply because Uefa had threatened to move the matches elsewhere. Again, sport has got mixed up in politics.

And these are not the only examples. Just a couple of weeks ago, Uefa weighed in on Ukraine’s decision to include a map of the country on their new jersey due to the inclusion of the disputed territory of Crimea within the Ukrainian border. The shirt had provoked anger in Russia, which annexed Crimea from Ukraine in 2014, and Uefa held extensive talks with Ukrainian officials before eventually coming to a compromise which saw the map remain but a slogan proclaiming ‘Glory to the Heroes’ removed.

In supporting Russia’s stance and engaging in discussions with Ukraine, Uefa claimed to be addressing a political act within the sporting arena but ended up making a political statement of its own.

There are no easy answers, of course. If Uefa does nothing about overtly political acts, then there could be an absolute free-for-all as nationalistic agendas gain free reign within the football arena. But it also doesn’t need to get involved where it is not needed.

The decision to stop the DFB lighting up the Allianz Arena has probably gained greater publicity for the opposition to the new laws in Hungary than the actual sight of the stadium being lit would have managed, so in a way Uefa has ended up promoting the LGBTQ+ movement as an unintended consequence of its disproportionate intervention.

Yet this is just the latest example that football’s governing bodies need to think far longer and much harder before going in feet first on issues with a supposedly ‘political context’ which are simply trying to make sure that the sport is a better and more welcoming place for everybody.

x
Suggested Searches:
Manchester United
Liverpool
Manchester City
Marcus Rashford
Premier League
More
football
Gilmour’s Lack Of Playing Time At Norwich Is A Cause For Concern...
Chelsea fans are not best pleased right now. And it has nothing to do with the goings-on at their club, [ ... ]
football
Ellen White On The Brink Of History As Lionesses Welcome Northern...
When England host Northern Ireland in their Women’s World Cup qualifier on Saturday, all eyes [ ... ]
football
Arteta's Arsenal Continue To Click In Solid 3-1 Win Over Aston...
Arsenal would have looked at tonight’s clash with Aston Villa as a potential banana skin. The [ ... ]
football
Martinez Finally Getting His Chance To Shine After Years Of...
When Emiliano Martinez was an Arsenal goalkeeper he played more league games for Reading than he did [ ... ]
football
The Cherries Look To Have Found Their Identity Again Under Scott...
It was only six years ago when AFC Bournemouth completed their fairytale promotion to the Premier League. [ ... ]
football
LIVE Football News: Europa League Reaction & Arsenal v Aston...
Thursday night had a bit of everything, with a record-breaking defeat for Jose Mourinho's Roma, [ ... ]
football
When ''Arsene Who?'' Changed The Face Of English Football
“Arsene Who?” asked a headline in the London Evening Standard, while one columnist said [ ... ]
football
Hammers Show Their Quality Against Genk While Rangers Brush...
West Ham United showed their quality in Europe again as they comfortably brushed aside Genk 3-0 at the [ ... ]
football
Spurs Look Directionless As They Fall To Europa Conference League...
It was a disappointing night for Tottenham Hotspur in the Europa Conference League as they came away [ ... ]
football
Premier League Injury Updates: Romelu Lukaku Ruled Out For A...
Romelu Lukaku’s midweek injury has left Thomas Tuchel in a dilemma. He is now set to be out for [ ... ]
football
Bingoalz Is The New Game That Will Change Saturday’s 3pm Kick-Offs...
Saturday’s 3pm kick-offs just got a whole lot more exciting! Combining football with bingo, Bingoalz [ ... ]
football
Why Scholes' Slating Of Man Utd's Tactics Is A Key Moment In...
“I looked at that game thinking about Liverpool on Sunday, maybe it's the wrong thing to do, [ ... ]
football
Why Are Goalkeepers So Underappreciated In The Ballon d'Or?
The 30-man Ballon d’Or shortlist raised serious questions when it was announced. Although the [ ... ]
football
LIVE: Thursday's Europa League & Conference League Action &...
Today's action sees British sides' West Ham, Spurs and Rangers all in action tonight, as well [ ... ]
football
FPL Gameweek 9 Tips: Cancelo Can Be The Main Man At The Back
If, like me, you put a lot of faith in the expensive forward duo of Cristiano Ronaldo and Romelu Lukaku [ ... ]
football
Ronaldo Decides Atalanta Thriller While Chelsea Count The Cost...
It all went wrong for Manchester United. Defensive problems abounded on a night where they were stretched [ ... ]
football
Messi, Lewandowski Or Salah: Who Should Win The 2021 Ballon...
This year, seemingly more than ever before the interest in the annual Ballon D’or has reached [ ... ]
football
Patson Daka Nets Four To Lift Leicester City Off The Floor In...
After scoring his first Premier League goal against Manchester United at the weekend, Patson Daka just [ ... ]
football
Henrik Larsson, Jimmy McGrory And Celtic's Greatest Goalscorers...
At just 5’6”, Jimmy McGrory didn’t look like your archetypal centre-forward, but the [ ... ]
football
The Best British Player Ever? It's Time To Put Some Respect...
Tottenham Hotspur lost the game, but Gareth Bale had made them a real force to be reckoned with. He [ ... ]
football
After Bruce's Inevitable Sacking, The Possibilities Are Endless...
His departure was an inevitability in so many ways. And, frankly, this is probably a case of perfect [ ... ]
football
How Do Chelsea Solve ''Tired'' Romelu Lukaku’s Goalscoring Conundrum?
When Chelsea announced the return of striker Romelu Lukaku in the summer in a whopping club-record deal [ ... ]
football
LIVE Football News: Follow Wednesday's Champions League Action...
What a sensational night of Champions League football we had on Tuesday. Ready for more of the same [ ... ]
football
Amad Diallo: The Former Atalanta Starlet Still Has A Big Future...
When Manchester United travel to the Gewiss Stadium in Bergamo, Italy tonight to face Atalanta, there [ ... ]
football
Record-Breaking Salah Mirrors Messi As Liverpool Secure Crucial...
As Liverpool made it three wins from three in the UEFA Champions League with a 3-2 victory over Atletico [ ... ]
football
Joao Cancelo Proves To Be Guardiola's Irreplaceable Cog As Man...
Joao Cancelo has such a presence in the Manchester City side and with a goal to his name in their 5-1 [ ... ]
football
Phil 2.0? Golden Cole Can Reach Foden Goal
Just when it feels like Phil Foden has finally transitioned from future superstar to automatic pick [ ... ]
football
Rooney? Howe? Conte? Who Could Replace Bruce At Newcastle?
As things stand, Steve Bruce is the manager of Newcastle United. However, his side’s 3-2 loss [ ... ]
football
LIVE Football News: Man City, Liverpool and Celtic In European...
Happy Tuesday, everyone! Arsenal 2-2 Crystal Palace closed out the eighth Premier League gameweek, with [ ... ]
football
Everything You Need To Know About This Week's Europa League...
The Europa League is back with Rangers, Celtic, West Ham and Leicester City all in action across the [ ... ]