Local bragging rights will once again be on the line in the Betfred Super League when the Rivals Round takes place on round 20 in August, with the sport’s the most famous derby fixtures playing out across one weekend.

Following the announcement that crowds are pencilled in to return from as early as May, Rugby League fans can finally look forward to the atmosphere cranking up a few notches. And Wigan Warriors head coach Adrian Lam understands why, for the supporters as least, the Rivals Round could be the most important weekend of the season.

“It’s a highlight of the season for all Wigan fans and our club, it’s steeped in history and being a player here in the past I learned how big that was,” Lam explains. “It’s always the most exciting part of the season.”

Lam’s Warriors side will host the reigning Betfred Super League Champions, St Helens, and although the two sides played out some classics in 2020, it will be a new experience for Saints boss Kristian Woolf, who is yet to take charge in a derby with fans present. 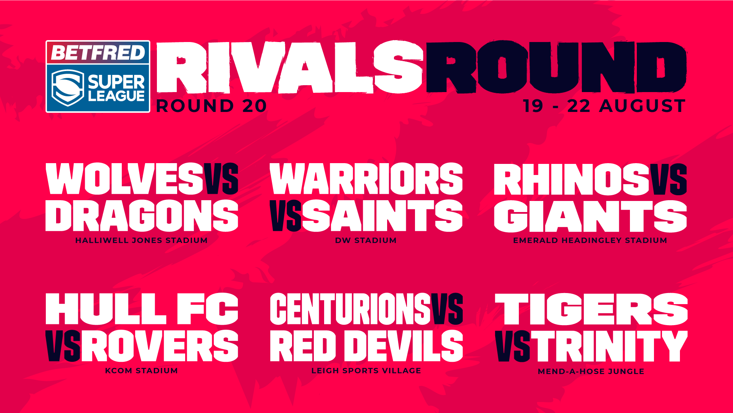 If rivalry alone wasn’t enough to get the juices flowing for this fixture, it is of course a replay of one of the most dramatic Grand Finals ever, with the 2020 showpiece having seen Jack Welsby score in the dying seconds to win the game for Saints, something that Lam is looking to put right in 2021.

“I’ve had an off-season to think about how that ended and obviously that doesn’t sit quite right with us,” adds Lam. “But St Helens have been a great team over the last three years and are at the pinnacle of rugby league here.”

And while Woolf may have been victorious on that night, he is well aware of the different kind of pressure that comes with the derby.

“The very first day I was in the supermarket and fans made it really clear that it’s a game that they look forward to the most and they want to see us win the most, and that’s one of the things I really enjoy about the game over here, those real deep-seated rivalries.”

On the same weekend we will see a renewal of the Hull Derby as Hull KR travel to the west of the city to take on Hull FC at the KCOM Stadium. Black and Whites forward Scott Taylor, who has represented both clubs, says there is no doubt in his mind that this is the biggest fixture in Rugby League.

“There is no derby like Hull,” says Taylor. “We’re in the same city, the hatred goes back longer than anything, and it’s a rugby city.”

The debate about which derby is biggest has raged on for decades amongst rugby league fans, but despite having also played in Yorkshire derbies for Castleford, Hull KR winger Ben Crooks is quick to echo Taylor’s sentiments.

“For me it’s the one and only true derby that Super League has got at the minute,” he explains. “I’ve played on both sides and never experienced anything like it.”

Betfred Super League Rivals Round will take place in Round 20, and be played across the weekend of 19 to 22 August.