Rugby League
News
Wigan win 26-0 to progress in the Challenge Cup but were made to work against a tough York side
Kieran Spratt
20:46, 09 Apr 2021

Tonight’s Betfred Challenge Cup tie between York City Knights and Wigan Warriors might have reminded older rugby league fans of the last time these two teams met, in that famous 1984 semi-final at Elland Road which Wigan edged against a stubborn York.

This time around it was Wigan again who emerged victorious, albeit in much better playing conditions, beating the Knights 26-0 in a compelling tie at the LNER Community Stadium on Friday night to progress into the quarter-finals.

It was a tidy start from both sides, especially York who threatened early on, but it was the Super League side who broke the deadlock when Zak Hardaker, a 2015 Challenge Cup winner with Leeds Rhinos, showed a terrific turn of pace to leave Liam Salter in his dust and touched down in the corner. His subsequent conversion, however, was missed.

Wigan then extended their lead to 8-0 when Sam Halsall collected a Jackson Hastings kick five metres from the line and spread the ball wide for Harry Smith to get across. Hardaker, again, missed the conversion. York were in danger of losing any grip on the game and Halsall piled the misery on the Championship side with the third try of the first half, slipping through a gap to cross the line. This time Hardaker was able to convert to increase the Warriors’ lead to 14-0.

Despite the wide margin, York performed admirably for large parts of the first half, matching Wigan blow-for-blow for the first 20 minutes, but the Super League side eventually found their feet and began to turn the heat up. Had Hardaker been more successful with his conversions, the gulf could have been much bigger.

Mirroring the first, the opening of the second half began with York beginning the brighter of the two sides once again and like the fist 40, Wigan weathered the storm and capitalised at the other end. An incredible dummy allowed Man of the Match Hastings to burst through the line, putting the try on a plate for Umyla Hanley, his first for the club. Hardaker then followed up with his second conversion of the match to bring the scoreline to 20-0. 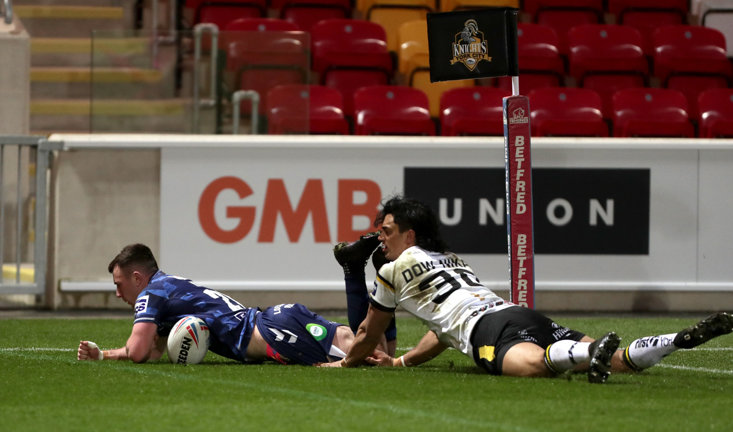 Harry Smith gets across the line for Wigan Warriors

Tony Clubb sealed it for Wigan, powering through for their fifth and Hardaker converted from in front of the posts to extend the lead to 26.

James Ford’s side, to their immense credit, were absolutely relentless until the end, and a Hanley mistake gave them some good field position but they just couldn’t get it over the line to get some deserved points on the board.

Wigan Warriors, who last won the tournament in 2013, now move into the quarter-finals which will be played between May 8-9.

Elsewhere in the Challenge Cup, a 99th-minute drop goal from Gareth O’Brien helped Castleford Tigers edge out Hull KR 33-32 in a fascinating tie. Rovers looked to have booked their place in the quarter-finals at 32-18 up and with just nine minutes on the clock, but the Tigers to mounted a stunning late comeback and snatched the win in golden point.