Leeds Rhinos have booked their place in the Betfred Super League semi-finals after securing an 8-0 win at the DW Stadium over Wigan Warriors. It was a phenomenal defensive display from Richard Agar’s side who kept the home side at bay all night long, while Adrian Lam, in his last game in charge of Wigan, did not get his fairytale finish.

Oliver Gildart and Jackson Hastings also played their final games for Wigan before leaving for Australia, while Tony Clubb’s playing career also came to an end as tonight marks a true and of an era for the Warriors. For Leeds however, this defensive display shows they could cause a shock in the final four.

It was not the prettiest encounter, to say the least, but Leeds had all the answers to a Wigan attack that was blunted on the night. The first five minutes saw a 40-20 attempt from Wigan’s Jackson Hastings, snuffed out by Richie Myler in the nick of time, and very few handling errors until Leeds’ Tom Briscoe just played the ball behind his last man out of touch. High tackles from Oliver Partington and Liam Farrell resulted in Leeds seeing more of the ball than Wigan, with the Rhinos holding good discipline in the chase to keep pressure on the Warriors at the start of their sets.

The flow of the game was positive from both sides, with metres being earned through grit. There were signs of the try-line for Wigan, however the final pass and kick was eluding them, with Hardaker fearfully trying an off-load before being forced into touch that returned possession to his former side, Leeds, succeeded by a Leeds forward pass, returning the ball into the hands of the Cherry and Whites.

The feisty tackles continued past the quarter mark of the game. Leeds still managed to defend tidily enough to prevent any try leaks, however Leeds struggled to retain possession, with unproductive sets and errors aplenty. Richard Agar’s Rhinos struggled to find the same intensity and rhythm that they showed just weeks ago against Wigan when they beat them to-nil at the DW Stadium.

One praise for Leeds was that the kicking game of the Rhinos was superb, finding Wigan players just metres away from their try-line and applying pressure immediately, trying to earn themselves a drop-out.

The first proper break in the game came after a chance was created by Wigan’s Harry Smith, who found a huge gap for Zak Hardaker, but Ash Handley managed to get on the end of it before the former Man of Steel, only to be clattered into by a sliding John Bateman, albeit an accidental collision, leaving Handley needing a bit of attention.

The end of the first half might’ve finished scoreless but it was certainly an enjoyable half of rugby league with the mistakes and attritional nature of the game taking centre stage of any individual pieces of skill. 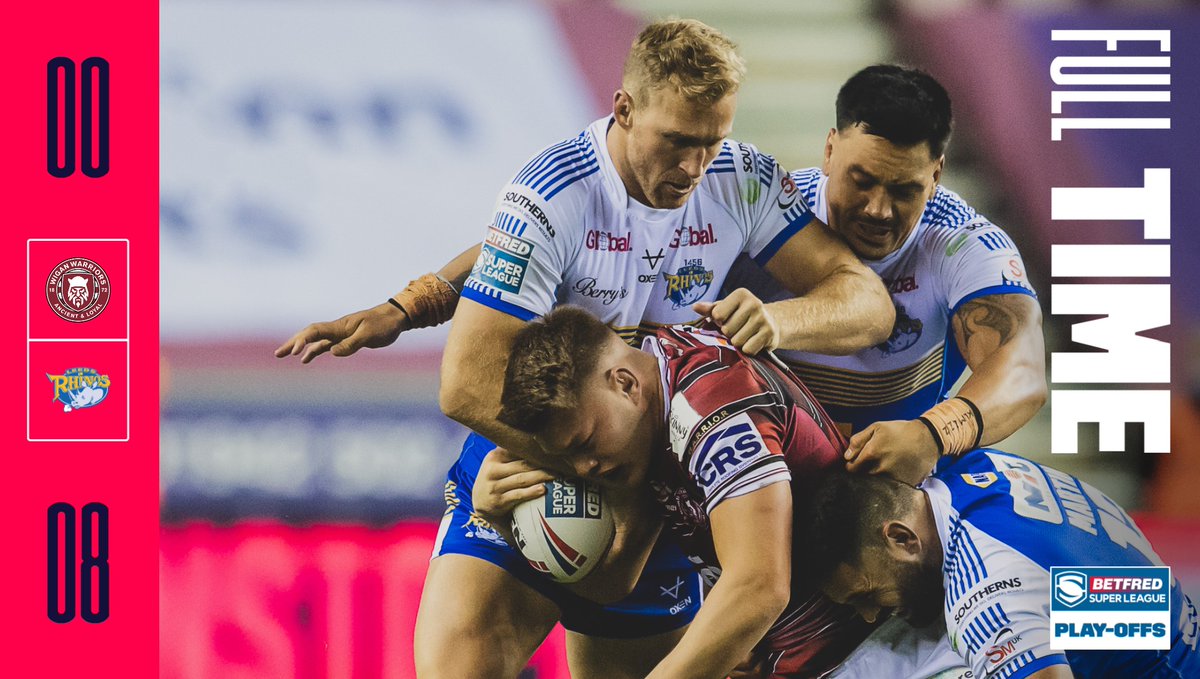 Brad Dwyer attacked the second half as Leeds came out firing but that initial move ended in a knock-on as Rhyse Martin only got his fingertips on it. However, the Rhinos’ early second half pressure would eventually lead to the breakthrough, after 50 minutes of breathless play.

Leeming sent a kick up in the night sky and as it dropped, Richie Myler beat Jake Bibby in the air and managed to knock it to Ash Handley who had the easiest of finishes for his seventh try of the season. Martin made the conversion and that score sparked the traveling fans into voice as ‘Marching on Together’ rang around the DW stadium.

Harry Smith launched a crossfield kick towards the Leeds corner as Wigan attempted to hit back but an impressive catch from Luke Briscoe averted the danger. Briscoe was forced to mop up again after another impressive set from the home side but the visitors held firm as the clock ticked on.

With 15 minutes left, Warriors began to ramp up the pressure and Richie Myler got away with a knock-on as the ball rebounded off his foot from another Smith high kick. With ten to go Marshall collected a kick from Lui, but was deemed to have knocked on in a tackle and Leeds on the 20m line, worked it into a position for Leeming to kick for a point, but he sliced his chance wide.

Wigan’s Oliver Partington then was adjudged to have made a high tackle with seven minutes to go, and in giving away that penalty the home side saw their chance of victory evaporate. Martin’s reliable boot saw Leeds extend their lead to eight and the victory was confirmed when a Wigan charge down also resulted in a Leeds penalty.

Those small moments and a top defensive performance from the visitors brought the curtain down on Wigan’s season. It is certainly the end of an era for the hosts but for Leeds, well they go marching on into the semi-finals.

We will find out their final four opponents tomorrow night as Warrington Wolves play Hull KR.