Football
News
If England are to host another major tournament, they will need to prove that Sunday's abhorrent scenes cannot be repeated
Simon Lillicrap
17:05, 13 Jul 2021

England’s bid to host the 2030 World Cup along with the rest of the United Kingdom and Ireland looks dead in the water before it has even begun. Some of the scenes at Wembley for the Euro 2020 final were not only vile and abusive, but showed serious flaws in the security around the ground.

It is thought up to 5,000 fans unlawfully forced their way into the stadium without tickets, while some fans were assaulted and others openly snorting cocaine in public. This was meant to be England’s most glorious day, instead it turned into an embarrassment. For so long we have wanted a football team and a manager to be proud of, and now we have men who represent all the good values in life on the field, it is a crying shame the minority of fans off it are intent on spoiling the experience for everybody.

There are bigger consequences to just this one nightmarish evening. The UK and Ireland will bid for the 2030 World Cup, and although the government has vowed to pour money into the bid, that now appears to be a complete waste of resources and time. There is no way, after the scenes that unfolded on Sunday night, a final of a major tournament will not be considered at Wembley for quite some time.

More than that - those ignorant spectators don’t deserve it. They are the minority and the overwhelming condemnation of those involved is heartening, but what on earth will UEFA and FIFA make of the events that surrounded the Euro 2020 final?

“The culture of abuse is just unacceptable,” England legend Stuart Pearce told The Sportsman. “I was at Wembley for the game, pre-game and after the game and I must say there were one or two scenes that weren't pleasant around, big drinking culture, that type of thing in and around the ground which wasn't pleasant. If I was taking a young child to the game I would be very uncomfortable.” 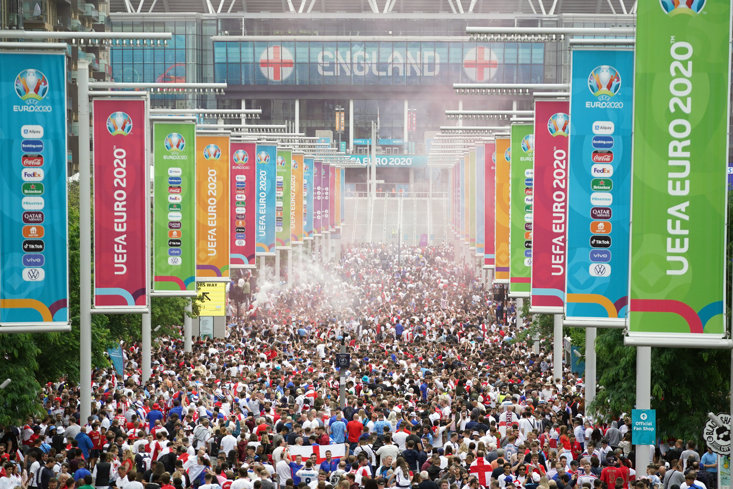 The level of security around Wembley wasn’t good enough. At other grounds, such as Italy’s Stadio Olimpico, you cannot get within 500m of the stadium without a match ticket, yet on Wembley Way, thousands of spectators were allowed to wander up to the doors of the stadium.

The scenes were utterly abhorrent and the people involved were shameless, but we can count our blessings that somebody with even worse intentions than breaking into the stadium wasn’t present. If England are to host another major event, they will need to prove that security has been tightened and these scenes will not be repeated.

This failure is tough on security staff who were underpaid and threatened with violence, but also on Scotland, Wales, Northern Ireland and Ireland. Their fans, who are on the whole warm and welcoming, have done nothing to see their World Cup bid spoiled by English hooligans.

UEFA’s president Aleksander Čeferin can only back one European bid, and his support carries heavy weight with FIFA. Now he has the choice to back Spain and Portugal’s Iberian bid (a summer World Cup there sounds glorious), the Eastern European bid, or this UK and Ireland bid. There seems to be one safe bet there.

In truth, it seems unlikely that a European bid will win anyway. 2030 will be the centenary year of the very first World Cup and Uruguay, the very first hosts and winners, have launched a bid with their South American neighbours Argentina, Paraguay and Chile. In such a historical year, with the chance to play the final at the very same stadium in Uruguay, this surely is the favourite to host the tournament.

England may never have a better chance to win a trophy than the one that passed them by at the weekend. The players and manager may keep on improving, but due to the behaviour of some, they may never get the opportunity to play another final on home soil.