Football
News
Sam Allardyce faces his first relegation from the Premier League after West Brom were beaten 3-1 at the Emirates
Kieran Spratt
21:17, 09 May 2021

Sam Allardyce’s proud record of having never been relegated from the Premier League came to an end on Sunday evening after West Brom suffered a 3-1 defeat to Arsenal at the Emirates, condemning the Baggies to the Championship after a single season in the top-flight.

Allardyce’s men fought bravely and looked the better side before two first-half goals in quick succession from the home side left them dumbfounded. They grew back into the game and even looked like they might snatch a point at the end but any hope of a great escape was extinguished when Willian notched his first goal in an Arsenal shirt.

West Brom were well on top when the deadlock was broken on 29 minutes, with seven shots on goal to the Gunner’s two, but it was Arsenal who took the lead when Willian slipped the ball into the path of Bukayo Saka, who whipped the ball into the Baggies penalty area, picking out Smith Rowe to volley in for his first goal with club.

The Baggies had been resolute up until that point but the goal left them shell-shocked and Mikel Arteta’s men doubled their lead just five minutes later thanks to an absolute beauty from Nicolas Pepe, cutting in off the right before curling the ball beyond a helpless Sam Johnstone and into the top corner. Arsenal fans might not have seen much return since signing the £72m Ivory Coast international, but that goal was top-draw.

West Brom gave themselves a glimmer of hope at saving their season with just over 20 minutes to go when Matheus Pereira, the visitor’s best player throughout, drove forward, leaving Dani Ceballos in his shadow, before hitting a low strike beyond Bernd Leno, giving the Baggies the faintest of lifelines. It should have been 2-2 shortly after when an unmarked Darnell Furlong glanced Matt Phillips' cross mere inches wide.

Relegation was wrapped up through Willian. Playing probably his best game for the north Londoners since joining from Chelsea, the Brazillian picked out the top corner with a fine free-kick from 25 yards out to doom West Brom to their 11th drop from the top-flight - only Birmingham City have been relegated more. 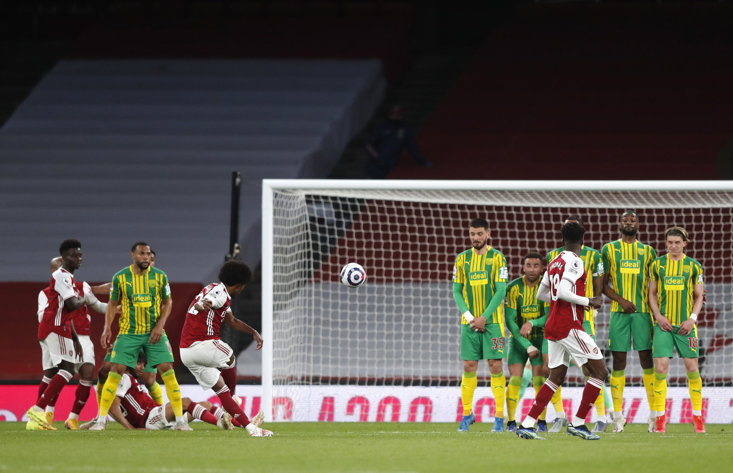 Arteta and Arsenal really needed that win, their first at home in two months, after their mid-week Europa League heartbreak. They certainly weren’t great this evening but showed real class in some areas - none more so than with Willian and Pepe’s goals, which will both be in contention for the club’s goal of the season.

Speaking after the game, goal scorer Smith Rowe said, "We started a bit slow, our heads have been down for a couple of days. It was important for us to bounce back. I felt we got into the game in the second half and we are really happy with the three points.

"It has been a dream playing for this club and to finally score my first goal - can't be better.

"It has been a difficult week but happy to get the three points.

"It has been really difficult for us as a team, it is not nice to lose in the semi-final of a tournament, it is important we keep our heads up."