The 2019 Wimbledon Championships are finally here and it looks set to be one of the most open tournaments in years for both the men’s and the women’s singles. Below we take a look at some of the world’s oldest tennis Grand Slam’s record breakers...

The Swiss Maestro is arguably the greatest player in tennis history so it comes as no surprise that he tops the most Wimbledon wins in the men’s singles. Federer is also the only player in history, in both the Amateur and Open Era, to reach the Wimbledon men's singles final eleven times.

Best known for his successful Doubles partnerships with Mark Woodforde and Jonas Björkman, Australia’s Todd Woodbridge is among the most successful doubles players of all time, having won 16 Grand Slam men's doubles titles and a whopping nine of those at Wimbledon.

One of the best female tennis players of all time, Martina Navratilova triumphed at SW19 nine times between 1978 and 1990. She reached the singles final twelve times, including a run of nine consecutive years and a run of six consecutive titles which is widely regarded as the best performance by any professional player at a major event.

California’s Elizabeth Ryan won 26 Grand Slam titles throughout her career and nineteen of those titles were in women's doubles (12) and mixed doubles (7) at Wimbledon, an all-time record for both events.

Back in 2010 on Court 18, John Isner and Nicolas Mahut played out an absolute beast of a game that spanned three days. The entire duration of the game was 11 hours and 05 minutes and the final set lasted an incredible 8 hours and 11 minutes, an hour and 38 minutes longer than the previous longest match in history.

980 points were played in total - to put in comparison, Serena Williams won 789 points over the seven rounds it took her to win the women’s singles. 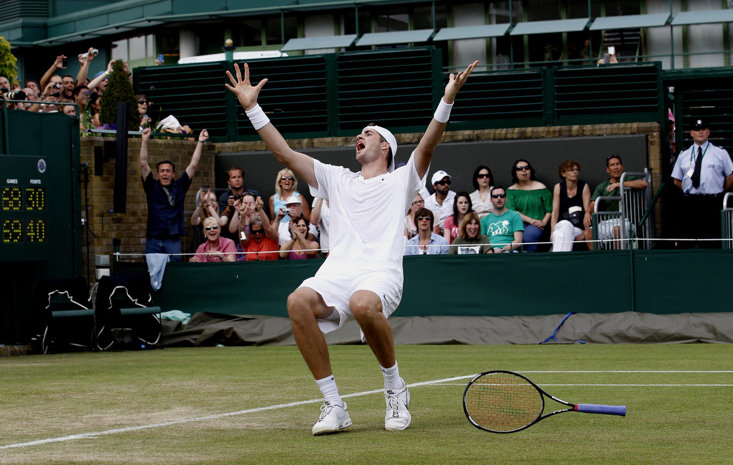 The quickest serve at Wimbledon was by Taylor Dent at a stunning 148mph in 2010, with Andy Roddick’s 146mph effort from 2004 the second fastest. Canada’s Milos Raonic also came close in 2015, when he rattled off a 145 mph serve against Tommy Haas.

Venus Williams set the women's record of an eye-watering 129mph serve back in 2008. She holds the record for fastest serve at three different Grand Slams including the 2007 French Open and 2007 US Open.

John Isner has the most aces in a tournament with 214 during the 2018 Wimbledon, and he has the most in a single match with 113 during his mammoth 11 hour encounter with Nicolas Mahut.

Serena Williams holds the record for most aces at Wimbledon in the women’s singles when she picked up an impressive 102 in 2012, where she would go on to win the title.

At 35 years and 11 months old, Roger Federer became the oldest winner of the men’s singles in 2017 when he beat Marin Čilić to claim his eighth title.

Having turned a professional a year earlier, Boris Becker stormed to his first Wimbledon title at just 17-years and 228 days old in 1985. He also became both the first unseeded player and the first German to win the Wimbledon singles title at the same time.

Charlotte ‘Lottie’ Dod became the youngest player ever to win a Wimbledon singles event all the way back in 1887 when she won at the age of just 15 years, 285 days. We might be waiting a while for this one to be broken.

The 2009 Wimbledon Championships saw the highest ever day attendance in the Open Era when just three days in, 46,826 fans made their way to SW19. The overall attendance of the entire tournament that year was 511,043, a frightening amount of strawberries and Pimms.