Wednesday may have marked the end of an era. The great Roger Federer hinted that his quarter-final defeat against Hubert Hurkacz may have been his final appearance at Wimbledon.

The 20-time Grand Slam winner bowed out at the All England Club after losing in straight sets, which included his first ever set loss to love in his SW19 career. And for the first time, he gave a hint that this could well be the last time we see the great Roger Federer at the Championships.

He said: “Of course I would like to play it again but at my age you never know what is around the corner. I will talk with my team and go from there, see what I need to do to get in better shape and be more competitive.”

It was clear to see the eight-time Wimbledon champion was gutted with his exit and how he performed as he put in a display that was alien from what we have seen from the Swiss great over the years in south-west London.

The 39-year-old added: “My goal for the last year was to play another Wimbledon. I was able to make it this year, which I was really happy about. Everything that comes after Wimbledon we will sit down and talk about it.

“I’m actually very happy to get as far as I did, even though I am disappointed I lost.” 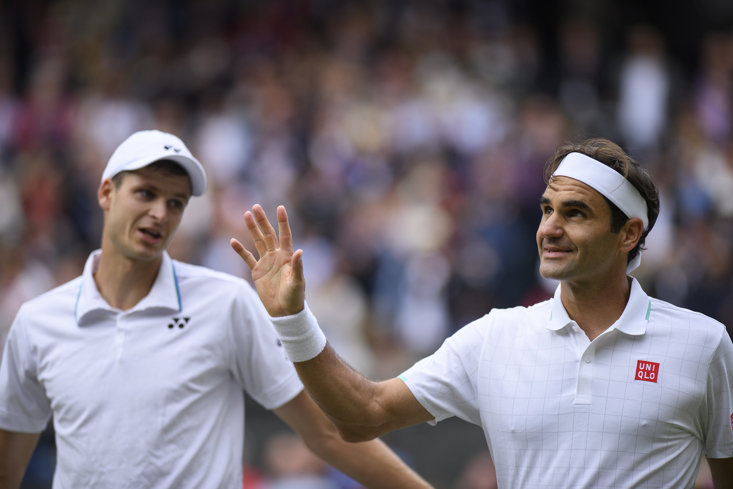 FEDERER EXITED AT THE HANDS OF HUBERT HURKACZ ON WEDNESDAY

This was only Federer’s fifth tournament in 17 months after needing two operations on a knee injury last year. There had been doubts over his shape coming into the Grand Slam he loves the most, having suffered a humbling defeat at Halle last month which left him uncharacteristically dispirited. It blew up in Federer’s clash with Hurkacz as he lacked the confidence and the assurance that he normally has bursting out of him in SW19. He looked exhausted and in pain, physically and mentally.

With Federer turning 40 next month it seems that Father Time has eventually caught up with him and there were glimpses of this in the earlier rounds of the Championships. The Swiss narrowly avoided a huge upset in the first round when injury robbed French star Adrian Mannarino the chance of a momentous win. A ponderous Federer had his timings all wrong and he trailed two sets to one before Mannarino was forced to retire.

He did improve in the rounds that followed before Hurkacz, which included his win over Britain’s Cameron Norrie, but he lost his rhythm against the Polish star and Hurkacz’s clinical performance gave Federer no chance of getting lucky for a second time.

Ageing is inevitable, and while Federer wanted one more Grand Slam title at his beloved Wimbledon, he should take pride in all he has given to this sport and the countless young people he inspired to pick up a racquet and chase their dreams. Undoubtedly one of the greatest tennis players of all-time, Federer will leave a lasting legacy on the sport and Wimbledon for generations, regardless of whether this was his last hurrah at the tournament.

x
Suggested Searches:
Manchester United
Liverpool
Manchester City
Marcus Rashford
Premier League
More
tennis
Novak Djokovic Is Right, It's Time To Get Serious About Player...
The judgement on player welfare has often been clouded by the amount of money these sporting superstars [ ... ]
tennis
20 Times A Champion - But Why Is Novak Djokovic Not Loved Like...
Novak Djokovic’s 20th Grand Slam title at Wimbledon on Sunday saw him go level with tennis’ [ ... ]
tennis
Djokovic Makes History With 20th Grand Slam Men's Singles Title...
Novak Djokovic has won his 20th Grand Slam singles title – equalling the men’s record held [ ... ]
tennis
Ashleigh Barty Emulates Evonne Goolagong 50 Years On With First...
World number one Ashleigh Barty has emulated Australian legend Evonne Goolagong and won Wimbledon for [ ... ]
tennis
Italy Eye Up Super Sunday As Berrettini Faces Djokovic In Wimbledon...
It could be a very special Sunday for Italy as their men face England in the Euro 2020 final and now [ ... ]
tennis
Wimbledon Men's Semi-Finals: Can Anyone Stop Novak Djokovic...
The men’s Wimbledon semi-finalists were confirmed on Wednesday after some intense quarter-final [ ... ]
tennis
Ashleigh Barty To Take On Karolina Pliskova In Women's Wimbledon...
World number one Ashleigh Barty will play Czech eighth seed Karolina Pliskova in Saturday's Wimbledon [ ... ]
tennis
Wimbledon Women's Semi-Finals: Barty The One To Beat As Sabalenka...
The women’s Wimbledon semi-finalists were confirmed on Tuesday after a brutal round of quarter-final [ ... ]
tennis
Canadians Auger-Aliassime And Shapovalov Out To Make History...
Wimbledon is loved for its rich history and we get to witness another piece of it as the quarter-finals [ ... ]
tennis
The Pressure Is On World Number One Ashleigh Barty Ahead Of...
The women’s world number one Ashleigh Barty has so far justified her ranking at Wimbledon as she [ ... ]
tennis
Coco Gauff Won’t Be Fazed When She Takes On Former Wimbledon...
As we enter the second week of Wimbledon and into the round of 16, a lot of eyes will be on young Coco [ ... ]
tennis
He's Not The Same Andy Murray, But There Might Be Plenty More...
It was a bittersweet Wimbledon return for Andy Murray after four years away from the men's singles as [ ... ]
tennis
'Unbreakable' Emma Raducanu Could Be The Future Of British Tennis
On the week of 13 October 2002, Westlife’s ‘Unbreakable’ hit the top of the UK singles [ ... ]
tennis
As Serena Exits Wimbledon, Have Her Hopes Of A 24th Grand Slam...
It wasn’t supposed to end this way. When Serena Williams beat her sister Venus in straight sets [ ... ]
tennis
Andy Murray Laughs Off Retirement Talk After Comeback Wimbledon...
Andy Murray was a slight betting underdog when he took to centre court for the first time in four years [ ... ]
tennis
World Number One Djokovic Is The Perfect Lesson For Promising...
Young Briton Jack Draper faces world number one Novak Djokovic on Centre Court at Wimbledon on Day One [ ... ]
tennis
16 Years After His Wimbledon Debut, This Summer Could Be Andy...
It’s summer 2005. The sun is shining, Wimbledon’s grass courts are greener than ever, the [ ... ]
tennis
Wimbledon Is Back - But How Will It Look This Year?
Wimbledon is back this summer after a forced absence last year, although things are set to look a little [ ... ]
tennis
The Tennis Stars To Look Out For At SW19 As Wimbledon Qualifying...
As the Wimbledon qualifiers get underway today there will be some unfamiliar faces who will be looking [ ... ]
tennis
The British Tennis Superstars Ready To Light Up The Court At...
We are deep into June and that can only mean one thing, Wimbledon is just around the corner and the [ ... ]
tennis
With Nadal Out And Federer Struggling, Who Can Stop Novak Djokovic...
Novak Djokovic will continue his bid to become the first male player in history to win the ‘Golden [ ... ]
tennis
Ignore The Andy Murray Comparisons, Jack Draper Is Forging His...
Jack Draper is going to face an awful lot of premature Andy Murray comparisons. He’s British, [ ... ]
tennis
Why Novak Djokovic Is Already The Greatest Male Tennis Player...
It’s time to start talking about Novak Djokovic as the greatest male tennis player of all time. [ ... ]
tennis
Djokovic Sends Nadal To Third Loss In 108 French Open Matches...
Rafael Nadal succumbed to only his third-ever defeat at the French Open on Friday evening at the hands [ ... ]
tennis
Who Are The Female Semi-Finalists In The Women's French Open?
A Russian, a Slovakian, a Czech and a Greek walk into the French Open semi-finals. We are now down to [ ... ]
tennis
Alfie Hewett And Gordon Reid Are Britain's Dominant Duo To Be...
Ant and Dec, Morecambe and Wise, Torvill and Dean. Now Britain has another remarkable pairing to [ ... ]
tennis
Is Serena Williams Finally About To Equal Grand Slam Record...
It has been more than four years since Serena Williams won the last of her 23 Grand Slam titles back [ ... ]
tennis
Coco Gauff's Maturity Is Admirable As She Targets French Open...
At the age of 15 years and 3 months old, Coco Gauff burst onto the scene in 2019 as the youngest player [ ... ]
tennis
Lessons Must Be Learned Across The Whole Of Sport Over Naomi...
Following Naomi Osaka’s decision to withdraw after the first round of the French Open, the authorities [ ... ]
tennis
A Compromise Must Be Found As Naomi Osaka Fined $15,000 For...
Following her excellent first round display at Roland Garros, Naomi Osaka is being threatened with expulsion [ ... ]