Tonight’s match will be bittersweet for Antonio Conte as Tottenham travel to Stamford Bridge to face Chelsea in the Carabao Cup semi-final first-leg. It is going to be his first time back at his former club since his departure in 2018 and he will hope to haunt his old employers as he looks to take one step closer to gaining his first piece of silverware with Spurs.

Chelsea fans may think less of the Italian since he joined their London rivals earlier this season but they cannot forget the impact he had there before things turned sour, after all, even in the rough second season he still won them an FA Cup. The Blues faithful have a new leader themselves in Thomas Tuchel, who has already given them their second Champions League title, and got them back in contention for the Premier League, but there are several comparisons to be made between the two.

Both are elite managers and both have already shown that they can have instant impacts on squads they inherit. For Tuchel, he immediately decided the group of players he had at his disposal were going to be best-suited to playing a 3-4-3, which arguably Conte laid out the blueprints for during his tenure with the Blues. Like Tuchel with Ben Chilwell and Reece James, Conte loved to get his wing-backs pushing up high as part of his attacking play with current Blue Marcos Alonso and the now-departed Victor Moses key members of his title-winning team .

With the two coaches both preferring this system above any other, this evening’s contest should provide an interesting battle and a glimpse of who the greater tactician is of the pair, as the set-ups could cancel each other out in the early stages of the game. Conte does also like to play a 3-5-2 which he has used at Spurs and during his successful Serie A triumph with Inter Milan last year and perhaps a slight tweak could secure him a famous win at his old stomping ground.

The 52-year-old will be eager to get one over on his old employers to rub more salt in the wound for Blues owner Roman Abramovich, who had to shell out £26million to the Italian in compensation and legal fees following his sacking. Regardless of Conte’s return to west London, this game was always going to be huge, especially in a cup semi-final. 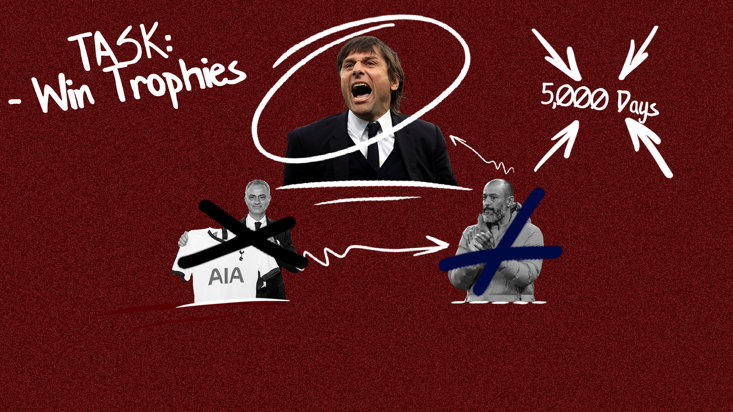 Another comparison between the duo’s reigns at Stamford Bridge is that they both had trouble with a striker. For Conte, it was his own doing as he exiled Diego Costa during his second season after deeming him to be surplus to requirements. And Tuchel this past week has had to manage a controversial interview by record signing Romelu Lukaku, who had played so well under Conte at Inter Milan.

Conte’s dismissal of Costa, after he got an abundance of goals out of the Spaniard, with 20 coming in the Premier League as Conte marked his debut season with the league title, was a bizarre set of circumstances and one that Tuchel will not want to replicate. Lukaku is expected to return tonight but the German has not been able to get the very best out of him, which many would have expected, and his position in Tuchel’s system will come under some scrutiny after his tell-all interview last week.

It will be interesting to see the reception Conte receives upon his return. It would be fair to assume that it will be mixed, but it is worth thinking of him as one of the grand architects of Chelsea’s recent history. Although there may have been a slight slump with Maurizio Sarri and Frank Lampard, Tuchel has come in and moulded something similar in a bid to surpass the work that the Italian carried out four years ago.

With a Champions League trophy to his name, arguably he already has.