The competition between Chelsea and Arsenal this season has been quite special. The two sides have set themselves apart from the rest of the Women’s Super League and this afternoon they collide in an FA Cup semi-final that will only add to this growing rivalry

This game will not only help one of these two titans take a step closer to another piece of silverware, but it will give one of them one last crack to get a psychological edge ahead of the final weeks of the WSL campaign, where just a single point separates the London adversaries with four games to go.

It was only in December that last year’s FA Cup final was held and it was these two who went head-to-head at Wembley Stadium. Emma Hayes’ Blues ran out as comfortable 3-0 winners against the Gunners to complete a late but well-earned domestic treble for 2020-21.

Chelsea’s top scorer Sam Kerr scored a brace in that final and has been in remarkable goalscoring form all season with 19 in all competitions. The Australian international has the ability to settle a game of this magnitude on her own and her clinical edge when given a chance is something to be feared by the Gunners’ defence.

However, she is not the only one with the capability to do so in this crunch clash. Arsenal striker Vivianne Miedema is a legend of the game in her own right, having broken WSL records left, right and centre. She has 16 goals to her name in all competitions this season whilst not having always played up front like her fellow forward Kerr. Miedema heads into this afternoon’s game full of confidence having scored six goals for the Netherlands inside 53 minutes in their 12-0 victory over Cyprus over the international break. 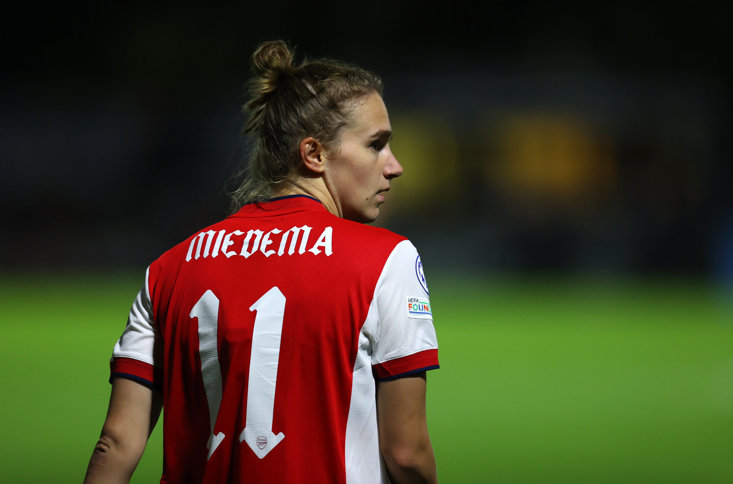 Chelsea were really hitting their stride before the pause and were scoring for fun. They amassed 19 goals in their last three matches and look more than ready for this semi-final to secure back-to-back trophies as well as their third consecutive league title.

Away from the impact this game will have on the proceedings in the WSL, the hosts will be desperate to get revenge for December’s heavy final defeat and Jonas Eidevall will be hoping that his players have learned a lot since then and that they can channel their performance from the opening day of the season where they beat the Blues at the Emirates Stadium in the league.

Arsenal will hope that the home advantage can help carry them through the gruelling 90 minutes with Meadow Park confirmed to be a sell-out with just over 4,000 set to be in attendance.

The supporters know just how crucial this game is at this key stage of term and there is sure to be an electric atmosphere as the two best sides in the country battle it out for a trip to Wembley next month.