Tennis
News
This year is the 20th anniversary of the Australian's only Wimbledon singles triumph, one of two grand slams he won in his career
Hector Nunns
17:05, 29 Jun 2022

When the great Wimbledon men’s champions are discussed, Australia’s pugnacious Lleyton Hewitt is occasionally mentioned as something of an afterthought among the Fedrerers, the Samprases, the Djokovics and the Borgs.

And yet that does the former world No1 a grave disservice. This is the 20th anniversary of his only Wimbledon singles triumph, one of two grand slams Hewitt won in his career – the other coming in New York at the US Open.

And the crowning moment of his tennis life came as he emerged victorious from a slaughter of the tournament’s seeds – leaving home favourite Tim Henman once again disappointed by taking him out in the semi-finals, before ruthlessly destroying surprise finalist David Nalbandian 6-1, 6-3, 6-2 to earn the right to lift the famous gold trophy.

There was some alignment of the stars for Hewitt that year. Defending champion Goran Ivanisevic had a shoulder injury and did not appear. The emerging Roger Federer lost to young Croatian Mario Ancic, while Pete Sampras’s defeat to George Bastl was a seismic shock. Andre Agassi fell to Paradorn Srichapan and all bar Hewitt and home hope Tim Henman – seeded four and in the same half of the draw – had fallen from the top 17 seeds by the fourth-round stage.

But everything in Hewitt’s being knew this was his chance, and he was not about to let it pass him by. The terrier, never-say-die attitude he always brought onto court was never better deployed than in the semis and the final as he homed in on his target. A magnificent returner of the ball even at the highest speeds, Hewitt was primarily a baseline counter-puncher – and if there has been a better retriever of lost causes on a tennis court, then very few have seen one.

Reflecting on his triumph, Hewitt said: “I still remember it like it was yesterday – it was a fantastic feeling. I went in there as the No1 seed in 2002, and so the pressure was on me in terms of you don’t know how many opportunities you are going to get to win the tournament.

“I felt like our half of the draw was a lot stronger than the other half. And it was kind of like a final when I went out to play Tim Henman in the semi-finals. I knew Tim really well, we had played a lot of doubles matches together as well and played Queen’s finals against each other.

“So I had that added pressure, but Tim had made semi-finals at Wimbledon without getting to the final and felt this was his big opportunity. I played a great match and ended up winning in straight sets after weathering the storm of the crowd, and blocked that out as much as possible. That was one of my greatest grass court matches.” 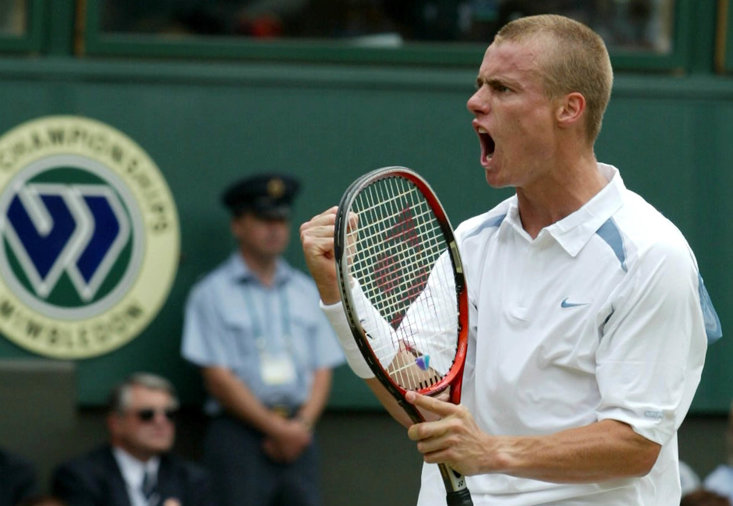 He said: “Wimbledon means an awful lot to the Australians back home. It’s what every Australian kid that picks up a tennis racquet dreams of to be in a Wimbledon final.

“There is never an easy grand slam final, you have got to go out there and get the job done. It was a strange feeling because playing David Nalbandian I was trying to control my emotions out there, but I got off to such a good start. I won the toss and chose to receive to put pressure on him straight away. I knew I was the best returner in the world at the time.

“I was hitting the ball extremely well from the baseline and if I could break him first game that was going to break his heart straight away especially on grass. He double-faulted, obviously nervous, and played a tight game. I was able to break and then really put my foot down.

“We had a streaker come on the court at one stage, and there were one or two rain delays, so it was hard to keep that momentum going. In the end I was up two sets to love and 5-2 in the third with a double break. And you are sitting there at the change of ends wanting to get out there and serve for the Championship, but also wanting to suck it up and enjoy it.

“It was awesome to go up to family and friends there in the box. Jason Stoltenberg was one of my close mates on tour and my coach at the time. Earlier that year in the Australian summer I had had chicken pox and couldn’t play the Australian Open properly. So we had come a long way to get that slam, and I pretty much didn’t put a foot wrong for two weeks.

“Winning the title is an amazing feeling, it is the greatest tennis club in the world. You go there as a junior and you feel that tradition and get the goose bumps. But to go back there knowing you have been able to hold up that great gold trophy is an amazing feeling, and to walk through and see your name on the boards as a member is incredible something I never forget.”